Last week, it seemed like MyKayla Skinner's Olympics and gymnastics career was over. Now, she's an Olympic medalist. 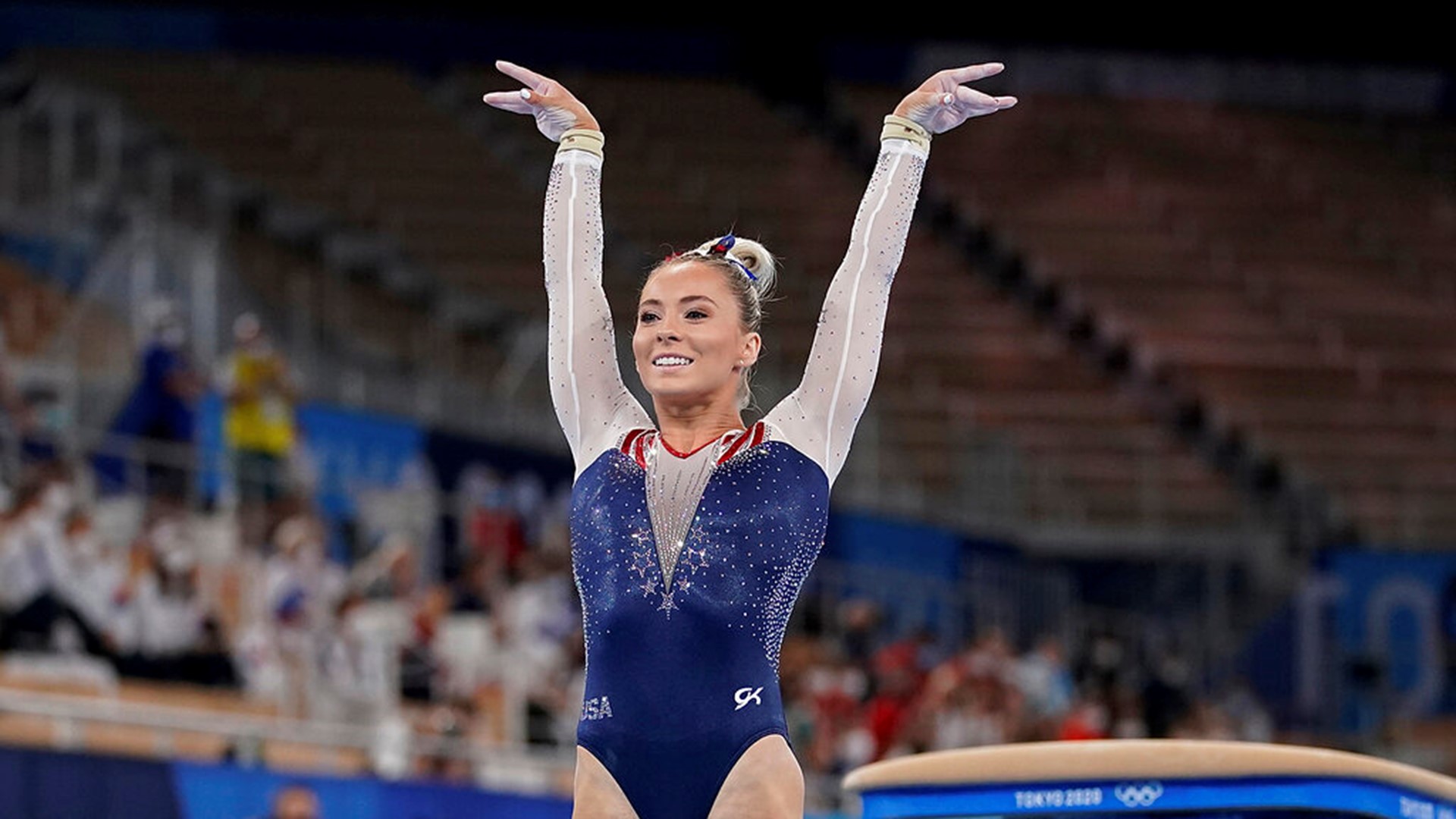 TOKYO, Japan — She launched herself off the vault, stuck the landing and saluted, then MyKayla Skinner heard the roar from her teammates watching in the stands. One voice seemed louder than the rest — Simone Biles, rooting for Skinner in what would become a silver-medal winning performance.

"I knew she was going to be the loudest one in there tonight," Skinner said.

Skinner had always dreamed of competing at the Olympics, and described the unexpected, 11th-hour opportunity as a "one in a million" chance that she was not going to waste.

She was not supposed to be there, competing on vault in the women's event finals Sunday.

She had the fourth-highest score during qualifications. But the rules allow each country a maximum of two athletes in the finals. Biles and Jade Carey finished first and second, pushing Skinner from the competition.

She was devastated that her Olympics — and her gymnastics career — appeared to have ended at qualification. She was preparing to get on a plane to fly home.

"This is closing the book on my gymnastics career," she wrote. "For now I will just try to fill the hole in my heart."

But then Biles struggled at team finals Tuesday and withdrew from that competition. Biles told her coach to text Skinner and tell her to stay, just in case she couldn't continue competing and Skinner would have to step in.

Biles was struggling with what gymnasts call the "twisties," a sudden inability to control their body while flying through the air. Skinner said she's had them once but was able to rebound quickly. She knows other gymnasts who've taken weeks to recover. Biles was deciding day by day if she felt up to competing in any competitions.

Skinner said it was a struggle to get her mind back in the game; after qualifying she'd resigned herself to going home and moving on. But she rallied, with the support of Biles and the rest of the team, she said.

Biles decided Saturday she would not compete the next day.

Skinner posted the news on Twitter: "Looks like I get to put a competition leo on just one more time. Doing this for us, Simone Biles. It's go time baby."

Credit: AP
From left, Mykayla Skinner of the United States, Rebeca Andrade of Brazil and Yeo Seo-jeong of South Korea, pose with their medals for the vault during the artistic gymnastics women's apparatus final at the 2020 Summer Olympics, Sunday, Aug. 1, 2021, in Tokyo, Japan. (AP Photo/Natacha Pisarenko)

Skinner's road to the Olympics was not a straight line, nor was it easy.

She was an alternate on the 2016 Olympic team that won gold in Rio de Janeiro — a frustration for her because at qualifying she racked up the fourth-highest score.

She retired from elite gymnastics after that and focused on her collegiate career at the University of Utah. Competing in college made her fall in love with the sport again, she said, and so in 2019 she chose to return, driven by an intense desire to make the Olympic team for Tokyo.

COVID-19 delayed her training. She caught the virus and was hospitalized in January. She missed about a month at the gym, and wasn't sure she would ever make it back.

But she did, marking an unprecedented comeback at 24 years old, an age considered ancient in this sport dominated by teenagers.

"I think it's so cool to show that age is just a number, and that anything is possible if you work hard and dream for it," said Skinner, adding she hoped young gymnasts entering the sport are inspired by her endurance.

The only person to score higher on Sunday was Rebeca Andrade of Brazil, who took home gold. As Skinner stood on the podium she saved her biggest wave for when she turned to her teammates in the stands. Biles and the others danced and screamed.

"It's so weird, I'm not used to seeing her in the stands," Skinner said.

She said Biles has been generous throughout the ordeal. She's calm and upbeat — laughing and giggling with them all day — and encouraging her teammates to give it their all.

"She is definitely one strong cookie," Skinner said. "She has inspired me in so many ways."

She worries that once they all get home, the situation might sink in, but she thinks Biles, who is also 24, will be just fine.

"In the end, there's more than just gymnastics. I know she's really looking forward to what's to come after this," said Skinner, who is also excited for her next chapter: "It's time for me to move on with life. I'm ready."

She's going to school for sports broadcasting. Now she dreams of starting a family.