No, shipping backlog at California ports is not caused by California trucking regulations

Increased volume moving through the ports has overwhelmed the supply chain across the board. 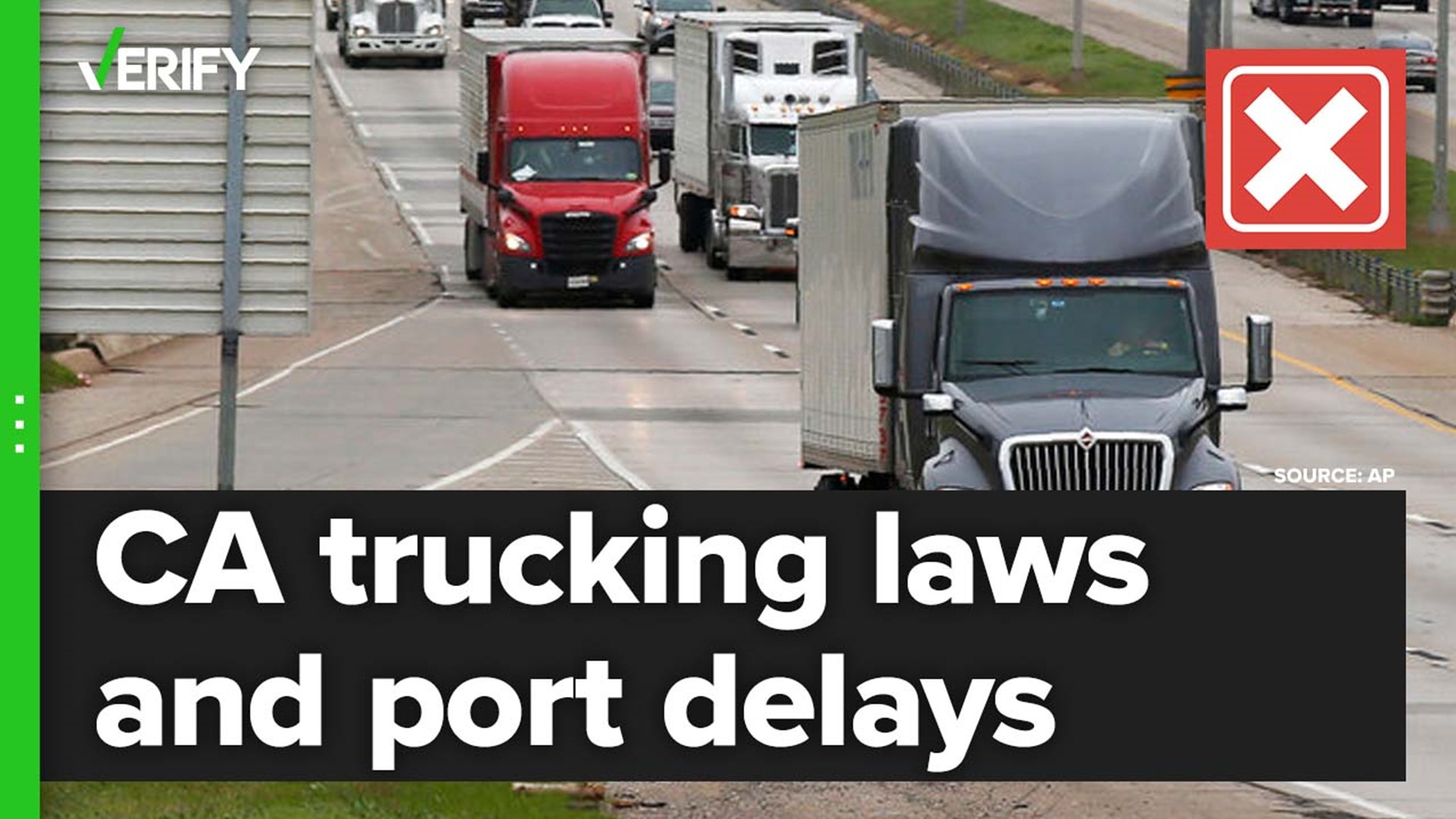 CORRECTION (10/28/21): An earlier version of this story said a person claimed in a viral post that California's regulations were the "primary cause" of the shipping backlog. The poster actually said the backlog was "in part" caused by the regulations. The story has been corrected to better reflect the claim in the post.

The supply chain is backed up, and that is leading to delays in goods ordered ahead of the holiday season.

The backlog is centered around California ports like the Port of Los Angeles and the Port of Long Beach, where container ships are waiting far longer than usual to dock.

A person claimed in a viral Facebook post that California regulations, namely a ban on older trucks and a law expected to restrict owner-operator truck drivers, share some of the blame for the shipping backlog. Several viewers asked if the claims in the post were real.

Are California trucking regulations contributing to the shipping backlog at California ports?

No. A number of different factors are contributing to the supply chain backlog, but they all come back to record volume moving through ports, not a truck shortage.

Two separate regulations are highlighted in these viral posts. The first is a California state law from 2019 called AB 5, which is designed to redefine the difference between independent contractors and employees within the state.

The other regulation is a California Air and Resource Board rule on the age of truck engines that has been in effect since 2010. CARB’s rule requires truck engines to be 2005 or newer as of this year. CARB says “it’s impossible that any shortage of vehicles at ports is the result of CARB regulations” because California ports have even stricter regulations. Since 2014, the ports have required trucks to use engines no older than from 2007 and those engines can remain in use until 2023.

CARB says 96% of trucks serving the Port of Los Angeles and the Port of Long Beach are already compliant beyond 2023, so very few port trucks need to be replaced anytime soon.

The Teamsters Port Division, a subdivision of the Teamsters Union and a supporter of AB 5, pointed to a lack of space and equipment as the primary issue at the ports. It pointed to data from the Port of Los Angeles showing that more than 5,000 trucks at the port, all of which meet the ports’ engine standards, aren’t in use.

The American Trucking Association says there has been a nationwide truck driver shortage since before the pandemic, which multiple parties working at the Southern California ports have referenced as one of many factors contributing to the supply chain’s issues.

But no one involved, even trucking groups who oppose AB 5, have pointed to the two regulations as the primary cause of the backlog — or even referenced a California-specific truck driver shortage as part of the problem.

Both the Port of Los Angeles and the Port of Long Beach, which handle a combined 40% of the containers that enter the U.S. in an average year, are reporting record container volume being processed through their ports.

A spokesperson for the Port of Los Angeles said there is limited warehouse capacity to store the containers because of a lack of available space and a shortage of warehouse workers. And because there is no place to take the containers, much of the equipment used to process the containers are being used as storage for empty containers.

“It’s not necessarily a shortage of drivers, it’s a shortage of equipment and then lack of productivity,” Matt Schrap, CEO of the Harbor Trucking Association, which represents truck drivers operating at west coast ports, said of the biggest issues they’re facing locally in Los Angeles and Long Beach.

The Owner-Operator Independent Driver Association said in a press release that various supply and staffing shortages in other industries have created a domino effect that has, in turn, forced many truck drivers off the road nationwide. “But let’s be clear, the current supply chain crisis is not due to a shortage of truck drivers,” the OOIDA said in the press release. “Because the real bottlenecks in the supply chain occur at pickup and delivery points, adding more trucks and drivers will simply make the lines longer, NOT faster.”

That’s because “the supply chain is a system of systems,” Schrap said. “The shortage of available drivers outside of the local harbor complex does have an impact on the ability for warehouses and what not to move their goods from their facilities, but it's not a function of a driver shortage down here in the ports itself. There are 14,000 drivers that are doing business here daily, or available to do business here daily.”

John Butler, president and CEO of the World Shipping Council, said in Congressional testimony that there is currently a “container movement problem.” He listed a number of factors contributing to this, but it all came back to record demand.

“Because the volume surge has affected every part of the supply chain, however, there is no single set of actors – ocean carriers, rail carriers, truckers, marine terminals, or cargo owner warehouses and distribution centers – that can clear the bottlenecks singlehandedly,” Butler said. “The congestion has occurred because all parts of the system are overwhelmed, and the congestion will clear when all parts of the chain return to normal.”

More from VERIFY: No, countries that observe daylight saving time don’t all change their clocks at the same time

Yes, you’re probably paying more for a turkey this year than two years ago