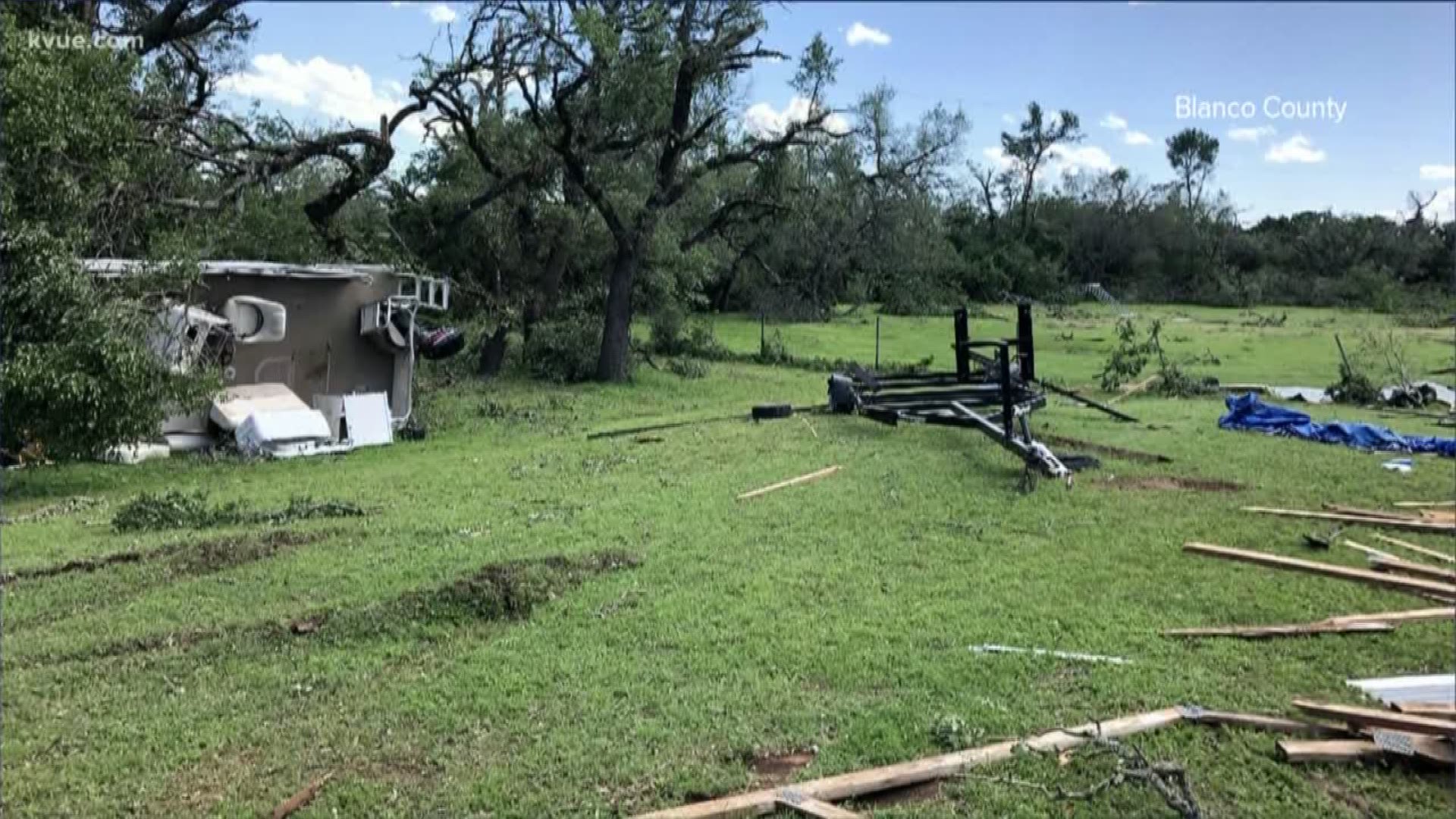 AUSTIN, Texas — A Tornado Watch was issued for most of Central Texas until 8 a.m. April 12. Storms until 8 a.m. were potentially capable of tornadoes, large hail up to tennis ball size and damaging wind gusts up to 70 mph.

Sunday morning, the National Weather Service (NWS) confirmed a tornado in northern Blanco County near Round Mountain, Texas. The tornado touched down around 5:30 a.m. On Monday, NWS confirmed the tornado was an EF-1.

NWS said the damage in that area includes downed and/or uprooted trees and some damage to RVs at the Hofbrau RV Park. Around 60 residences were impacted, with at least 11 completely destroyed and eight more sustaining major damage. At least 15 people are displaced, the county said. Damage is estimated at $1 million.

According to the county, first responders rescued several people who were trapped. Two people were injured and treated on scene by EMS before being released.

NWS also reported damage in Gillespie County near Willow City, Texas. NWS confirmed by Monday that an EF-1 tornado touched down there at 4:55 a.m.

NWS is unable to send field crews to survey damage in person currently due to social distancing. Instead, the organization is relying on local officials to send photos so they can survey the damage virtually.

6:30 p.m.: Blanco, Burnet and Llano counties have been trimmed out of the Tornado Watch.

5:50 a.m.: A Severe Thunderstorm Warning has been issued for Burnet County (Bertram area) until 6:30 a.m.

5:45 a.m.: A Tornado Warning has been issued for Burnet, Travis and Williamson County until 6:15 a.m.

4:42 a.m.: A Tornado Warning has been issued for Blanco, Gillespie and Llano counties until 5:15 a.m.

4:40 a.m. The Severe Thunderstorm Warning is extended for Burnet and Llano County until 5:45 a.m.

3:45 a.m.: A Severe Thunderstorm Warning has been issued for parts of Blanco, Gillespie, Kendall and Kerr counties until 4:30 a.m. 60 mph winds and quarter-size hail possible.

3:10 a.m.: A Severe Thunderstorm Warning has been issued for parts of Gillespie County until 3:45 a.m. Storm capable of hail up to a half-dollar size and 60 mph wind gusts.

2 a.m.: A Tornado Watch for much of the greater Austin area is in effect until 4 a.m.

After a few showers and downpours on Saturday afternoon, the severe weather potential is now expected to ramp up across Central Texas Saturday night.

The Storm Prediction Center (SPC) has outlined the enhanced level – 3 out of 5 – risk for severe storms for all of Central Texas. The main window for severe storms will come between midnight and 8 a.m. on Sunday morning.

Storms during this time frame may be capable of damaging wind gusts, large hail and isolated tornadoes.

The SPC has highlighted areas south and west of the Interstate Highway 35 corridor for an enhanced tornado risk on Saturday night.

In the yellow hatched area seen below, a strong, long-track tornado is possible.

The window for severe storms will open up at midnight, with storms first developing across the Hill Country.

Storms will push eastward through the late overnight, and it looks like storms may first move into Travis County and I-35 corridor by about 3 a.m.

Any of these embedded thunderstorms may be capable of damaging winds, large hail and a few tornadoes. Again, the highest tornado risk will be south and west of the I-35 corridor, where a strong, long-track tornado cannot be ruled out.

Although the tornado risk is a bit lower east of I-35, the severe weather risk will continue as storms push east of Austin by 7 a.m. on Sunday morning.

Storms will move out of Central Texas by about 8 a.m. on Sunday morning.

After sunrise on Easter Sunday, a much quieter weather pattern moves in with a strong westerly wind for the afternoon.

Clearing will take place through the day with sunshine for the afternoon and highs in the low 80s.

Expect cooler temperatures and drier weather for the upcoming week. The extended forecast can be found below.

For the latest weather alerts sent straight to your phone, be sure to download the KVUE app. 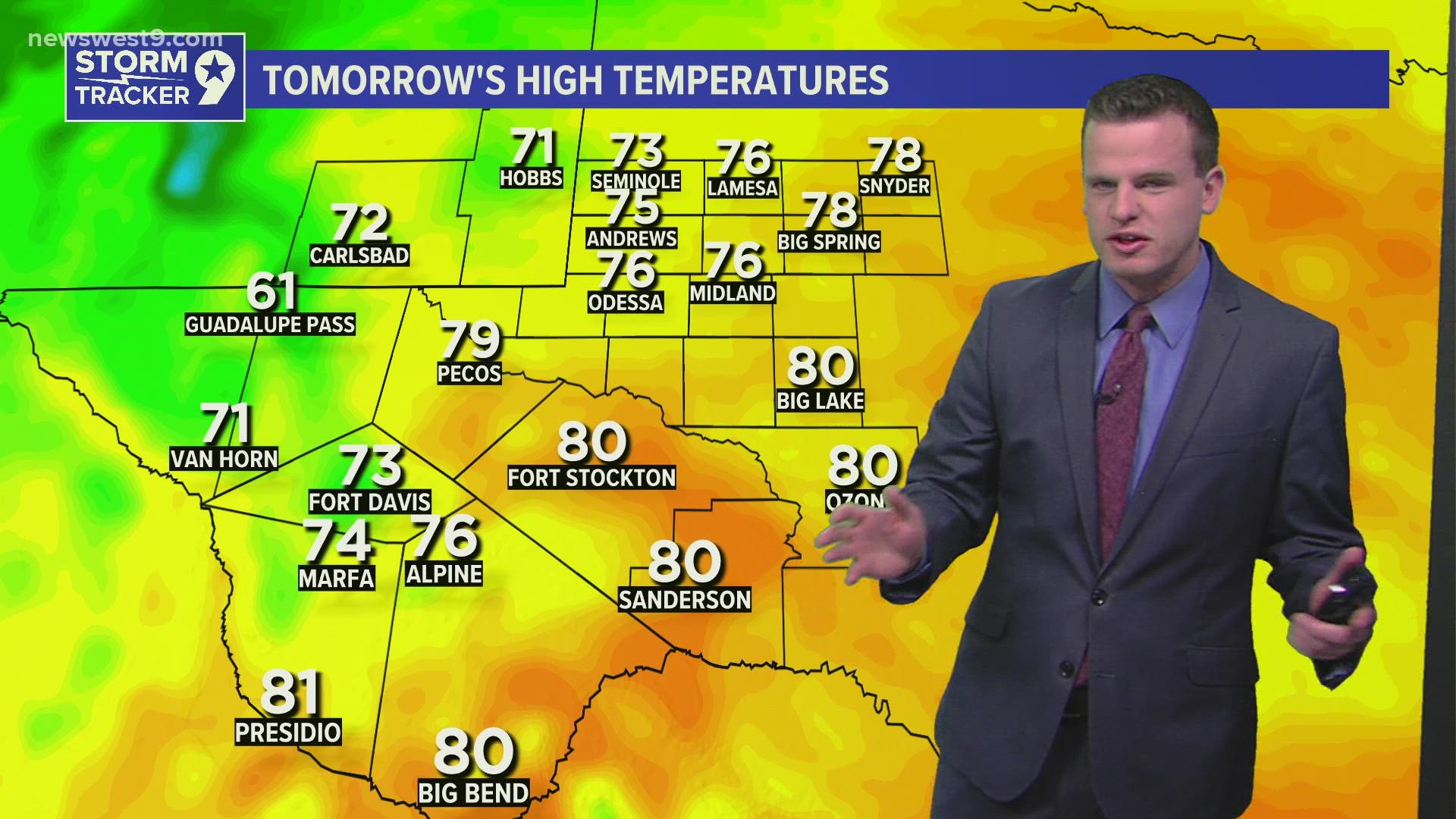