Douglas is brushing the Hawaiian Islands as a Category 1 hurricane. 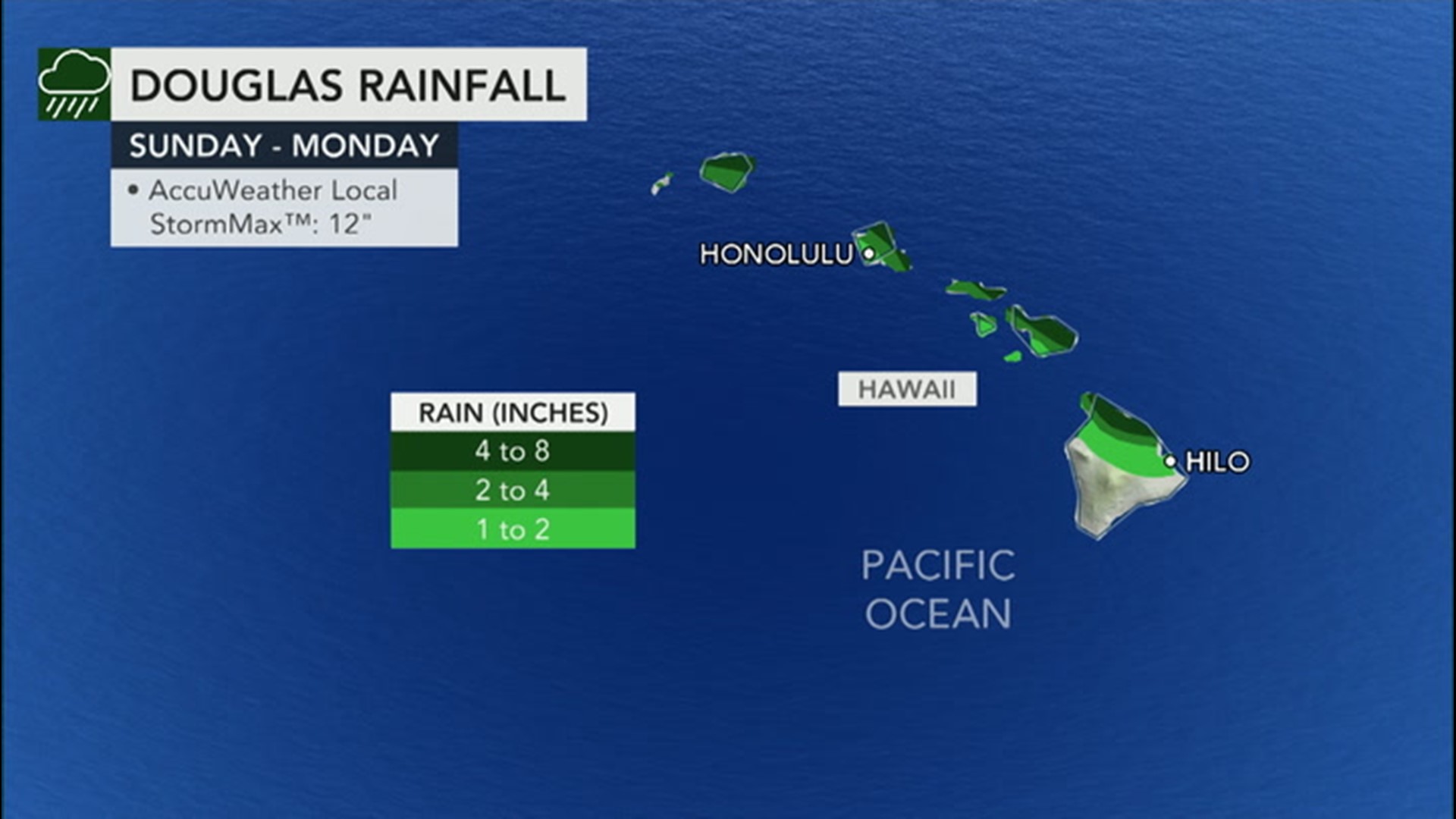 Douglas is brushing the Hawaiian Islands as a Category 1 hurricane with maximum-sustained winds of 90 mph.

After peaking as a Category 4 hurricane last week, the update from the National Hurricane Center at 11 p.m. Sunday, Hawaii time, shows Douglas was a Category 1 hurricane with maximum-sustained winds of 90 mph. Douglas is moving west-northwest at 16 mph and was located about 50 miles northeast of Lihue and 100 miles northwest of the state capital of Honolulu.

Into Monday morning, local time, Douglas will continue to pass just to the north of the Hawaiian archipelago and is forecast to remain a Category 1 hurricane during that time. Still, Douglas will have to battle through an area of moderate-to-high wind shear and cooler ocean water to maintain its hurricane status.

Later on Monday, Douglas is forecast to be downgraded to a tropical storm.

Ahead of Douglas, Hawaii Gov. David Ige issued a state of emergency declaration on Thursday.

"Our top priority is always the safety, health and well-being of our residents and visitors. Please take immediate steps to protect your families, loved ones, employees and property," Ige said in a news release.

Additionally, officials in Maui County warned residents that they should prepare to shelter in place.

"We have limited shelter space due to COVID-19 guidelines, so we are urging the public to make preparations now to possibly shelter in place at your home, or a family or friend's home," Maui Emergency Management Agency administrator Herman Andaya told Hawaii News Now.

According to Hawaii News Now, officials are looking at opening emergency shelters, but due to the coronavirus pandemic, some residents may have to shelter in place at home due to a reduced capacity at shelters.

In addition, Hawaiian Airlines announced the cancellation of a handful of flights scheduled for Saturday, July 25, due to the hurricane, as well as all transpacific and inter-island flights on Sunday, July 26. They have also issued a travel waiver for all flights in and out of the islands from July 24 to 28.

Douglas is not expected to make landfall in Hawaii, with the center of the storm going just north of Kauai.

Douglas is forecast to be less than one on the AccuWeather RealImpact™ Scale for Hurricanes.

Locally heavy rainfall will accompany the hurricane's close pass by the islands, especially on the northern shores.

An AccuWeather Local StormMax™ of 8 inches of rainfall is possible, especially in the highest elevations.

Wind gusts of 40-60 mph are anticipated across northern Oahu and northern Kauai through Monday.

AccuWeather Senior Meteorologist Alan Reppert warns that there will be a period of time where stronger winds come out of the south as the storm departs.

"This wind direction is not typical for the islands which usually see a more easterly or northeasterly wind direction. As such, the winds associated with Douglas could cause more damage than you would initially expect at these speeds," said Reppert.

Winds will gradually dissipate into Tuesday as the storm loses wind strength and moves away to the west.

After spending some time as a Category 4 hurricane Thursday night, Hurricane Douglas began to lose wind strength on Friday. At peak intensity, the storm churned through the Pacific with winds of 130 mph.

Douglas remained a major hurricane (Category 3 strength or higher) through most of the day on Friday. Over the weekend however, Douglas began moving into a much harsher environment for tropical systems to thrive, which has caused the storm to loose additional wind strength.

Despite sitting in the middle of the Pacific, Hawaii doesn't get struck by many powerful hurricanes.

Hurricane Lane came dangerously close in 2018, but didn't make landfall. It did, however, unleash record-breaking rainfall.

Arguably the most devastating storm in Hawaii's recorded history was Iniki in September 1992, when it caused billions of dollars in damage. Winds were recorded at 145 mph, and over 1,420 houses were destroyed.

Hurricane Olivia in September 2018 was the last tropical system to bring direct impacts to the islands. The storm made landfall on Maui and Lanai as a tropical storm, which was the first landfall on these islands in recorded history.