Like other airports across the country, Austin's airport has seen a low number of flyers during the coronavirus pandemic. 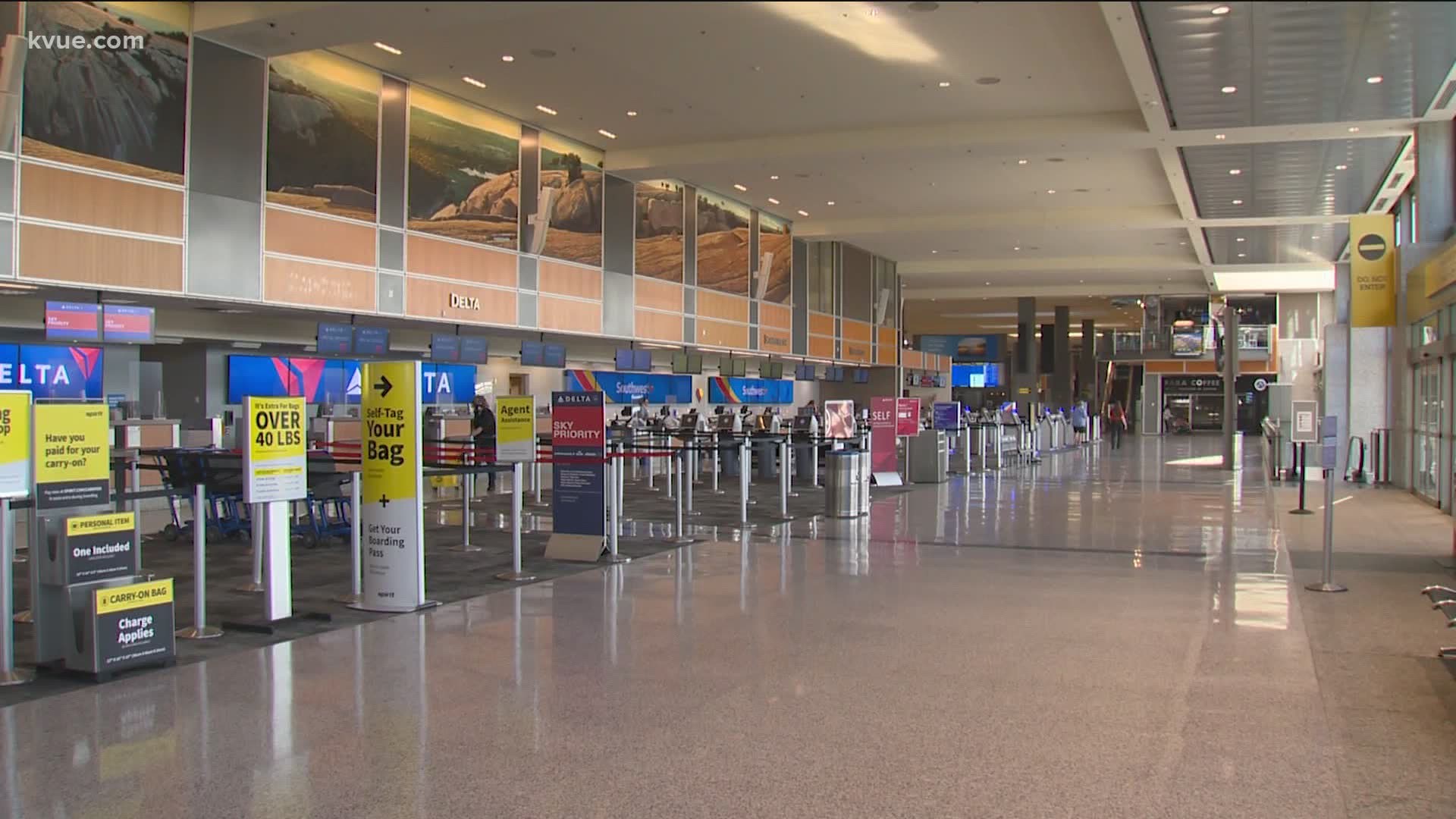 AUSTIN, Texas — A plan that would double the size of Austin’s airport will be delayed because of the coronavirus pandemic, but it’s too soon to say how long it could be pushed back.

Austin-Bergstrom International Airport (AUS) saw a dramatic decline in passengers in March and April, with a reported 52% drop in flyers for March 2020 compared to March 2019. April numbers are expected to be even worse.

“It's really too soon to project exactly any hard timelines for how much things will shift one way or another and part of that is also because of how quickly we rebound on passenger demand. It's probably going to take several years to get back up to the numbers that we were seeing heading into 2020,” said Bryce Dubee, airport spokesperson. “There really has been an industry-wide impact from the COVID-19 pandemic.”

Credit: Austin-Bergstrom International Airport
The white buildings in this rendering are current construction. The new construction, including the new terminal, is highlighted in orange.

In 2019, AUS was considered the second-fastest-growing mid-size airport in America with more than 17.3 million flyers.

The City of Austin projects a $68.1 million budget shortfall for the airport this year, with less landing, parking and concession revenue.

“One thing that makes airports unique is while we are owned and operated by the City of Austin, our revenue stream is independent. So we're not funded through taxpayer dollars,” Dubee said.

RELATED: Tomorrow’s ATX: What Austin-Bergstrom International Airport will look like in 2040

Passenger numbers are slowly starting to increase again, with more than 12,000 people flying out of AUS in the last week – anywhere from 1,600 to 2,200 on a given day.

“We've really moved forward with some of the plans to welcome back passengers to the airport,” Dubee said.

Memorial Day Weekend is also expected to bring the highest number of flyers to the airport in months.

For the first time in two months, Southwest Airlines – Austin’s busiest carrier in 2019 –  more people are booking flights than canceling them, according to the airline’s latest filing with the U.S. Securities and Exchange Commission.

The airline is also requiring face coverings on board and is blocking a third of seats on planes to keep distance between flyers.

United Airlines is alerting passengers when a flight sells more than 70% of its seats so they can take a different flight if they choose to.

The state of Texas still has a mandatory 14-day self-quarantine for any travelers arriving from Washington, California, New York, New Jersey, or Connecticut, as well as the cities of Chicago, Detroit, Atlanta and Miami.

The Governor’s Office tells KVUE these restrictions could be lifted “soon.”

WATCH: Boomtown 2040: The future of growth at Austin's airport

University of Texas will open in the fall, UT President Fenves says