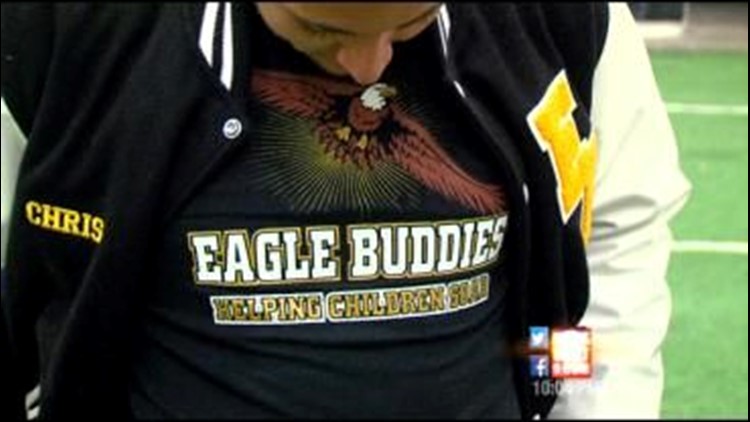 One act of kindness can change a life and start a never-ending chain of people making a different. That's what happened when Hobbs Eagle football player, Chris Kuykendall, reached out to a five-year-old being bullied at school.
Author:
Published: 3:19 AM CST December 11, 2014
Updated: 1:55 PM CDT July 2, 2018
by Kim PowellNewsWest 9

HOBBS, NM - One act of kindness can change a life and start a never-ending chain of people making a different. That's what happened when Hobbs Eagle football player, Chris Kuykendall, reached out to a five-year-old being bullied at school. Then his teammate joined in, as well as the rest of the football players and other athletes.

"We were having lunch with some kids and we go on to be on the Meredith Vieira Show. That was crazy," Brevin Young, co-founder of the Eagles Buddies, said.

After our story aired in October, the Meredith Vieira Show flew them to New York and their impact on others grew even more.

"They really supported it a lot so I think they were really on board with it and I've had numerous amount of people from different states call and text me about how they can get this started in their school, so it's definitely been a pretty good experience," Kuykendall said.

"I mean, we've grown so much. We've gotten so much recognition and that's what we wanted, a platform which all thanks to you guys, NewsWest 9, for doing this and making it aware to everyone," Legina Gonzales, Brevin's mother, said.

Not only were they interviewed by Meredith Vieira, but they were also given customized letterman jackets and $5,000 from Quiznos so they can continue having lunch with bullied kids.

A 5th grade spelling bee champion even got to take the trip with them after he was having a hard time at school.

"I was getting bullied at school one day and I was crying in the office and they came in and I told them what's the matter," Ryan Chamberlain said.

But all it takes is just that--someone to talk to, to eat lunch with, and to just be a friend.

"It's just nice to know that you can talk to somebody and that they'll stop the bullying," Chamberlain said.

"It's really easy to just make a friend and be kind," Tracy Kuykendall said.