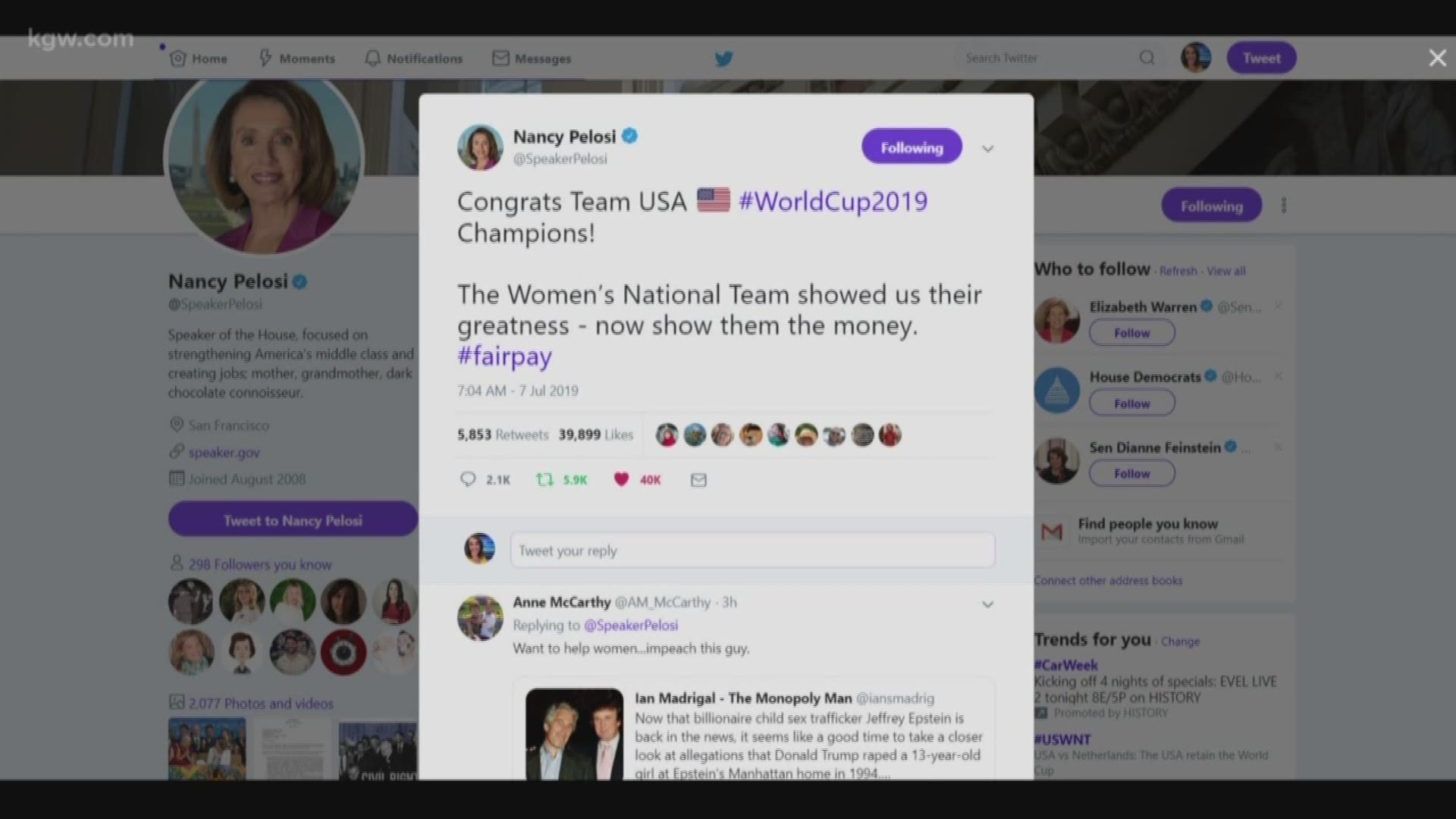 Minutes after the U.S. women's national soccer team beat the Netherlands 2-0 for its record fourth World Cup title (and second in a row), many fans inside France's Stade de Lyon delivered an unequivocal message, breaking into an impassioned chant of "Equal pay! Equal pay!"

The women's team sued the U.S. Soccer Federation in March claiming gender discrimination. The sides have agreed to mediate the lawsuit.

U.S. soccer star Megan Rapinoe, who played at the University of Portland and lives in Seattle, won the Golden Ball as top player and the Golden Boot as top socrer. On Saturday, on the eve of the title match, she called out FIFA during a news conference.

Rapinoe suggested soccer's governing body was not doing enough to grow the women's game, pointing to unequal prize money and the scheduling of the final on the same day as the championships of the CONCACAF Gold Cup in Chicago and the Copa America final in Brazil.

On Friday, Infantino announced he'll seek to double the prize money for women at their next World Cup in 2023. Rapinoe said that's not enough.

“If you really care, are you letting the gap grow? Are you scheduling three finals on the same day? No, you’re not. Are you letting federations have their teams play two games in the four years between each tournament? No, you’re not,” Rapinoe said. “That’s what I mean about the level of care, you need attention and detail and the best minds that we have in the women’s game, helping it grow every single day.”

When asked what the women's game needs to grow globally, Rapinoe said money is the most important factor.

"Money, Money, Money, Money. Money from FIFA, money from federations. Money from advertisers, sponsors, rights-holders, TV. All of that," Rapinoe said. "And obviously not just blindly throwing cash at things, but investing in infrastructure, in training programs and academies for women, in coaching for women. All of it. I don’t think you get to the point of having an incredible business by running it on a budget that’s a dollar more than it was last year. You have to make up-front investments and really bet on the future."

On Sunday, Rapinoe said winning the World Cup was about much more than just soccer.

Speaking on France Info radio before the Women's World Cup final in Lyon, Macron said "we need to go progressively toward that."

U.S. President Donald Trump, who has sparred with Rapinoe on social media the past few weeks, tweeted only congratulations after Sunday's win.

Jared Cowley writes about the Trail Blazers and other topics for KGW.com. He's also the co-host of the 3-on-3 Blazers podcast (listen here). You can reach him on Twitter @jaredcowley.