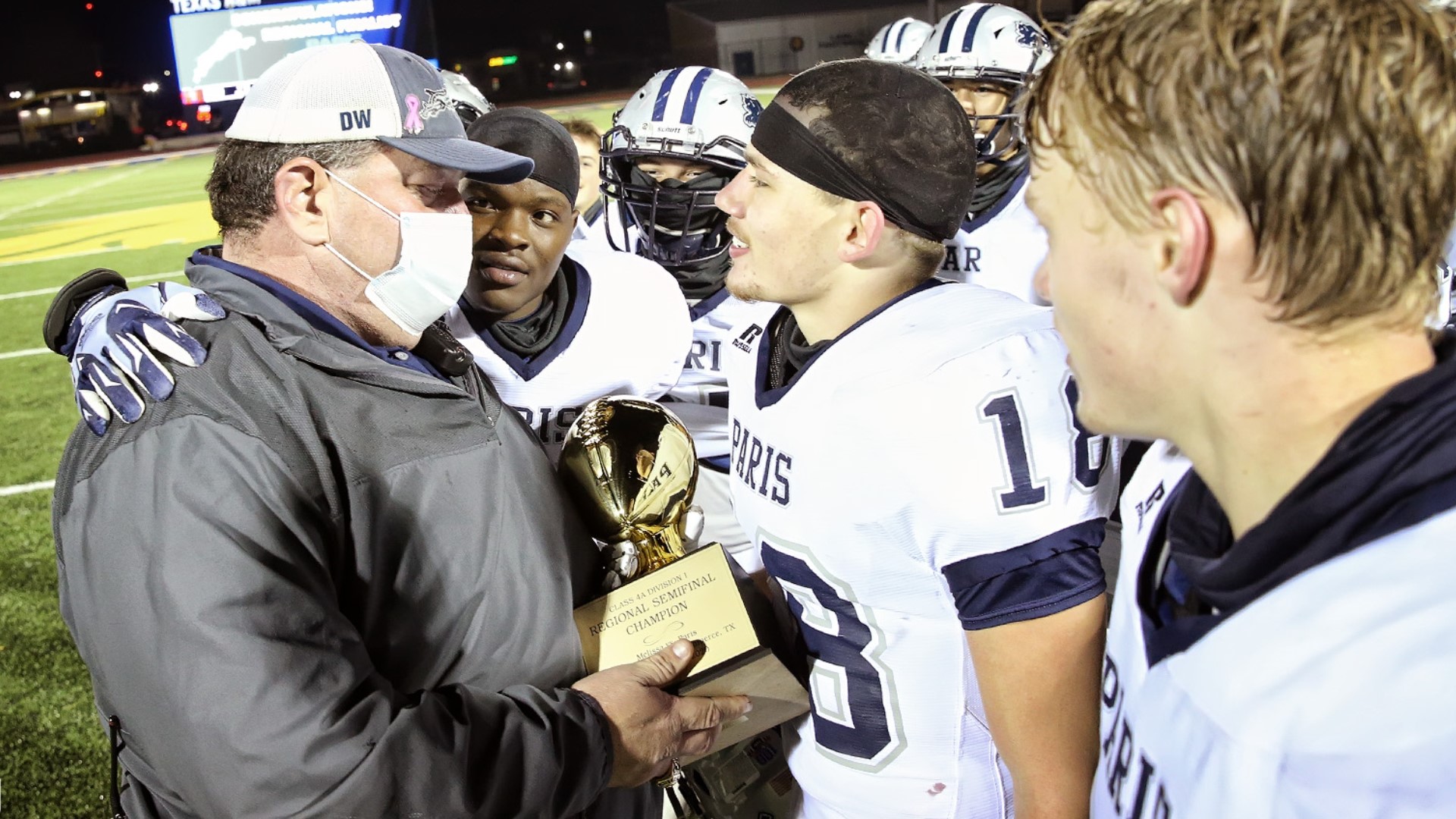 PARIS, Texas — Paris, Texas is a town of 26,000 people and you'd be hard-pressed to find someone who knows more of them than Chad Helberg.

"It's hard to be a stranger in Paris," Helberg said. "Just because everyone knows each other."

Funny thing is: Helberg's originally from down the road in Clarksville.

"I'm the biggest cheerleader on the sideline, until somebody gets hurt and I have to go to work," said Helberg.

In 1995, Helberg became the first athletic trainer in the history of Paris High School. He still holds the title to this day, along with the role of assistant athletic director.

"Our kids know, without a doubt, that [Chad] loves them and he cares for them," noted Paris Head Football Coach Steven Hohenberger.

However, the Wildcats season hasn't been without adversity.

In September, one member of the varsity football team tested positive for COVID-19, causing the entire team to quarantine and forfeit their first two district games.

Loss has shadowed Helberg throughout 2020.

On Aug. 7, Helberg's step mother, Jane, died in a nearby hospital after a series of health problems.

Sadly, her family -- including Helberg's father -- was unable to be by her side because of the hospital's COVID-19 safety protocols.

"[My dad] said he'd never let another family member ever be alone again in the hospital," Helberg recalled, wiping a tear from his eye.

Helberg's father, Allan, served in the United States Army during the Vietnam War. He was a fighter in every sense of the word.

In the fall, Allan tested positive for coronavirus and soon came down with pneumonia.

Following through on his assertion to not go to the hospital alone, Allan remained at home in Paris.

He eventually tested negative for COVID-19, but his health had already deteriorated.

Three weeks later, Allan Helberg died on Thanksgiving Day with his son, Chad Helberg, by his side.

"I put my hand on his chest and said, 'Dad, we're good. Love ya. We're at peace,' He took four more breaths and that was it," Chad Helberg detailed.

The night after his father's death, he was on the sideline for Paris' regional semifinal game.

"That football team is my family too and that's where he'd want me to be," he said. "He'd probably beat the snot out of me, if I hadn't been there."

During the national anthem, there's a photo of Chad staring at the American flag and thinking about his late father.

"He loved the country," Helberg fought through tears. "He loved fighting for this country."

The Wildcats fought their way to victory and kept their season alive.

After the whistle blew and the regional semifinal trophy was handed to the players, the Wildcats ran over to Helberg and gave it to their teary-eyed trainer.

"That meant a lot," Helberg said. "It shows their character. We've got great kids."

"We just told him how much we love and we appreciate him and how we wouldn't be here without him," said Atwood.