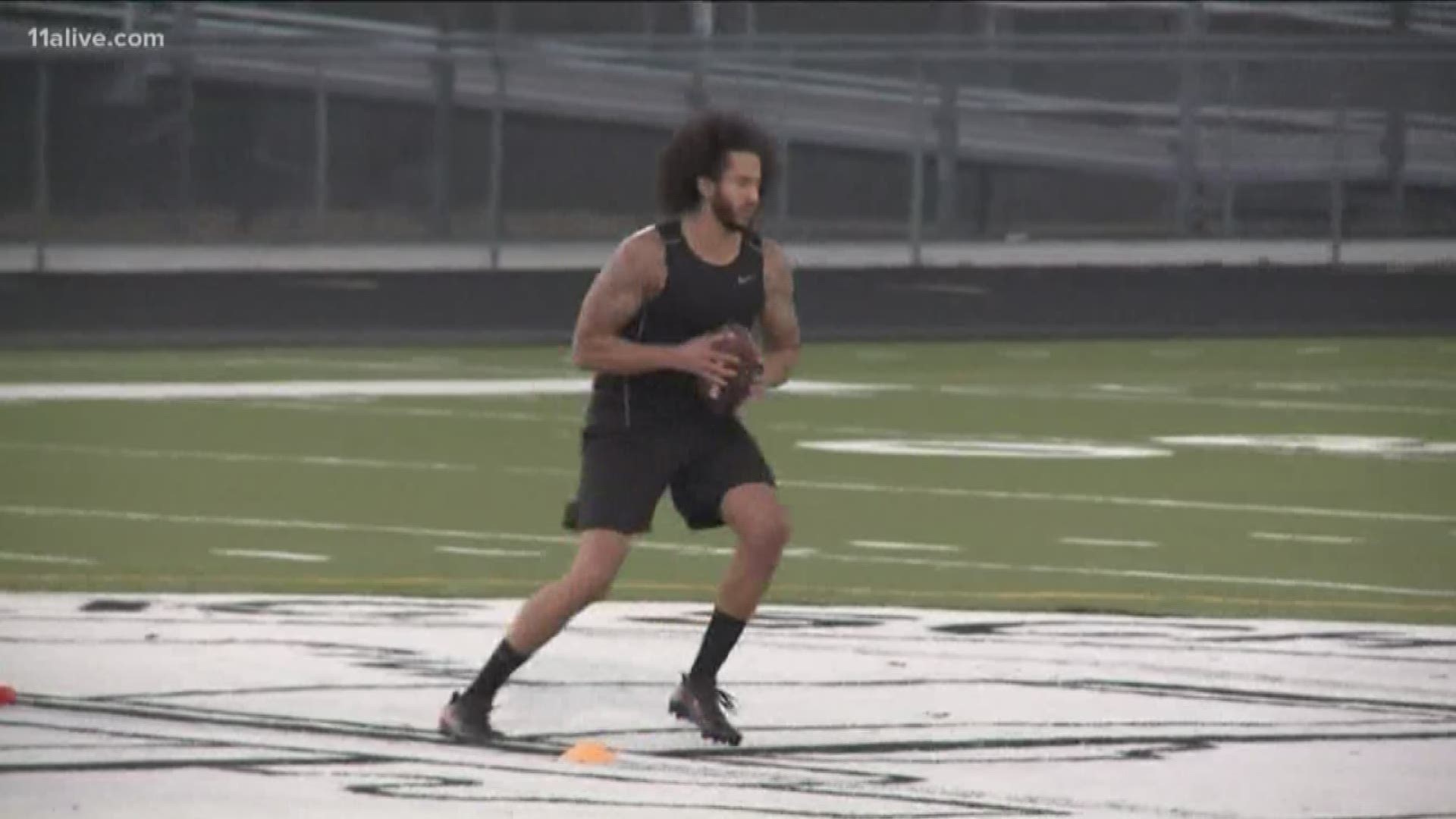 ATLANTA — After three years away from the NFL, 32-year-old Colin Kaepernick got a workout in front of League scouts on Saturday afternoon.

Kaepernick last played for the San Francisco 49ers that season, when they finished 2-14. During that season, Kaepernick silently demonstrated police brutality against people of color by kneeling during the playing of the national anthem prior to the start of the game.

His protests drew the ire not only of fans, but of then-presidential candidate Donald Trump.

Representatives from all 32 NFL teams were invited to a private workout, which was originally set to begin at 3 p.m. However, the workout was moved to Charles Drew High School in Riverdale, Georgia, at about 4 p.m.

Originally the workout was going to be a private affair but was opened to the media at the new location.

Several sports news outlets indicated that most, if not all, of the League's teams would send someone to view the workout.

On Saturday, ahead of the scheduled workout, protesters both for and against Kaepernick, were camped out along the roadside outside the Atlanta Falcons headquarters in Flowery Branch.

Signs with slogans like "We're with Kap" could be seen on one side, while other signs saying things like "Stand up for the flag," were visible on the opposite side.

The numbers of protesters and supporters were expected to grow on both sides over the course of the afternoon.

Photos: Colin Kaepernick gets his shot at the NFL

Initially, reports suggested an agreement between Kaepernick's camp and the NFL finally came together on Tuesday afternoon. The New York Times said Kaepernick's team was told of the plans and given two hours to confirm whether or not he would attend the session.

Kaepernick said he has been working out daily for the past three years and was ready to see league representatives on Saturday - though the location change could impact at least some of that.

In Februrary, Kaepernick settled a grievance he had filed against the NFL accusing teams of colluding to prevent him from playing in the League because of his protests during the 2016 season.

A month prior to the start of the 2019 regular season, Kaepernick tweeted a video showing his daily workout regimen with the text: "5am. 5 days a week. For 3 years. Still Ready."

The original plan for the workout at Flowery Branch would have been similar to a pro day, with drills, measurements and an interview, which would have all been filmed and made available to management from each team in the NFL.

Saturday's workout for Kaepernick came at a time when marquee starting quarterbacks in the NFL have been forced to sit out for a number of weeks due to injury, including Atlanta's Matt Ryan, Pittsburgh's Ben Roethlisberger, New Orleans' Drew Brees, and Carolina's Cam Newton.

In addition, Indianapolis quarterback Andrew Luck abruptly retired just before the start of the 2019 season which left a big hole in the Colts offense.