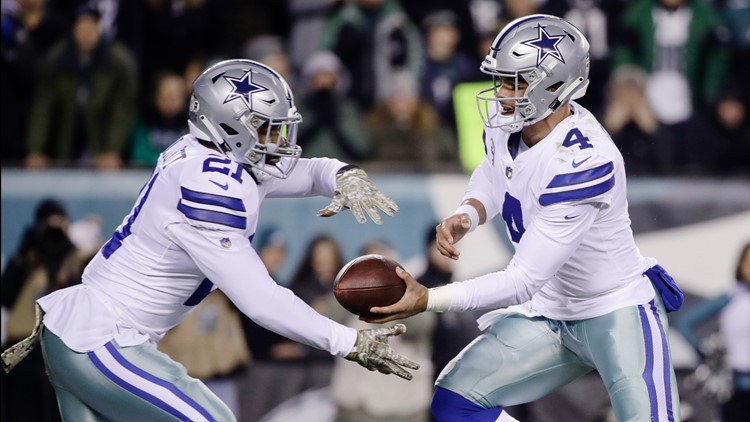 Photo by: AP
FILE - In this Nov. 11, 2018, file photo, Dallas Cowboys quarterback Dak Prescott (4) hands off the ball to running back Ezekiel Elliott (21) during the team's NFL football game against the Philadelphia Eagles in Philadelphia. The Cowboys face the New Orleans Saints on Thursday night in Arlington, Texas. (AP Photo/Matt Rourke, File)

DALLAS — The NFL released the schedules for the upcoming 2019 season on April 17, including the full schedule for the Dallas Cowboys. One thing was noticeable immediately and not something uncommon. Stop me if you have heard this before: the Dallas Cowboys and New York Giants will open the season on September 8 at AT&T Stadium.

That's right. It'll be Eli vs. Dak once again to begin the 2019 season. Only this time, the Cowboys and Giants won’t be playing in prime time but will be the late game on opening weekend.

RELATED: Use 'Cowboys' in a password? You probably shouldn't

This year, the Cowboys won’t be playing in any stadiums west of the Dallas-Ft Worth metroplex. This marks the first time since 2015 that this has occurred. Dallas will be hoping that the results of that anomaly from before isn’t repeated as the Cowboys went 4-12 and finished with a top four overall selection in the NFL Draft.

Sure, the top pick brought Dallas Ezekiel Elliott but that was a painful season that saw Tony Romo break his collarbone twice and the team finish 1-11 in games started by any other quarterback not named Tony. Being able to avoid those west coast start times is nice but not if it means another disaster like the 2015 season.

The Cowboys and Packers will once again renew their long-standing rivalry with their 37th overall meeting, and 29th standoff in the regular season, with a showdown in early October. The Packers won the last two games against the Cowboys which has given them a 19 to 17 edge in the all-time standings currently.

The game at AT&T Stadium will also mark the first time that Green Bay will have to game plan against their former wide receiver Randall Cobb who signed with Dallas during the offseason. As has historically been the case, this game could have huge playoff implications once the season is all said and done.

The Cowboys will also get to see how they stack up against the defending world champion New England Patriots come November 24 on a Sunday afternoon in Foxboro. This will be an opportunity for this coaching staff to see where they stand against the perennial Super Bowl contenders.

Following that late game on the east coast, the Cowboys will come home for their annual Thanksgiving game. This time it will be Dallas facing off against a former wide receiver as Cole Beasley and the Buffalo Bills come to Arlington just time for turkey.

It will be a bittersweet homecoming of sorts with the former SMU Mustang playing in his first home game standing on the other sideline. Beasley became a fan favorite and a security blanket for both Romo and current quarterback Dak Prescott.

The December stretch run will once again be an important one if the Cowboys want to make it back to the playoffs. Following their Thanksgiving game, the Cowboys will need to take on two of last year’s NFC contenders on back-to-back weeks including a trip up to Chicago and then a rematch against the defending NFC champion Los Angeles Rams who will be coming to town on December 15.

The 'boys will likely be chomping at the bit to avenge their loss in the divisional round to LA in February that ended their 2018 campaign prematurely. They won't be able to afford a let down after that one, though, as they will need to say ready to close things out in the NFC East. Dallas finishes the season with a game at Philadelphia and at home in the finale against Washington on December 29.

It's not an easy schedule for Dallas, as they play against six playoff teams from a year ago and don't have a single back-to-back homestand, but the Cowboys are putting together a team that they hope will be able to maneuver through the challenges now set ahead of them.

For the way too early schedule prediction, this season has all the makings of a 9-7 or 10-6 finish dependent upon what happens this weekend with the NFL Draft.

How do you see the Cowboys' season shaking out now that you've seen the tough road they'll have to navigate on their schedule? Share your predictions with Patrick on Twitter @DraftCowboys.