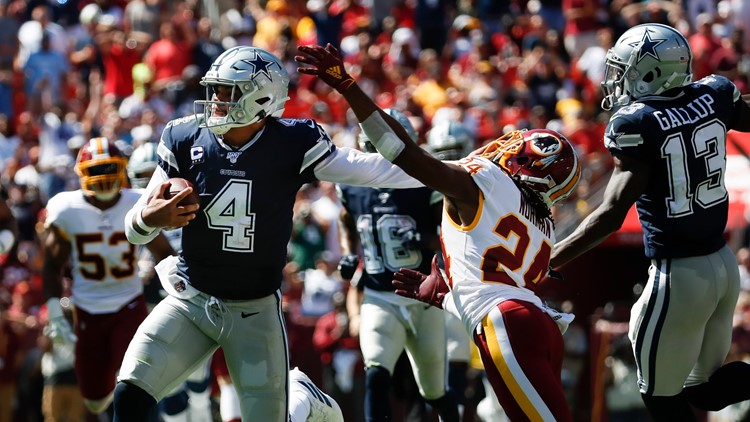 LANDOVER HILLS, Md. — If week one was about domination for the Cowboys offense, Sunday at FedEx Field was a study in resiliency.

Expecting another perfect passing performance from quarterback Dak Prescott would have been asking too much. But we should know by now, not to doubt his ability to bounce back.

"His head is always in the game,” said backfield mate Zeke Elliott of the Cowboys signal-caller. "No matter what’s going on he’s always on to the next play and seeing what he would do to be better on the next play."

Prescott led the charge on a game-changing second-quarter drive that covered 97 yards. He ripped off a nice run and completed four straight passes, including a perfect 51-yard scoring strike to Devin Smith. More than a touchdown, it was a game-changer.

"We were all on the sidelines saying we just need one play, one play. Dak made that play for us and after that, we just started clicking,” said receiver Michael Gallup.

More than a touchdown it was a game-changer. Driving the length of the field, snatching away momentum from Washington.

"It’s huge,” said offensive lineman Zack Martin. "It’s deflating to the defense and it allows our defense to get their wind back and get ready to go out on the field. So, it’s huge for our entire team.”

On their next drive, Prescott provided the Cowboys another spark. He kept the ball on a zone-read play and rambled for 42 yards. It was not pretty, by any means, but absolutely effective and it set up another score.

"I’m not the fastest, so I didn’t know what was coming up behind me,” said Prescott

Meanwhile, after happened, "I told him if he would have just kept running he might have scored,” said Elliott with a chuckle.

When he was told about Elliott's comment, Prescott had a little fun, too. "Yeah, I love my teammates.  they have all the belief in me,” Prescott said with a big smile. "I don’t know if my speed [has that same belief]."

On the day, Prescott completed 26 of 30 passes including three touchdowns, bringing his total of touchdown passes in the first two games of the season to seven. And he couldn’t have been in a better rhythm in the second half.

It turned out to be a perfect passing half for Prescott and in the process, he tied his own career mark with 18 straight completions, after going 14-for-14 in the second half.

And precisely what that Cowboys offense needs, even if Prescott wasn’t perfect the entire game.