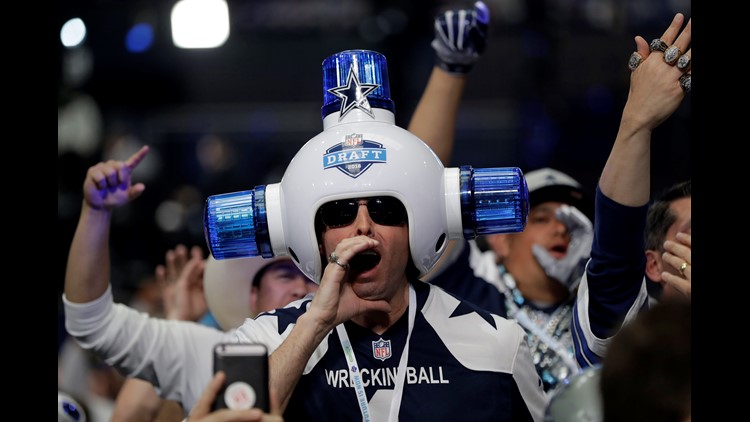 DALLAS — The Dallas Cowboys will be looking to add to their currently roster next week with the commencement of the annual NFL Draft. When looking into the recent history of their selections, noticeable trends show up in terms of the position groups and the region in which they played collegiate football.

The trends could be due to the areas where the development is better for that group or due to the team feeling more comfortable with a particular scout’s evaluation.

The information collected dates back to 2010, the first draft in which Jason Garrett was the full-time head coach.

The Dallas Cowboys have made their mark in this personnel group. The team really started rebuilding their offensive line in 2010 when they selected Tyron Smith. Interestingly, he is the outlier of the group as he is the only selection out of the West region.

Zack Martin and Travis Frederick are both from the Midwest region which has the largest percentage of draftees dating back to 2010. If the Cowboys decide to add to the offensive line in the upcoming draft, best bet would be in the South or Midwest if trends are followed.

The skill position group is made up of wide receivers, tight ends, fullbacks and running backs. While Ezekiel Elliott came from the Midwest, primarily it is a group dominated by players in the south, particularly from the Big 12 Conference.

Seven of the 12 players from the South played in the Big 12 which is represented by three schools (Oklahoma, Texas and Oklahoma State) who appear quite frequently on Dallas' draft board.

A player to be mindful of is Deebo Samuel of South Carolina as he plays in the South and could really help this team moving forward with the loss of Cole Beasley.

The defensive line numbers are really spit across the board with the slight edge to the Midwest with the recent selections of Taco Charlton, Randy Gregory and Malik Collins who all played in the Big Ten conference.

The West is dominated by Boise State alums Tyrone Crawford and DeMarcus Lawrence. No university has produced more Cowboys since 2010 than the Broncos.

Best bets for any defensive line help may come from the interior and you’ll be smart to bet on the Midwest or the West for another talented player in that position.

Essentially the linebacking group is all over the board with the exception of the Northeast, the Cowboys have made only one selection in that part of the country and it landed them Sean Lee.

Outside of Lee, when it comes to linebacker, Dallas deals a lot more with the Midwest and South regions. It doesn’t appear that the Cowboys will be looking at this group early on in the draft with the young duo of Leighton Vander Esch and Jaylon Smith, along with the return of Lee. This group seems to be one of the deepest on the roster at this point in time.

The Cowboys will likely be in the market for defensive back help, mainly at the safety position when they come to the podium on Friday night. The team’s most recent selection at that particular position came from the South with Xavier Woods as a sixth rounder out of Louisiana Tech.

The player who fits the trend is Juan Thornhill out of Virginia. He plays in the South and he would be a nice compliment to Woods. This group is well represented across the board even with the emphasis on the South, so don’t rule out the thought of Taylor Rapp out of Washington being the Cowboys' first selection.

The one group not part of this evaluation is the quarterbacks. Over the last decade plus, only two quarterbacks have been drafted and both hail from the South. The Cowboys likely go with their trio of Dak Prescott, Cooper Rush and Mike White in 2019.

Overall, since the beginning of the 2010 season, the Dallas Cowboys have stuck close to home by a wide margin, the South region has produced more Cowboys than any other during that span by a hefty margin and could inform how they plan to add to their team beginning next week.

NFL Draft festivities are set to begin in just a week. All 32 teams will get ready to add to their rookie classes with an event that will span seven rounds and 254 selections spanning three days that will take place in Nashville, Tennessee from April 25-27.

The Dallas Cowboys won’t have a pick announced until Friday when they select at No. 58 overall. That is unless Jerry Jones and the front office make a move to jump back into the first round. That wouldn’t be all that surprising for Jones who isn’t afraid to make a move on draft day.

For those who don’t want to travel to the Music City to partake in the festivities, the Cowboys will have their very own event. During the three days listed, the team will provide some entertainment at their headquarters in Frisco, Texas. The Star will have live music, autographs from current players, Car show and even a 7-on-7 State qualifier. This event is free for both admission and parking.

All the details can be found on the team’s website at DallasCowboys.com/Draftday. This is a great opportunity to meet the cheerleaders, rhythm dancers and many of your fellow fans. The NFL Draft itself will begin on Thursday April 25th at 7 pm central.

Do you think that the knowledge of how the Cowboys have drafted in the past informs how they may draft in the future? Share with Patrick with players you think Dallas might take based on this info on Twitter @DraftCowboys.