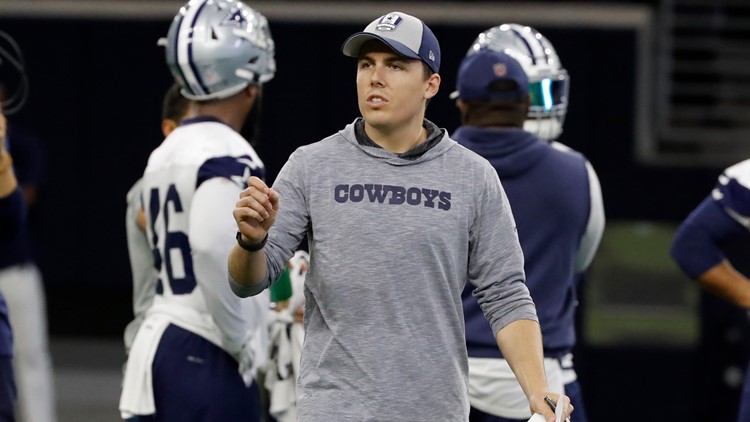 OXNARD, Calif. — His ascent has been so quick. Just three training camps ago Kellen Moore was a back up quarterback for the Cowboys.

Then onto quarterbacks coach and now offensive coordinator. The rise so meteoric, Jason Witten couldn’t believe his new coordinator’s age.

When asked if he thought he’d ever be seven years older than his offensive coordinator, Witten responded in disbelief, “He’s only 30!?"

Yep Jason, just 30. And now Moore is in charge of an offense trying to improve on a bottom-third showing a season ago. The Cowboys ranked 22nd it the NFL in terms of yardage and scoring.

The NFL’s a copy-cat league. Ram’s 30-something coach Sean McVay’s success paving the way for Moore to get his shot, which didn’t surprise Witten at all.

"You know when he was a backup quarterback here,” said Witten, "he acted like a coach, how he prepared, how he went about it.

Moore’s considered a bright offensive mind and time will tell on that front. But we know this - in his new position communication is vital and training camp is where he can build a strong foundation in that regard. Players and coaches can talk through new wrinkles installed into the offense. Moore must show a command on the field and in meeting rooms.

"Yeah, I think first and foremost, be yourself ,but also recognize rooms are different,” Moore said. "When there’s 40 guys in a room it’s a little different than when you’re in a room talking to quarterbacks and there’s six of us in there."

His father, Tom, is one of the most decorated high school head football coaches in Washington state history, so Kellen’s been around it, and is confident he can handle it; although don’t expect much yelling and screaming.

"I don’t think he’s necessarily a rip someone’s {butt} all the time guy,” said offensive lineman Zack Martin "but we’ve got plenty of guys who can do that.”

Moore's been around the game so long, he's more comfortable with a mild-mannered approach.

"Since I was a little kid I’ve been around high school football and all that, around my dad,” says Moore. “So, hopefully I can lean on some of those experiences and then through my playing times in college and certainly the NFL, as well."

It’s his show, and it won’t be long now before the wunderkind gets his shot to put his fingerprints all over the Cowboys offensive success, or failure for that matter.

"He knows what he wants,” says Witten. "And guys want to play hard for those guys. That’s what you want in a coordinator."

That along with a few more scoring play and we may be on to something.