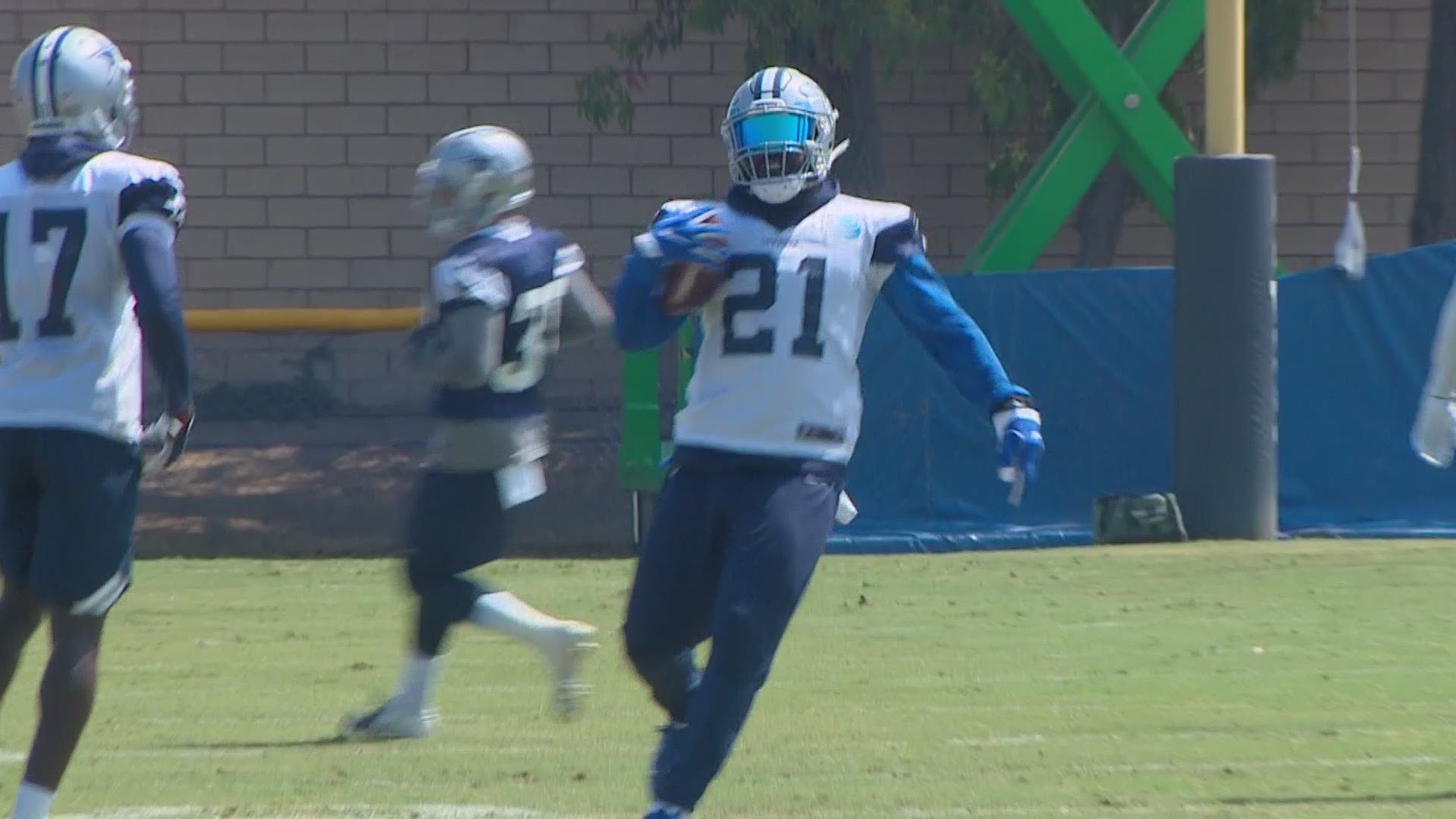 DALLAS — The running back position is one that sparks debate on both sides of the spectrum in relation to the NFL Draft and free agency. As a whole, the position has been greatly devalued to the point that many teams use a plethora of backs throughout any given season to fill the role.

In the current pass-happy league that the NFL has become, you don’t find many organizations that will put premium capital into the position or even give their backs a long-term deal beyond their rookie deal.

The exception in most recent times surrounds Todd Gurley who just inked a four-year deal that makes him a Ram until after the 2023 season where he will then become a free agent at 29 years of age. Do the Dallas Cowboys dare do that with their two-time NFL rushing champion Ezekiel Elliott?

One could argue that if Gurley is an exception to the rule and not the new standard, then Elliott certainly is one as well. Both are involved in the passing game and are phenomenal runners with the ball in their hands. Both Gurley and Elliott came to their teams at the cost of premium draft capital with Gurley being selected with the tenth overall pick in the 2015 NFL Draft and Elliott arriving in Dallas with the fourth overall selection a year later in 2016.

In the modern age of a salary cap, and with top picks at a premium, teams don't often like to select a player that high in the draft with the thought that they won't have them beyond the initial rookie contract. That's why the Rams extended Gurley and why there are already these whispers about what the Cowboys plan to do next with Elliott.

The tired argument that it is the blocking by a stellar Cowboys' offensive line that really makes Elliott exceptional isn’t completely true. While yes, they are able to open holes for the former Buckeye, but it is his agility and physicality that allow him to be really special. Since 2016, Elliott has more yards after contact (2,567) than he does prior to contact (1,481).

Since his rookie year, spanning the last three seasons, not a single back is within 500 yards of Elliott for most rushing yards in the NFL. That's even with Elliott having done his work in fewer games played after serving a six game suspension in 2017. Elliott is also the only back in the NFL to average over 100 yards per game since he entered the league. Essentially what all of these numbers and stats mean is Elliott is the best running back in the game right now.

But will he remain the best? That brings us back to that argument over whether or not the Cowboys should pay him long term. That process has started a bit as Chief Operating Officer Stephen Jones recently said that they will pick up his 5th year option to remain with the team through the 2020 NFL season.

The team will likely look for a running back during the draft or the undrafted free agent rush that will begin Saturday after the conclusion of the festivities.

RELATED: Could Cowboys take a running back during Rounds 1-3 of NFL Draft?

That should not be taken to mean that the Cowboys are looking for life after Elliott. Rod Smith is now gone and that leaves Darius Jackson as the only other true running back on the roster. The Cowboys will need another back that could spell Elliott from time-to-time but not one that should replace him.

While Dak Prescott and Amari Cooper are heading into the 2019 season on the final years of rookie contracts and should be the top priorities in terms of new contracts, Elliott shouldn’t be very far behind in the pecking order. With his fifth-year coming up in 2020, this gives the team ample time to come up with a contract that works for both parties.

Given what Elliott has done for a team that likes to establish the run, it makes sense to try and get him a deal despite how the position has been devalued.

Following the loss of DeMarco Murray, the team tried to employ a running back by committee approach with Joseph Randle and Darren McFadden before ultimately rolling with McFadden. McFadden was effective but the cobbled together approach wasn’t on that same level of production which ultimately led to the Cowboys having that fourth overall selection that they used to pick Elliott.

A team that uses a top five selection on a player shouldn't do so with the expectation of moving on after the rookie contract regardless of position. As long as he stays healthy, Elliott should still remain in the long-term plans. How it all plays out will be something to watch over the next couple of offseasons.

Do you think that the Cowboys should be more active in trying to extend Ezekiel Elliott's deal or should they wait and see if he holds up through the life of his rookie contract? Share your thoughts on Zeke's with Patrick on Twitter @DraftCowboys.