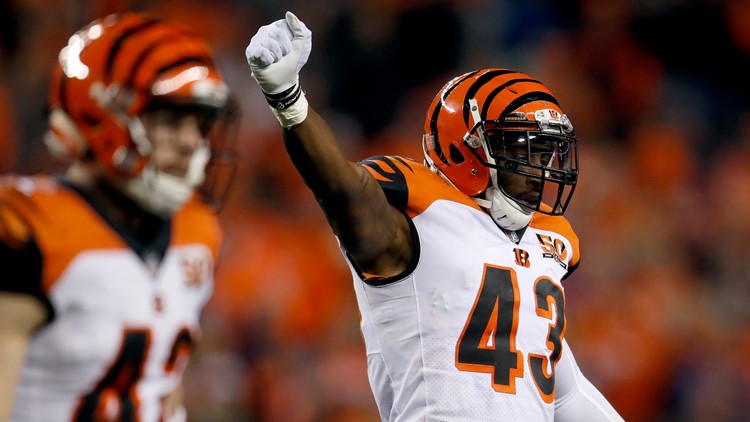 DALLAS — One of the ways the Dallas Cowboys get ready for the NFL draft is by shoring up their entire roster, and the answer to addressing safety pre-draft was by signing George Iloka.

The Cowboys inked Iloka to a one-year contract during the second wave of free agency. Safeties coach Greg Jackson is confident in the abilities of the former Cincinnati Bengal and Minnesota Viking.

"I think he's a player that can do both, but I think where he stands out is as a player that's down low, down in the box, and in the intermediate area, in zone coverage," Jackson said. "I think that's where he's most effective, but he can do both."

RELATED: Donovan Wilson is a day 3 safety Cowboys like for NFL Draft

Iloka is seen as a strong safety, partly because five of his seasons, four with Cincinnati and one with Minnesota, were spent playing as a strong safety in Mike Zimmer's scheme. Iloka played two seasons under Paul Guenther, Zimmer's successor as the Bengals defensive coordinator from 2014-17, before being moved to free safety. As a free safety, Iloka produced 152 combined tackles, four interceptions, and 12 pass breakups, one of his more productive two-season stretches of his career.

"He's not a negative player if he goes and plays the back part of the field," said Jackson. "Just like all of these college players, you look for two or three things and then you've got to coach the rest. We think he has all the intangibles. We'll see what happens."

Iloka, another former Boise State product the Cowboys seem to love, stands at 6-4, weighing 229 pounds. The 29-year-old is a tall, rangy safety who can close fast and take away windows for throwing lanes.

Said Jackson: "I think his length, his size, his ability to play down low, down in the box. He's a really bright, smart player. Very durable. And he's another player that won't hurt you playing the back end of the field."

One of Iloka's former NFL coaches endorsed the notion that the veteran safety is a dependable player who allows plays to come to him. It was a brief scouting report that Jackson agreed with.

"That's it," Jackson said. "That's exactly it. And that's who he is. You're a smart player. That says a lot. That takes you a long way, a long ways."

The signing of Iloka doesn't mean the Cowboys will neglect safety during the NFL draft, which for Dallas starts with Round 2 on April 26. However, the presence of Iloka means the Cowboys have addressed the need enough to allow them to take the best player available. If the Cowboys do take a safety, they will have to compete with Iloka for snaps.

"I think he brings some good qualities to us in the secondary," said Jackson. "We're going to have good competition back there."

Do you think the Cowboys will pick a safety with one of their first picks in the NFL Draft or do you think they'll go with what they have at the position? Share your predictions with Mark on Twitter @therealmarklane.