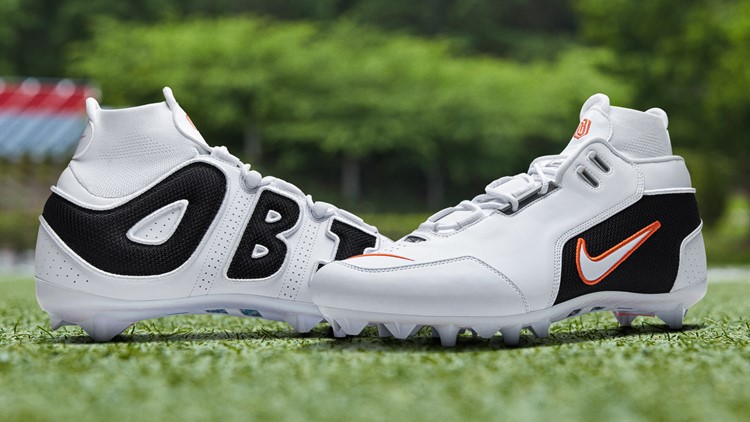 When Odell Beckham Jr. first got traded to the Cleveland Browns, one of the first people he heard from was LeBron James.

On Sunday, the 3-time Pro Bowl wide receiver will pay homage to the former Cleveland Cavalier.

As he has done all season, Beckham will wear a pair of customized cleats when he takes the field for the Browns' matchup with the Denver Broncos. For pregame warmups, Beckham will wear a customized pair of his signature Nike Vapor Untouchable Pro 3 OBJ Uptempo Cleat inspired by the Nike Air Foamposite One "Alternate Galaxy," which are similar to the pregame cleats he wore prior to the Browns' Week 3 loss to the Los Angeles Rams.

RELATED: 3 things to watch for: Cleveland Browns at Denver Broncos

Come kickoff, Beckham will switch into a less flashy -- but still stylish -- pair of custom cleats reminiscent of the Nike Air Zoom Generation. First released in 2003, the Air Zoom Generation served as James' first signature Nike shoe during his rookie season with the Cavs.

At his introductory press conference with the Browns, Beckham revealed that James reached out to him following the March trade that sent the 2014 NFL Offensive Rookie of the Year from the New York Giants to Cleveland.

“I asked him if I could borrow his house, and he said it was too big for me," Beckham said. "He will give you a little bit of advice here and there. He said, ‘You are going to love it.’ That is like my idol and the person I look up to the most. That is my guy. To see what he did to bring a championship here. I just want to be able to do that same thing."

During last week's loss to the New England Patriots, Beckham wore a pair of orange cleats with Halloween-themed pumpkin designs.