The Cleveland Browns fought their way to a 21-7 win over the Pittsburgh Steelers at FirstEnergy Stadium in Cleveland Thursday night. 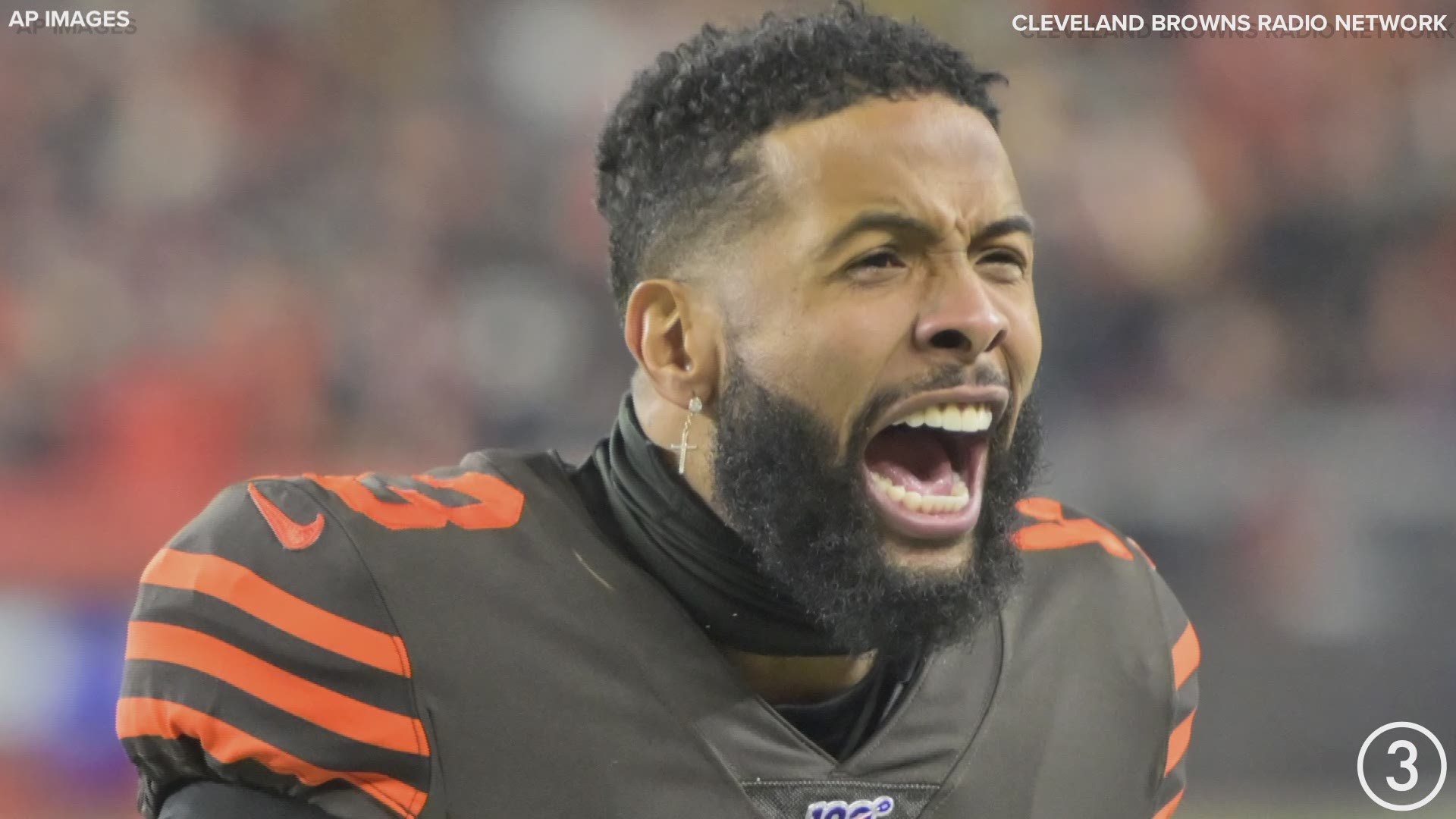 Cleveland Browns quarterback Baker Mayfield has a flare for the dramatic and penchant for making plays on the biggest stages, and he certainly proved that to be true in a nationally televised “Thursday Night Football” game against the Pittsburgh Steelers at FirstEnergy Stadium in Cleveland.

Mayfield threw for two touchdowns -- one and eight-yard scores -- and ran for a third tally in leading the Browns (4-6) to a 21-7 victory over the Steelers (5-5) in front of jubilant home fans.

The win over the Steelers gave the Browns consecutive victories for the first time this season and improved their record in the AFC North Division to 2-0 with four more games against the Cincinnati Bengals, Steelers and front-running Baltimore Ravens remaining over the final six weeks of the 2019 regular season.

The Browns and Steelers will renew their rivalry in just 17 days, as Cleveland travels to Heinz Field in Pittsburgh for the return match on December 1. However, before the rivalry with the Steelers continues, after the long weekend, the Browns will play the Miami Dolphins in their third consecutive home game on November 24.

The win over the Steelers marked the first time since returning to the National Football League in 1999 that the Browns defeated Pittsburgh and Baltimore in the same season.

Quarterback Baker Mayfield is having quite the day while leading the Cleveland Browns’ offense against their most heated rival in the AFC North Division, the Pittsburgh Steelers, in front of a national-television audience on “Thursday Night Football.”

After the Browns collected their third interception of the game, a second takeaway from veteran linebacker Joe Schobert, Mayfield quickly converted the turnover into points.

On third-and-goal from the Pittsburgh eight-yard line, Mayfield withstood a collapsing pocket and delivered a throw to the back of the end zone for tight end Stephen Carlson, who despite tight coverage from a Pittsburgh defender, hauled in the catch.

Austin Seibert’s extra point gave the Browns a 21-7 lead over the Steelers late in the fourth quarter.

10:34 p.m./ET-Steelers get on the board with Rudolph TD pass

After struggling to move the ball down the field for the whole first half, the Pittsburgh Steelers took advantage of several Cleveland Browns penalties and found their way into the end zone late in the third quarter of their AFC North Division game on “Thursday Night Football.”

On first-and-goal from the Browns’ three-yard line, second-year quarterback Mason Rudolph flared a pass out to the left flat for running back Jaylen Samuels. After securing the catch, Samuels turned upfield and hustled into the end zone.

With the successful extra point try, the Steelers cut down the Browns’ lead to one score, 14-7, with 5:39 to play in the third quarter at FirstEnergy Stadium in Cleveland.

Earlier in the drive, the Browns committed three penalties, the first a 15-yard unnecessary roughness call on safety Damarious Randall that led to an ejection, and then, a five-yard illegal contact violation against defensive back Juston Burris.

The biggest infraction came when rookie cornerback Greedy Williams failed to look back for the ball and still made contact with a receiver down the field, and the spot foul was a 38-yard infraction when it was walked off by the officials.

Of the 87 yards the Steelers accrued on the drive, 58 were on Browns penalties.

On a first-and-10 play from the Pittsburgh 13-yard line, Steelers quarterback Mason Rudolph lofted a pass toward wide receiver Diontae Johnson near the left sideline, but the ball flew incomplete into the bench.

As the play was coming to an end, Randall delivered a helmet-to-helmet hit on Johnson and knocked the receiver to the ground. Johnson remained on the field for several minutes before he was helped to the Pittsburgh medical tent behind the bench and underwent an evaluation for a concussion.

After a discussion among the officials, Randall was disqualified from the game for the hit.

The penalty was one of three against the Browns on what turned out to be an 87-yard scoring drive when Rudolph threw a touchdown pass to running back Jaylen Samuels on the fifth play of the drive.

The Cleveland Browns utilized the legs and right arm of second-year quarterback Baker Mayfield to cross the goal line twice in the first half and they took a two-score lead over the Pittsburgh Steelers into halftime of their AFC North Division battle on “Thursday Night Football” at FirstEnergy Stadium in Cleveland.

In the first half, Mayfield completed 11 of his 19 attempts for 151 yards with the one-yard touchdown pass to wide receiver Jarvis Landry early in the second quarter.

After a would-be 43-yard touchdown pass was taken off the board when wide receiver Odell Beckham Jr. was marked short of the goal line after a replay review, Mayfield ducked the shoulder and pushed the ball into the end zone for his second rushing touchdown of the season.

Mayfield outdueled Steelers quarterback Mason Rudolph over the first 30 minutes of play, as Pittsburgh’s second-year signal-caller completed just 12 of his 21 attempts for 102 yards with one interception on a deflected pass.

After a much maligned effort against the Buffalo Bills in goal-to-go situations, the Cleveland Browns made a second successful trip inside the 10-yard line against the Pittsburgh Steelers in the first half of their AFC North Division matchup at FirstEnergy Stadium in Cleveland.

On first-and-goal from the Pittsburgh one-yard line after a pass interference penalty against Steelers cornerback Joe Haden, Browns quarterback Baker Mayfield flared a pass to wide receiver Jarvis Landry, who broke free of coverage while running from the middle of the field to the left sideline.

Landry hauled in the touchdown pass and rookie kicker Austin Seibert added the point-after to give the Browns a 14-0 lead over the Steelers with 9:55 to play in the first half.

The Browns’ scoring drive covered 77 yards in seven plays and took just over four minutes off the first-half clock.

The Cleveland Browns started fast, and while they could not mount another scoring drive, the players and coaches built themselves a 7-0 lead over the Pittsburgh Steelers after the first quarter of play in their “Thursday Night Football” matchup at FirstEnergy Stadium in Cleveland.

A one-yard touchdown run from quarterback Baker Mayfield gave the Browns a 7-0 lead less than four minutes into the game, and after forcing two punts and a missed field goal, Cleveland maintained the one-score advantage over the Steelers.

Mayfield completed seven of his first 11 throws for 78 yards and narrowly missed a touchdown pass to wide receiver Odell Beckham Jr., who was marked short of the goal line after further review. Running back Nick Chubb rushed for 15 yards on three carries.

Steelers quarterback Mason Rudolph was five for nine for 39 yards in the first quarter.

The Cleveland Browns had a host of issues running the ball in goal-to-go situations against the Buffalo Bills Sunday, but they made an early statement against the Pittsburgh Steelers on “Thursday Night Football” from FirstEnergy Stadium in Cleveland.

After a replay review took a touchdown off the scoreboard, quarterback Baker Mayfield called his own number, followed his lead blockers and plowed across the goal line for his second rushing touchdown of the season.

With Austin Seibert’s point-after, the Browns took a 7-0 lead over the Steelers with 11:12 to play in the first quarter of the AFC North Division game from Cleveland.

The play that was overturned was a 43-yard touchdown pass from Mayfield to wide receiver Odell Beckham Jr. Upon further review, Beckham Jr.’s knee was down at the one-yard line before the ball crossed the goal line.

The Browns’ scoring drive covered 65 yards in five plays and took just over two minutes off the clock.

The Cleveland Browns are going to be without two starters for their “Thursday Night Football” game against the Pittsburgh Steelers at FirstEnergy Stadium in Cleveland tonight.

Defensive end Olivier Vernon and safety Eric Murray were listed on the inactive list for the Steelers game. Vernon is working through a knee injury suffered in a 24-19 loss to the Denver Broncos, while Murray is rehabbing from knee surgery, which he underwent following the loss at the New England Patriots on October 27.

In seven games this season, his first with the Browns, Murray made 22 total tackles, including 15 solo stops and seven assists, with one sack and one pass defended.

Prior to the injury, Vernon registered 23 total tackles, including 19 solo stops and four assists, with three sacks for 20 lost yards (third-most on the team in both categories) and one forced fumble. In Vernon’s place, second-year lineman Chad Thomas got the start against Buffalo.

Lamm has been out of the lineup since Week 1, when he suffered a knee injury shortly after taking over for left tackle Greg Robinson following his ejection in the loss to the Tennessee Titans at FirstEnergy Stadium in Cleveland.

Despite suffering a knee injury when he was hit on the kneecap with a defender’s shoulder pad in a loss at the Broncos, tight end Ricky Seals-Jones is active for tonight’s game. Currently, Seals-Jones is the Browns’ sixth-leading receiver with nine catches for 155 yards and is tied for the team lead with two touchdown receptions.

Second-year lineman Chad Thomas is expected to start for Vernon at defensive end.

The Cleveland Browns did not have much time to recover and prepare for a key AFC North Division battle against the Pittsburgh Steelers at FirstEnergy Stadium on “Thursday Night Football” this week.

Following a hard-fought 19-16 victory over the Buffalo Bills at home Sunday, the coaching staff immediately went to work on film study of the Steelers and formulated a game plan, which the players had just three days to absorb ahead of the Steelers game.

“It is obviously a quick turnaround,” linebacker Joe Schobert said. “I think a lot depends on how your body comes out the week before. Mentally, everybody has to get a quick jumpstart on the next week and it is a huge crunch, kind of like studying and planning finals in college.

“You just have to get after it and make sure you are taking care of your body -- cold tub and getting every recovery aspect that you can, both here and when you are at home.”

Credit: David Richard/AP
Cleveland Browns quarterback Baker Mayfield throws a pass during the first half against the Buffalo Bills at FirstEnergy Stadium in Cleveland on Sunday, November 10, 2019.

The Browns have one of the easiest second-half schedules in the National Football League this season, but they did themselves no favors over the first eight games, as the AFC North Division upstarts began the year with a 2-6 record.

However, the Browns kicked off the second half of the season with a hard-fought victory over the Bills, and are looking to continue building in a positive direction, and remain undefeated in AFC North Division play when they host the Steelers.

“It’s been a minute, and so, from that standpoint, it’s going to be huge for us to continue to put another one, lay another brick in the foundation. We can’t be a team, at this point now, to win one, lose one, win one, lose one. We have to try to put a stretch together, and I think that’s the main focus, continuing to stay 1-0 this week.”