Can the Big 12 survive as a conference without Oklahoma and Texas?

The rumors are true, Oklahoma and Texas are planning to leave the Big 12 for the SEC. What does this mean for the future of the Big 12? 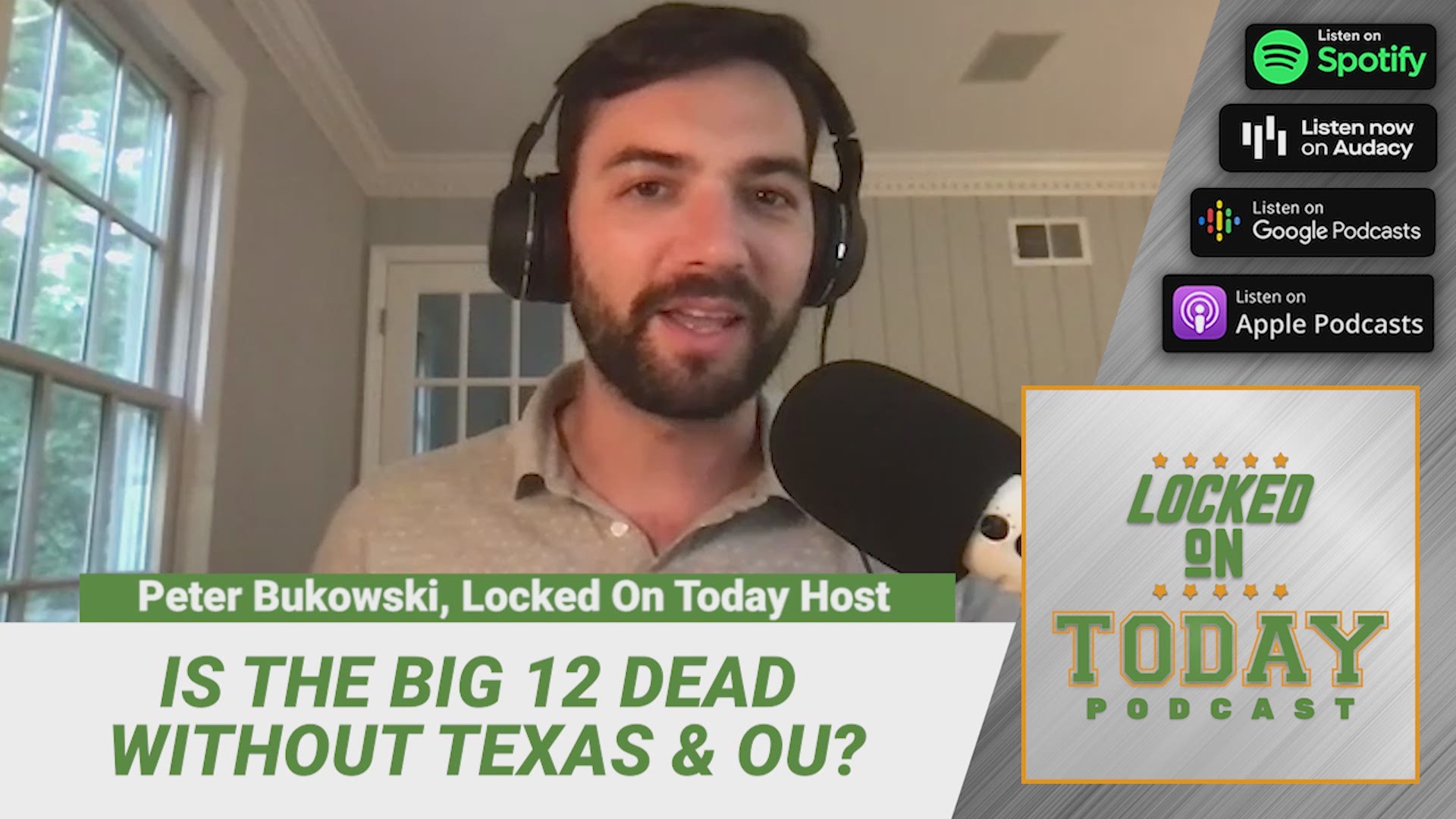 IRVING, Texas — The Thursday rumors are true as multiple reports on Friday indicate that the University of Oklahoma and University of Texas are planning to tell the Big 12 their intentions to leave the conference for the Southeastern Conference.

While it's not a done deal yet, and reportedly wouldn't happen fully until 2025, this move will send shockwaves throughout the college sports landscape and it won't just change the SEC, it's going to change everything.

On Friday's Locked On Today podcast, WFAA sports anchor and reporter Mike Leslie joined Peter Bukowski to talk about the benefits of going to the SEC for Texas and Oklahoma and what it means for the Big 12 conference.

Is the Big 12 dead without Texas and OU?

Leslie said that if this is the way things are going to go with Texas and Oklahoma leaving for the SEC, the remaining eight teams in the Big 12 will go elsewhere.

"Without Oklahoma and Texas, the Big 12 is dead," Leslie said. "There is no Big 12 at that point. There's no money to be made in a league that doesn't include these two teams."

Reports have already surfaced that Kansas has been in communication with the Big 10 conference and the dominoes are likely to keep falling on that front.

"There's no money to be made in a league that doesn't include these two teams."

Is the Big 12 dead without Texas & OU? @wfaa's @MikeLeslieWFAA joined @Peter_Bukowski on Locked On Today.

Leslie said this realignment news isn't exactly shocking, especially for the Big 12 after the Texas A&M and Missouri defection nearly a decade ago.

"When this happened the last time around, it was clear that another round of this is imminent at some point," Leslie said. "And now here we are, the Big 12 TV contracts are getting close to their finish. It makes sense that now is about the time that these big name programs are starting to look at, 'OK what is our next move?' If there's one constant in college athletics, it is that you have to change in order to survive. UT and OU looked at the writing on the wall and said, 'alright we need to figure out what our next power play is' and this is it."

Are other SEC teams happy about this news?

At least one school is obviously and publicly not happy with this news and that's Texas A&M. The Aggies left the SEC nearly 10 years ago so they could be the only team from Texas in the SEC. That improves recruiting immensely. But, this may throw a wrench in things at least on the football side of things.

For other SEC teams, it means higher profiles and more money. Additionally, it's going to lead to some questions about "superconferences" and the future of the NCAA as the governing body of college athletics.

Chris Gordy, Locked On SEC podcast: This is absolutely monumental news and a massive shakeup to the college football world as we know it...A lot of SEC fans not happy about the move including the Texas A&M Aggies. But from a power standpoint, the SEC has made the first move to a superconference."

If you’re an #SEC fan, do you like it? #Oklahoma #Texas 🏈🤘 pic.twitter.com/cyUY2cHE5U

Cole Thompson, Locked On Aggies Podcast: "Now with Texas joining, this could really drastically change things when it comes to recruiting. Texas A&M has the pitch that they're the only team in the SEC from the state of Texas and more than that, they're playing NFL-caliber talent week in and week out...this could be detrimental to Texas A&M and their success."