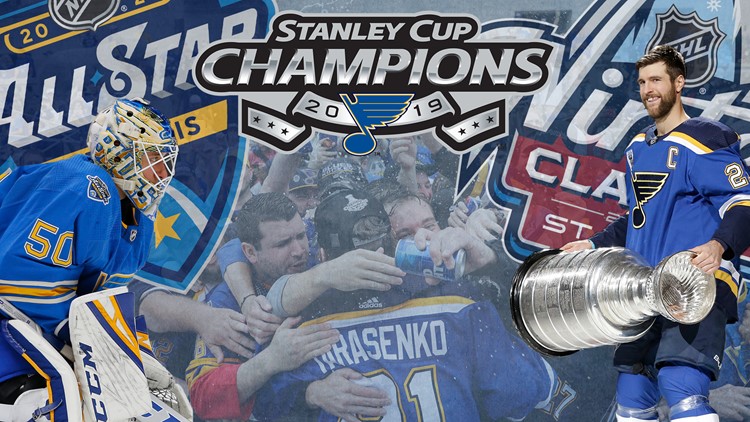 It's the best time to be a hockey fan in St. Louis

ST. LOUIS — The St. Louis Blues will enter the 2020 all-star break with the most points in the Western Conference.

Let me try that again. The defending Stanley Cup champion St. Louis Blues will enter the 2020 all-star break with the most points in the Western Conference.

Wait, hold on, that's still not right. The defending Stanley Cup champion St. Louis Blues will enter the 2020 all-star break with the most points in the Western Conference and send four players and a coach to represent them at the all-star game which, oh by the way, will be played in St. Louis.

There we go. Third time's a charm.

I'd say the Blues have spoiled us over the last 12 months, but this hockey euphoria is more than deserved in St. Louis.

We really are living in the best time to be a St. Louis hockey fan.

On the ice, it's pretty evident just how good it's been.

Since last January, the Blues have been the best team in hockey. No debate. After turning things around a year ago almost to the date, they crashed the playoffs and rambled all the way to the franchise's first Stanley Cup.

Now, they've kept it up and are still looking down on the rest of the league.

Halfway through the 2019-2020 season, the Blues look head and shoulders above the rest of the West, and only have a few teams in the east able to compete with them for the title of best in all of hockey.

They have five all-stars in 2020 (including head coach Craig Berube), the defending Selke Award Winner (Ryan O'Reilly) on the roster and a young goaltender (Jordan Binnington) who looks like he's going to be a force in the NHL for a long time.

Off the ice, things are just about as exciting.

In a little more than a three year span, the city of St. Louis will have hosted a Winter Classic, Stanley Cup Final and NHL All-Star Game. Not too shabby. Our city has shown it can step up when it comes to big events, and put on one heck of a spectacle.

The Blues have also significantly upgraded the experiences for fans when it comes to watching their team. The improvements at the Enterprise Center were a long time coming, and have drawn rave reviews from Blues fans. And the new Centene Community Ice Center is an immaculate new facility, that has been praised by just about everyone.

St. Louis has also proven over the recent years it can be a hotbed for young hockey talent

In 2016, five first round picks in the NHL draft came from our area. Now, most of them are playing in the NHL. From Stanley Cup champion Pat Maroon, to the Tkachuk boys, to Paul Stastny out in Vegas, Clayton Keller as the face of the Coyotes in Arizona or Ben Bishop dominating in Dallas, St. Louis talent is on display nightly in the NHL.

Fans that have been following the franchise since its inception probably thought prosperity like this might never come. The Blues always seemed to play the role of Charlie Brown. The lovable underdogs you wanted to see win, but it never quite worked out for one reason or another. Well, things are working out in a big way right now, and it's fun seeing just how long this train can keep rolling.

RELATED: Why it's been so difficult for Vladimir Tarasenko to sell this St. Louis home

RELATED: Your guide to the 2020 NHL All-Star Game in St. Louis

RELATED: It's on! Binnington accepts Bieber's breakaway challenge for charity