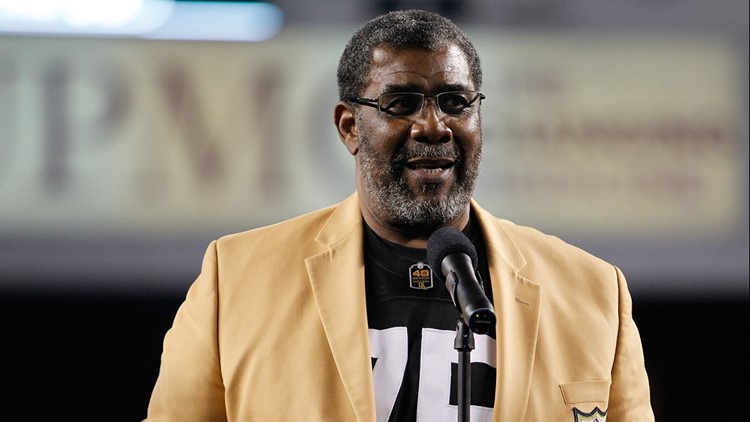 Former Pittsburgh Steelers defensive tackle Joe Greene has his number retired during a halftime ceremony against the Baltimore Ravens at Heinz Field on November 2, 2014 in Pittsburgh, Pennsylvania. (Photo by Justin K. Aller/Getty Images)

The North Texas football program is on some kind of roll.

First, there was the viral fake punt return against Arkansas a couple weeks ago, when UNT"s Keegan Brewer bluffed the Razorbacks into thinking he called a fair catch, only to race past defenders for a 90-yard touchdown. The Mean Green's 44-17 win over the SEC program earned them votes in the Associated Press poll.

And after a 47-7 win over Liberty this past week, UNT is throwing it back with retro jerseys Saturday against Louisiana Tech, when the statue of UNT legend "Mean" Joe Greene will be dedicated at Apogee Stadium.

On Wednesday, the program unveiled the jerseys in style with a promo featuring Greene himself. In the promo, a Mean Green player sits at a locker, holding a retro UNT helmet. Greene steps into the frame, wearing his gold Pro Football Hall of Fame jacket.

Greene then tosses the player a No. 75 jersey – Greene's number, which hasn't been worn by a UNT player since Greene played there in the 1960s. (If you can't see the embed below, click here to watch the promo on the UNT football Twitter account)

He’s the 🐐 and the only Mean Green Football player to wear the No. 75 in the last 50 years. Until this week. For one day only, the iconic Joe Greene jersey is coming out of retirement. #GMG #UniSwag pic.twitter.com/jeaqesZ5n2

The promo appears to be a nod to the iconic Coca-Cola commercial Greene filmed in the 1970s, when he was an all-Pro defensive tackle for the Pittsburgh Steelers.

In that ad, Greene limps down the tunnel to the locker room when a young fan offers him a Coke. Greene reluctantly takes a swig. As the fan walks away, Greene says, "Hey kid," then tosses him his jersey.