The former No. 1 draft pick took Rudolph's helmet off and swung it violently, hitting Rudolph over the head. 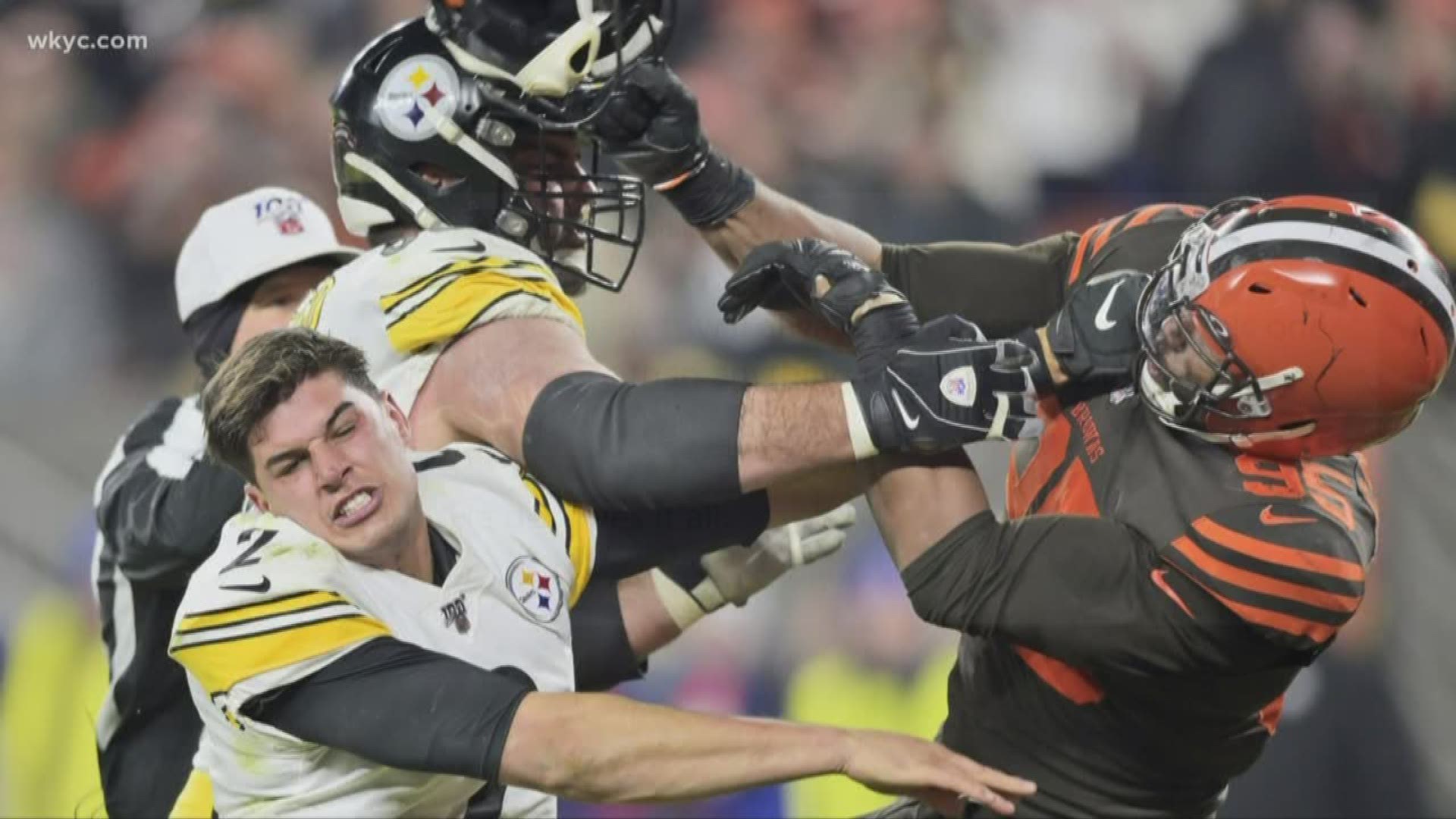 CLEVELAND — The NFL has suspended Cleveland Browns defensive end Myles Garrett indefinitely for his role in a brawl at the end of Thursday night's Browns-Steelers game culminated in Garrett hitting Pittsburgh quarterback Mason Rudolph over the head with Rudolph's helmet.

Garrett will be suspended for at least for the remainder of the season and postseason, and must meet with the Commissioner’s Office before he can be reinstated.

Garrett’s outburst came with 8 seconds left in Cleveland’s 21-7 win over the rival Steelers on Thursday night, a game that will not be remembered for anything that happened in the first 59 minutes.

Garrett, who played at Arlington Martin High School and Texas A&M, faces a stiff NFL suspension and Steelers center Maurkice Pouncey will likely be disciplined for kicking Garrett in the head.

Late in the game, Rudolph threw a pass to the left side, while Garrett wrapped him up and dragged him to the ground. Garrett's tackle of Rudolph itself could've been deemed roughing the passer, but that was only the beginning.

Garrett and Rudolph tussled on the ground, and Rudolph attempted to take Garrett's helmet off.

“I lost my cool and I regret it,” Garrett said. “It’s going to come back to hurt our team. The guys who jumped into the scrum, I appreciate my team having my back, but it never should have gotten to that point. 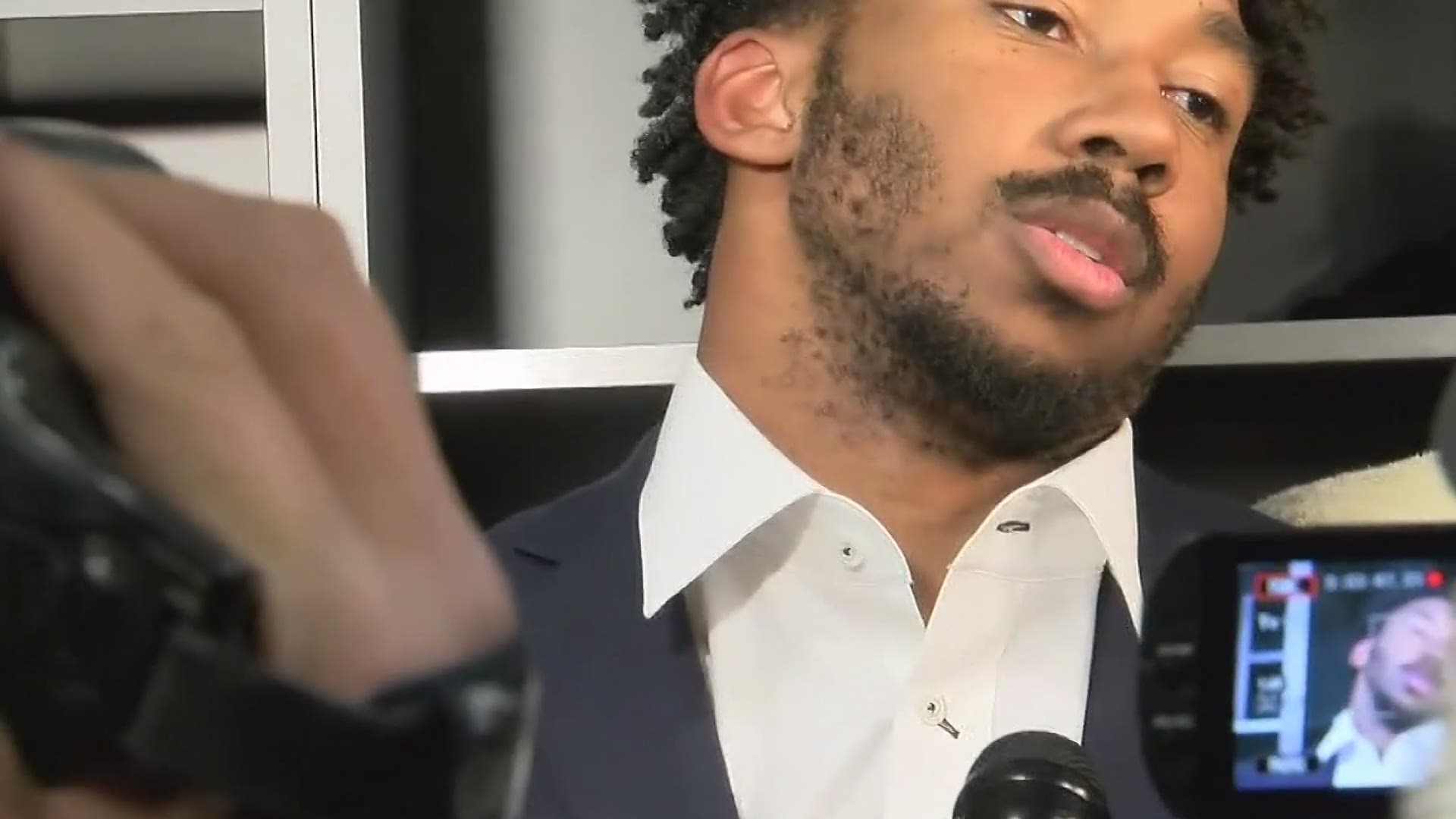 As Rudolph and some of his Steelers teammates chased after Garrett, the former Arlington Martin product took Rudolph's helmet, swung it high in the air, and slammed it down on the top of Rudolph's head. Rudolph recoiled, threw his arms out to the officials looking for a flag -- or perhaps a member of law enforcement -- and fell to the ground.

Rudolph threw his arms in the air in disbelief after the impact, and Pouncey retaliated by punching and kicking Garrett.

“I thought it was pretty cowardly and bush league,” Rudolph said. “I’m not going to back down from any bully. I felt like I had a bone to pick with him. I appreciate the line always having my back, but I was angry.”

Mayfield said he didn’t speak with Garrett, but he expects his teammate to be accountable.

“This is a physical, violent game and there’s moments if you don’t keep your cool, bad things can happen and he knows that. It’s inexcusable and he knows that,” Mayfield said. “There’s no other way around it, he’s going to own up to it and he’s going to handle it and this locker room is going to have to come together because this is going to be a soap opera on the outside much like the media has portrayed us to be for the whole season.”

The incident overshadowed a win that put Cleveland back in the playoff picture and breathed some life into a season that had been slipping away.

Browns receiver Odell Beckham Jr. was shown replays of the brawl on the NFL Network set.

“It's ugly,” Beckham said. “It's not something we want in the NFL.”

Some on social media were speculating that it may go beyond that for Garrett. They wondered if this crossed the line into something that could lead to a criminal charge.

"Can you get charged with a crime for something that happens during an nfl game? has that ever happened? if this happened in the street, myles garrett would catch a charge. this is not a football play," tweeted Alex Glaze from Atlanta's 11Alive.

Rudolph, a second-year player who took over for the injured Ben Roethlisberger in Week 2, has already missed time this season with a concussion after he was knocked unconscious from a helmet-to-helmet hit by Baltimore Ravens safety Earl Thomas.