Winners of the AJC Peachtree Road Race have included Olympic medalists, multiple national champions and elite racers from around the world. 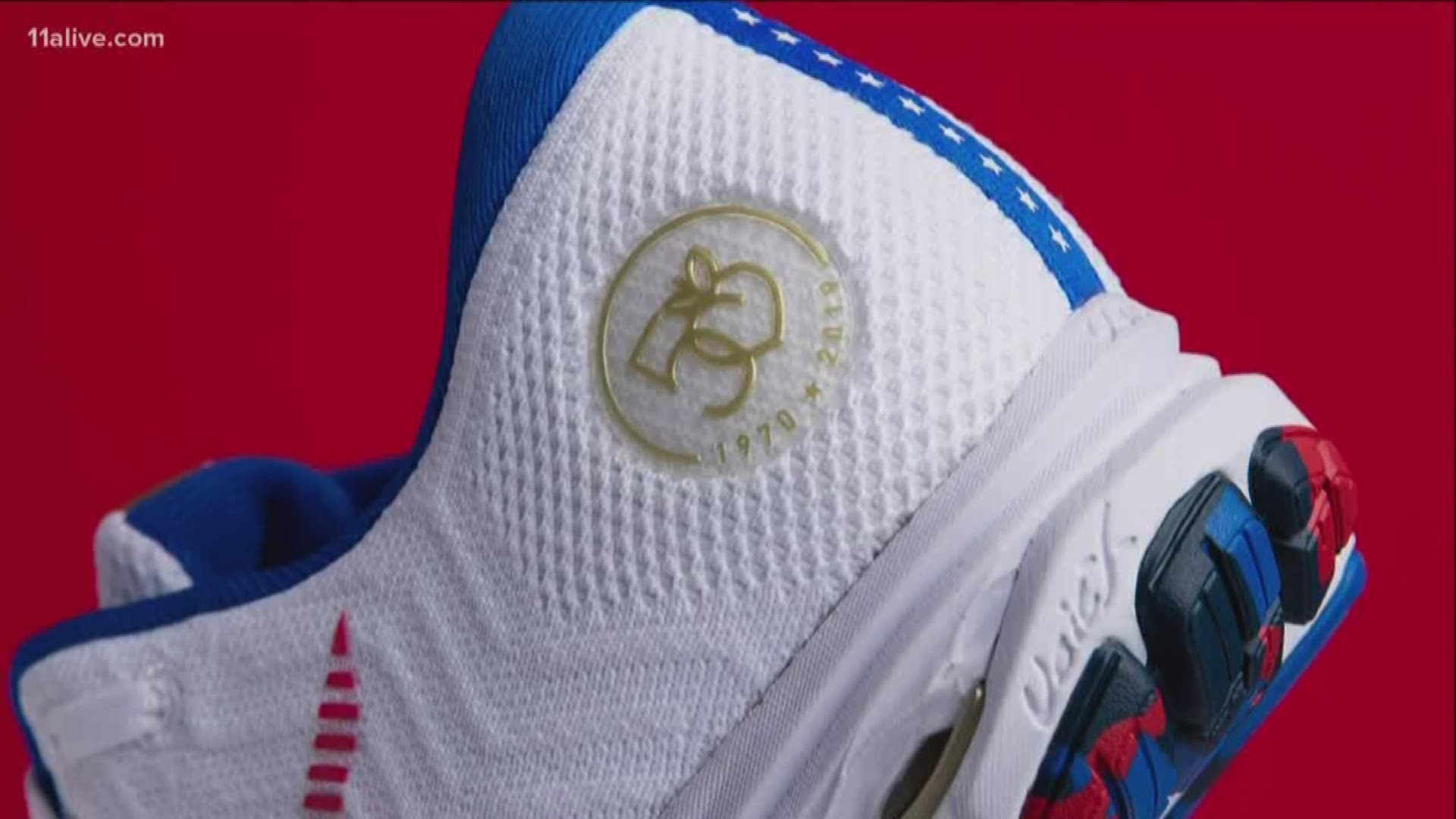 Winners of the AJC Peachtree Road Race have included Olympic medalists, multiple national champions and elite racers from around the world. For speed and longevity, three men stand out. Craig Virgin won the men’s individual footrace three times, a record; Craig Blanchette won the men’s wheelchair division a record six times; and Joseph Kimani set a course record in 1996 that, unbelievably, still stands today – by a lot. They are the fastest and most enduring of all Peachtree male winners.

In the summer of 1978, Craig Virgin was plying his trade – 5000 and 10,000 meter track racing – on the European circuit in Old World cities like Helsinki, Stockholm, Lausanne, Turku and Warsaw. He won here and there, but mostly finished a few places behind the world’s top distance men. The day after a seventh-place effort in Stockholm, he picked up a copy of the International Herald Tribune, and was stunned by a headline news story.

It chronicled a July 4 race in Atlanta, Georgia, the day before, won by fellow U.S. trackster Mike Roche. As he read, Virgin kept glancing back at one amazing fact: The story claimed that the 10K had attracted more than 12,000 participants.

Virgin had grown up on an Illinois farm, where he soaked up everything he could about the Olympics and world-famous events like the Boston Marathon. But even while his own track and cross-country career blossomed, he hadn’t realized the size of the running boom taking hold across America. He had missed entirely that a Southern capital city hosted one of the biggest, best and most competitive races.

Virgin valued those qualities. He was always looking to show his stuff on the grandest, most important stages. That’s what brought him to Atlanta the following July 4 for the 1979 AJC Peachtree Road Race.

Roche, the defending champion, had returned as well, and the two dueled over the first 5K, swapping the lead several times. Coming off Cardiac Hill, Virgin accelerated on the downhill and grabbed the front position for good. He sped across the finish line in Piedmont Park in 28:30.5, a course record.

Or, rather, he almost flew. In typically dramatic Virgin fashion, he took a long, airborne leap through the finish tape with both arms upraised and his fingers making the “V for victory” sign. The photo was so electrifying that adidas used it in national advertising campaigns for more than a year. “I just love running and performing in front of the crowd,” Virgin said. “I guess I’m like an artist or actor in that respect.”

Virgin won Peachtree again in 1980, and returned in 1981 seeking a three-peat. From the moment he walked out of his hotel that morning, he knew it would be a special day. Years later, he’d refer to a “perfect storm” of conditions: Excellent weather; a fast, deep field; someone who took the pace out hard; and the extra excitement of competing in an event televised nationally by Turner Broadcasting Systems.

Virgin had recently set up his professional running and marketing business – Front Runner, Inc. – and realized the TBS coverage might offer a chance for free coast-to-coast promotion. To that end, he designed bright yellow race shorts and a singlet, guaranteed to make a “here I am” statement. Of course, first he had to push that Front Runner outfit into camera position.

The early pace was fast, with Ric Rojas blasting through the mile in 4:21. Virgin held back, thinking only to run smart and efficient at this point. The tempo barely slowed in the second mile, a 4:22, as Adrian Leek took over the point position from Rojas. “Man, this is different,” Virgin remembers thinking. “I’m not sure I can maintain the pace today.”

But he did, slowly closing on Leek over the next several miles. They presented a contrast in styles – at least hairstyles. Leek, a Welshman who would later become a worldwide adidas executive, sported dark, shaggy locks that flounced off his shoulders as he ran. Virgin had a closely cropped Midwestern cut.

By 4 miles, Virgin had moved onto Leek’s heels. A quarter-mile later, he surged to the front. It was time to give it everything he had. Only problem: Rod Dixon was doing the same. “I looked back, and saw Dixon following me like a heat-seeking missile,” Virgin recalls. “I thought, ‘Man, you’ve got a 3:52 miler behind you. What are you going to do?’ ”

He relied on his several years of Peachtree experience and course knowledge. Once inside Piedmont Park, Virgin accelerated at every curve in the road. He knew Dixon would briefly lose sight of him on the twists and turns, making each a perfect opportunity to open a gap. “I used every inch of road on the curves to eke out a little more of a lead,” he said.

The strategy worked. Virgin opened up a seven-second advantage on Dixon, breaking the tape in 28:04, a course record by 26 seconds over his previous mark two years earlier. Leek placed third in 28:24, also under the prior record. “It was a historic, epic race in American and Peachtree race history, and I felt so grateful to win and set a course record,” Virgin said.

When Craig Blanchette arrived in Atlanta for his first Peachtree in 1987, he was just 19 years old and a self-described “absolute rookie” to wheelchair racing. What’s more, the Washington State resident had never faced the South’s fabled summer humidity, a new wrinkle to consider in his racing strategy.

Fortunately, he liked the course, with its literal ups and downs. “The technical nature of the course favored my approach to racing,” he said. “I always worked hard on the aerodynamics of wheel racing, more than many of my competitors back in those days.”

Result: Blanchette cruised to the first of his six Peachtree wins, the most by any Peachtree racer in any division until Tatyana McFadden won her seventh wheelchair crown in 2017. In that first Peachtree, Blanchette also set a record as the youngest winner. Two years later, in his second, he broke the wheelchair record by 48 seconds, clocking a 21:52. With the chairs getting lighter and more responsive every year, he also set course records in 1991 (20:17), and 1992 (20:07). He returned for two additional wins, in 1994 and 1995, with performances just slower than his record.

Blanchette was born with a condition called proximal femoral focal deficiency, PFFD. Basically, he has no lower legs; he has feet at his knees. By sixth grade, when he joined a wrestling team, he had decided he didn’t want people to stare at him because he was different, but rather because he was extraordinary. He would strive to stand out.

Years later, after he began speaking more frequently to various groups, he developed a telling response to the question he heard most often: What’s it like to have short legs?

“I’ll try to explain,” he would say, “but first you tell me what it’s like to have long legs.”

Blanchette has particularly sharp memories of his course-record 20:07 race in the 1992 Peachtree. By then he had secured a lightweight titanium racing chair, and honed his obsession with the details of successful wheelchair racing. He wore a suit that offered low air drag and made sure to assume proper form at all times to cut down on wind resistance.

He even carried a couple of extra water bottles on his chair through the early down slopes, discarding them before the course began climbing. “A little more weight helps you go faster on the downhills,” he explained. “I always tried to take advantage of the tricks that could help you perform better without producing physical pain. Psychologically, this helped me have the strength I needed to push harder on the painful parts, like the uphills.”

In 1988, Blanchette won a bronze medal in the exhibition 1500-meter race at the Seoul Olympic Games. That medal and his six Peachtree trophies occupy cherished spots on his office desk in Vancouver, Washington.

All his other awards are stuffed away in cardboard boxes.

“Peachtree is special to me,” he said. “The organization is superb, and they make it fun and fiercely competitive, with good prize money. I looked forward to going back every year.”

Blanchette remains active in the sport through his coaching work at CraveOptimalHealth.com. There, he offers healthy lifestyle advice to wheelchair athletes and others.

But midway through the Kenyan Trials 10,000-meter race, Kimani developed a side stitch and faded to sixth. So long, Atlanta? Not by a long shot.

With no Olympics on his schedule, Kimani made an earlier trip to Atlanta for the July 4 AJC Peachtree Road Race. Stung by his Trials disappointment, he hoped to make a big impression. “I wouldn’t say he was angry or seeking redemption,” remembers his manager, Tom Ratcliffe. “He was a quiet, unassuming guy. But he got it in his mind that he wouldn’t be denied at Peachtree, and might even go for a new record.”

But if he was hoping for a course record in 1996, he exceeded his own and everyone else’s expectations. In fact, he ran the most-impressive road performance ever on American soil. Kimani broke the tape in 27:04, an incredible 52 seconds under the previous course record and, up to that point, the fastest 10K ever run in the world.

At the time, Peachtree elite athlete coordinator John Curtin said, “It will stand for years. This was the greatest road race ever.” Curtin couldn’t have known how accurate his comment would prove. More than two decades later, no one has bettered Kimani’s time, and the second-fastest Peachtree performer (Sammy Kitwara, 27:22, 2009) stands a full 18 seconds behind Kimani. Kimani also won the 1997 Peachtree, in 27:43 – still the fifth-fastest win at Peachtree.

Good weather helped all the runners in 1996, with Simon Rono finishing second in 27:48. But it took more than relatively cool, dry conditions to power Kimani’s run. It took talent and guts. Kimani ran the last 5 miles alone, after Rono took a spill before the mile mark. “He fell down, so I decided to go,” Kimani said post-race.

No kidding. He covered the second, third and fourth miles at 4:14 pace. “I was looking at my watch, thinking, ‘Maybe I can break the record,’” Kimani said afterward.

Waiting at the finish line, Ratcliffe listened in awe to the splits being reported for his athlete. But he wasn’t shocked. “Joseph’s greatest strength was his ability, his mentality, to go to the front,” Ratcliffe noted. “That’s where he always wanted to be, and he scored many of his biggest wins running on his own.”

After breaking the tape, Kimani commented briefly to the press: “The weather was very good today, and the course was very flat.” Apparently when you reach a certain speed, the hills just disappear.

But Kimani’s otherworldly performances remain. He also still has the event record for Boilermaker 15 and owns the second-fastest time ever recorded on the super-competitive New Balance Falmouth Road Race 7-mile race course. He notched that time five weeks after his stellar Peachtree.

“If you take a look at non-marathon success over the history of U.S. road races, Kimani is unequaled,” said Ratcliffe. “He’s number one on the list.”