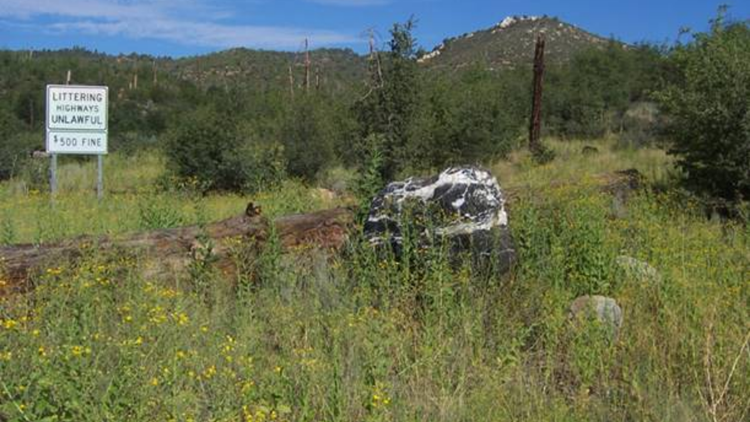 PRESCOTT, Ariz. — A local landmark is missing from along a highway south of Prescott, and forest officials are seeking its return.

The missing boulder weighs one ton and is black with white quartz running through it. Its distinctive look earned it the name “Wizard Rock.”

This isn’t the first time somebody has taken a beloved boulder from Prescott National Forest. In 2009, an 80-pound heart-shaped rock was taken from Granite Mountain Wilderness. After the local newspaper ran a story about it, the rock was returned anonymously.

Wizard Rock is the second boulder stolen from the forest over the last four months, forest officials said. The other boulder weighed about 750 pounds and was taken from Dearing Road near Thumb Butte.

Forest officials said neither of the rocks could be moved without heavy equipment.

Permits are required to gather and remove things like rocks, minerals, firewood, plants and trees from the forest.

Forest officials said the rock thief could face a maximum fine of $5,000 or six months in jail – or even both. Anyone with information is asked to contact U.S. Forest Service Law Enforcement at 928-443-8110.