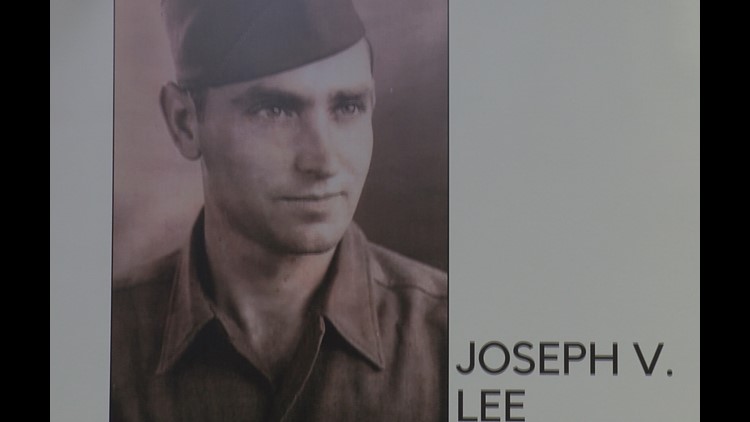 For the daughters of Joseph Lee, their father was a loving man of few words.

“The thing we always teased about was when he said something, you better listen to what he said because he rarely spoke,” said Lee’s eldest daughter, Beverli Everett.

But like many World War II veterans, he had a story to tell.

Although it’s stories many of them never speak for a very long time, if ever.

“I knew he was in the war. He wouldn’t talk about it,” said Everett.

It wasn’t until Beverli found something in high school that the family realized the magnitude of what their father had seen.

“A little wooden box that had lots of pictures and different things that he had accumulated while he was in Europe,” said Everett.

A box filled with everything from military papers, medals, memorabilia and pictures from the Dachau concentration camp in southern Germany.

“When you just look at these pictures, you just can’t imagine how horrid this experience would be," said Debbie Hurt. "And to think about a young man or young men going into these concentration camps and seeing this awful tragedy that happened. It’s just unbelievable,”

But even confronted with the pictures and questions, Lee was hesitant to talk about the war or Holocaust as time passed.

“I just said ‘Joe, why don’t you like to talk about the war?’ He just said, ‘It was too horrible. It was horrific. I don’t want to talk about it,’” said Lee’s son-in-law, Rodney Hurt.

Eventually, the family learned that Joseph was part of a team that stormed the beaches of Normandy in France three days after D-Day.

“My mother had made a few comments that they had been to a movie and there was some gunfire in the movie and he just got under the seats because it was real to him,” said Everett.

Ten months after coming ashore, Joseph was in southern Germany helping to liberate Dachau, one of the most notorious concentration camps of the war.

“Obviously, there’s many other men out there that cannot share their stories because it was so traumatic and they will carry it in their heart forever,” said Debbie Hurt.

But that’s why they say pictures like these are so important.

Not only to help tell the stories of an incredible generation that’s quickly disappearing, but also to help younger generations understand the atrocities that were committed during the Holocaust.

“Well it’s hard for me to believe that there are deniers of the Holocaust when there’s so much evidence of it,” said Rodney Hurt. “Somebody’s going to have to teach that this happened, so it won’t happen again.”

“I really believed if we don’t acknowledge what happened in the past, we are doomed to repeat the past,” said Everett.

And as their father takes his rightful place in this exhibit, both Beverly and Debbie say there is only one word that fits their father, as well as the men and women he served with.

“I think anybody that saw what those young men saw walking into these concentration camps and liberating those people are heroes,” said Debbie Hurt.