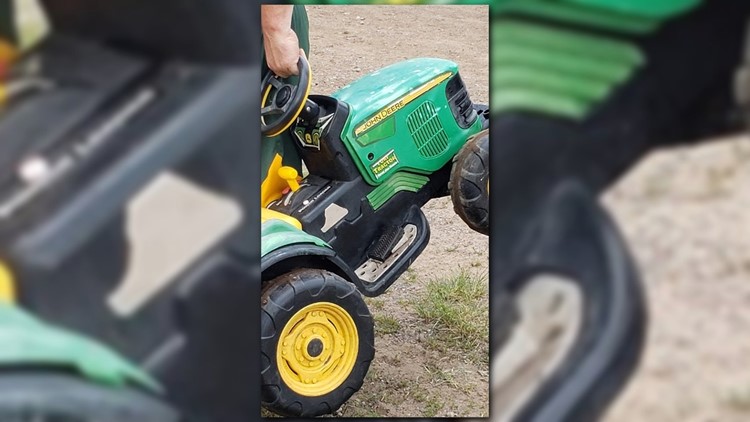 Photo by: Chisago County Sheriff's Office
A deputy carries the battery-powered tractor that a two-and-a-half year old boy road to the Chisago County Fair, all by himself.

RUSH CITY, Minn. — It's a tale that would make ol' George Jones jealous.

A Chisago County toddler is without wheels after the stunt he pulled Thursday night. Sheriff's sergeant Jason Foster tells KARE 11 that the two-and-a-half year old decided to take his battery powered John Deere tractor to the county fair without asking his parents.

Dispatchers received a call about a missing child at 6:51 p.m., and had him safe with a deputy two or three minutes later in the middle of the fair grounds. Then, the scope of the little fella's big adventure became clear.

As it turns out the toddler lives only a block and a half or so from the fairgrounds, and had seen the rides going up over the previous few days while riding in his parents' car. When the fair opened Thursday night he was excited and decided to check things out by himself.

Sergeant Foster says the little guy drove his tractor down the sidewalk, through a back gate and then navigated a heavy crowd that was there for the motocross races, finally arriving at his chosen destination: The Tilt-a-Whirl.

Chisago County Sheriff's Office
We are out at the Chisago County Fair all night and through the duration of the fair. Stop by our booth and say hello! First call of the night at the county fair was a missing 2 year old who drove...

Before he could get on State Representative Brian Johnson, a former Isanti County Deputy, saw the boy and figured something was amiss. Johnson flagged down a deputy, who made sure the tractor-driving kid was reunited with his dad.

While the tale has a mostly happy ending, there is one unfortunate development. It seems dad immediately suspended his son's driving privileges by pulling the battery from his John Deere.