A website published a phony fact-check under the label of 'satire.' Here are some tips from the VERIFY team to avoid getting fooled. 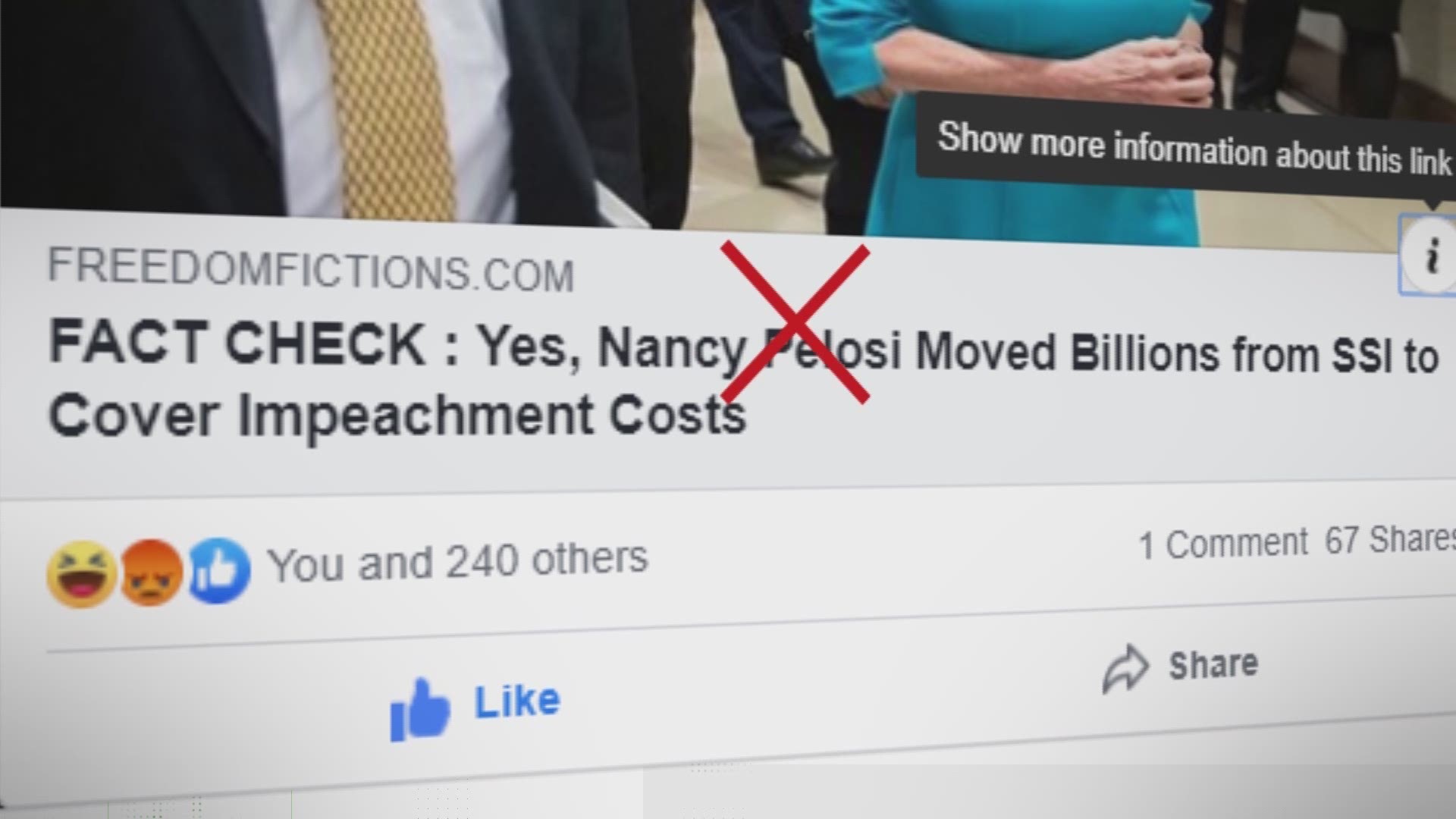 In November 2019, the headline “Pelosi Diverts $2.4 Billion From Social Security To Cover Impeachment Costs” caught attention and had a number of VERIFY viewers asking if it was true.

VERIFY fact-checked the claim and found it was false. The headline originated from a website that labels itself as satire.

But, this month, that same story gained a second life as a new version of the claim started to spread.

It’s a satirical post -- from the same author as the original -- but that didn’t stop it from being shared nearly 750,000 times.

There are a few things to learn from this.

Satirical reporting can easily be mistaken as real reporting when the headlines don’t show any difference. That confusion can be further amplified when websites that don’t label themselves as satire take the articles for themselves.

And as members of the news media work on new ways to combat disinformation, those spreading the falsities are copying their strategies.

Credit: VERIFY
An example of a site that took the article without labeling it as satire.

WHAT WE FOUND AND WHY IT MATTERS

The “About” page for Freedom Fictions and the source of the original article are the same.

The text of the article itself repeatedly says that it’s untrue and a work of satire despite the headline suggesting otherwise. Anyone initially fooled by the headline would find out that the story is not actually true if they read the article itself. They wouldn’t even have to read the whole story, as merely clicking on the link to the article and looking at the website’s header reveals a satire label.

That’s the first step to avoid being fooled by misinformation: read past the headline. Headlines can be misleading in a number of ways. The content of the article can be unrelated to the headline entirely, or, in the case of this article, can contradict the headline.

When it comes to making sure fact-checks are indeed real, one thing to keep an eye on is sourcing. Most credible fact-checks cite sources of some kind, and many, VERIFY included, link to their sources directly where they can.

In most cases, you should be able to follow the links or search for the fact-check’s sources online and get the same conclusions as the fact-checkers did. If they don’t list any sources, you have reason to be skeptical.

If the fact-check uses a person or group they contacted as their source, there should either be an obvious or a stated reason why they’re credible. The reasons for using the Centers for Disease Control and Prevention, or CDC, as a source for a fact-check on an illness should be obvious. If they cite a doctor for the same fact-check, that doctor’s field of medical expertise should be stated somewhere in the fact-check. Furthermore, if you were to contact that same person or group, they should say something similar to what they said in the fact-check.

In the case of this supposed fact-check on Pelosi, there were no sources--which is no surprise given the text of the article stated they themselves made it up. However, not every distributor of false information is going to be so upfront about the truthfulness of their content. It’s a good idea to keep this in mind when exposed to a fact-check from a source you’re not familiar with.