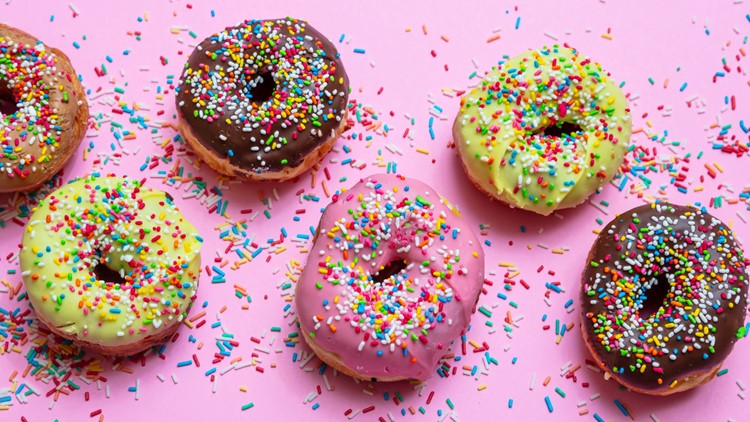 VERIFY: Do 6 doughnuts really have the same amount of sugar that's in one bottle of soda?

You have a sweet tooth. But should you go for both the doughnuts and a fully sugared soft drink? Our Verify team checked out the claim in this viral tweet.
Author: Rhea Titus
Published: 3:19 PM CDT June 7, 2019
Updated: 5:28 PM CDT June 7, 2019

For all you sugar lovers, a viral tweet with more than 16,000 likes and 5,000 retweets displays a bottle of soda, saying it has the same amount of sugar in six doughnuts.

The comparison is alarming: Six doughnuts have the same amount of sugar as one large bottle of a non diet soft drink? Does that math really add up?

To figure it out, our researchers first did some digging on the image of the bottle that claims 65 grams of sugar are in a 20-ounce soda pop.

That's actually the confirmed sugar content of a 20-ounce serving of Coca-Cola Classic, according to The Coca-Cola Co.'s published nutritional data.

For the doughnut side of things, we checked out the ever-so-popular Krispy Kreme for reference.

So yeah, six of those donuts exceed a 20-ounce Coke Classic.

Those metrics add up for those two specific brands, but does this math apply for all doughnut and soda flavors?

To find out, we spoke to Stephanie Mull, a registered dietitian at the Milken Institute School of Public Health's Weight Management and Human Performance Laboratory at the George Washington University.

She told us that size matters.

For example, a glazed grocery-store doughnut has about 20 grams of sugar. That would mean you'd have to eat to eat three donuts to get about the same amount of sugar as you would from drinking an entire bottle of regular soda.

So we can verify, yes, that post is right about all the sugar in this case. But it's oversimplified; one size doesn't fit all.

The calorie and nutrient content of donuts can vary widely. The nutritional content of fruit juices and sugar-sweetened beverages, also seen in the viral tweet, also varies.