VERIFY: Wastewater injection well may have leaked undetected for years in West Texas

Using satellites, a team of scientists from SMU found a bump growing in the earth and determined toxic water was leaking below. 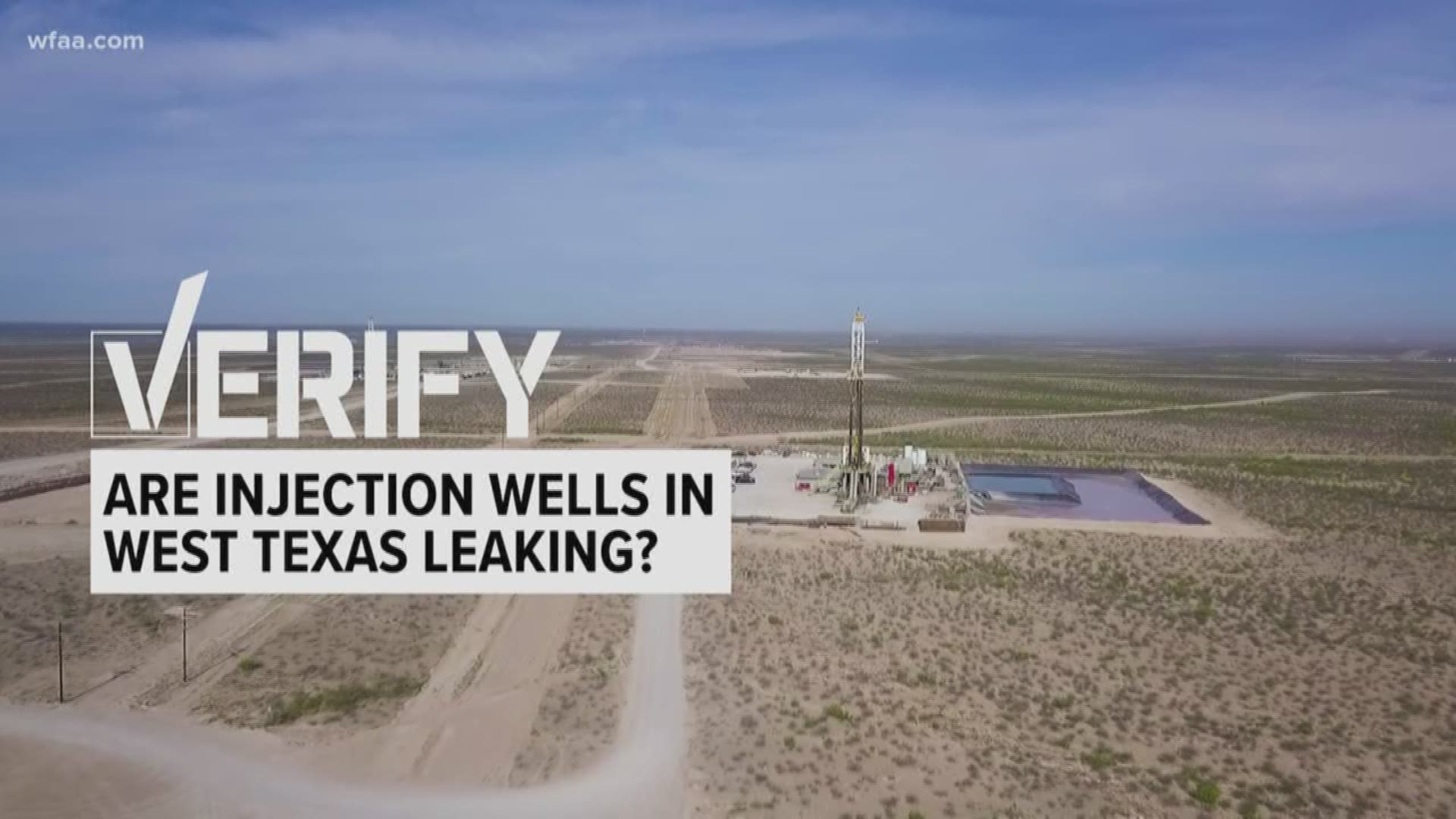 DALLAS — A wastewater well, used in hydraulic fracturing, may have leaked, undetected, for years, according to a new study from Southern Methodist University in the journal Nature.

A team, led by geophysicist Zhong Lu, used satellite imagery to identify the site and conclude it had leaked over the course of 4 years, between 2007 and 2011, possibly polluting a rural water supply used for agricultural purposes.

The injection well, in northern Reeves County, is currently inactive.

In 2018, Zhong used the same satellite technology in a study that showed how sinkholes in West Texas are rapidly expanding.

The new research shows a bump forming in the earth around the time the injection well was in heavy use. The bump, or uplift, is about 5-and-a-half football fields across but just 7-and-half inches high.

Lu says the bump, which can be detected from space using satellites, was caused by an underground leak of wastewater.

“How confident are you that you have identified an injection well leak?” I asked Lu.

“We are very confident,” he said.

Toxic wastewater is generated during the hydraulic fracturing process for oil and gas. That wastewater is pumped underground and permanently stored in, what’s called, an injection well so that it will not contaminate underground drinking water.

Lu’s paper shows, from 2007 to 2011, a growing volume of wastewater was injected underground. At the same time, satellite measurements show a correlation with the earth lifting at the well site.

“You pulled all the records of how much water was injected?" I asked.

“Then referenced that against your [satellite] pictures. What did that show?” I asked.

“That showed the uplift,” said Lu.

“The more water, the more uplift?” I asked.

He also found a correlation between the uplift and the amount of dissolved sodium in a nearby water well drawing from the Rustler Aquifer.  When a water well gets saltier that can mean that wastewater has leaked into the water table.

Zac Hildenbrand is an independent consultant who works with oil and gas drillers to reduce their environmental impact and has reviewed Lu’s research paper.

“How polluted is that water that we're putting back into the earth?” I asked Hildenbrand.

“This is absolutely great technology that we can scan across the energy landscape of Texas. For example, very quickly then identify where there are issues,” he said.

The regulator here is the Texas Railroad Commission. In response to these new findings, a spokesperson writes, "the academic paper you reference is a hypothesis… and not evidence that a leak is occurring."

However, the state can't say the well has never leaked because it appears regulators did not check during the period of 2007-11.

Inspection records, provided to WFAA by the TRRC, show inspectors left blank a checklist item called "Pressure on Bradenhead." The commission says a check of pressure on Bradenhead, which was not performed, is how it would identify underground leaks.

Lu says he hopes regulators, like the Texas Railroad Commission, will one day show interest in the science he's developed and use it as an early warning system to detect toxic leaks.

“We can really incorporate those technologies into the energy industry so we can make sure nothing can go wrong,” Lu said.

A TRRC inspector visited the well as recently as September and found no evidence of an underground leak. Because of that, it’s been deemed a low-risk priority.

Clarification: Following the publication of this story, the Texas Railroad Commission shared additional information regarding their inspection process. The Commission says even when an item is not checked-off on an inspection checklist it should still be presumed that item was inspected. When asked, the Commission did not provide documentation that supports this procedure.