No, wind and solar power are not the main causes of Texas' power outages despite Gov. Abbott's claim on Fox News | VERIFY

Prior to his interview with conservative talk show host Sean Hannity, Gov. Abbott told WFAA that the main problem was natural gas being frozen in the lines. 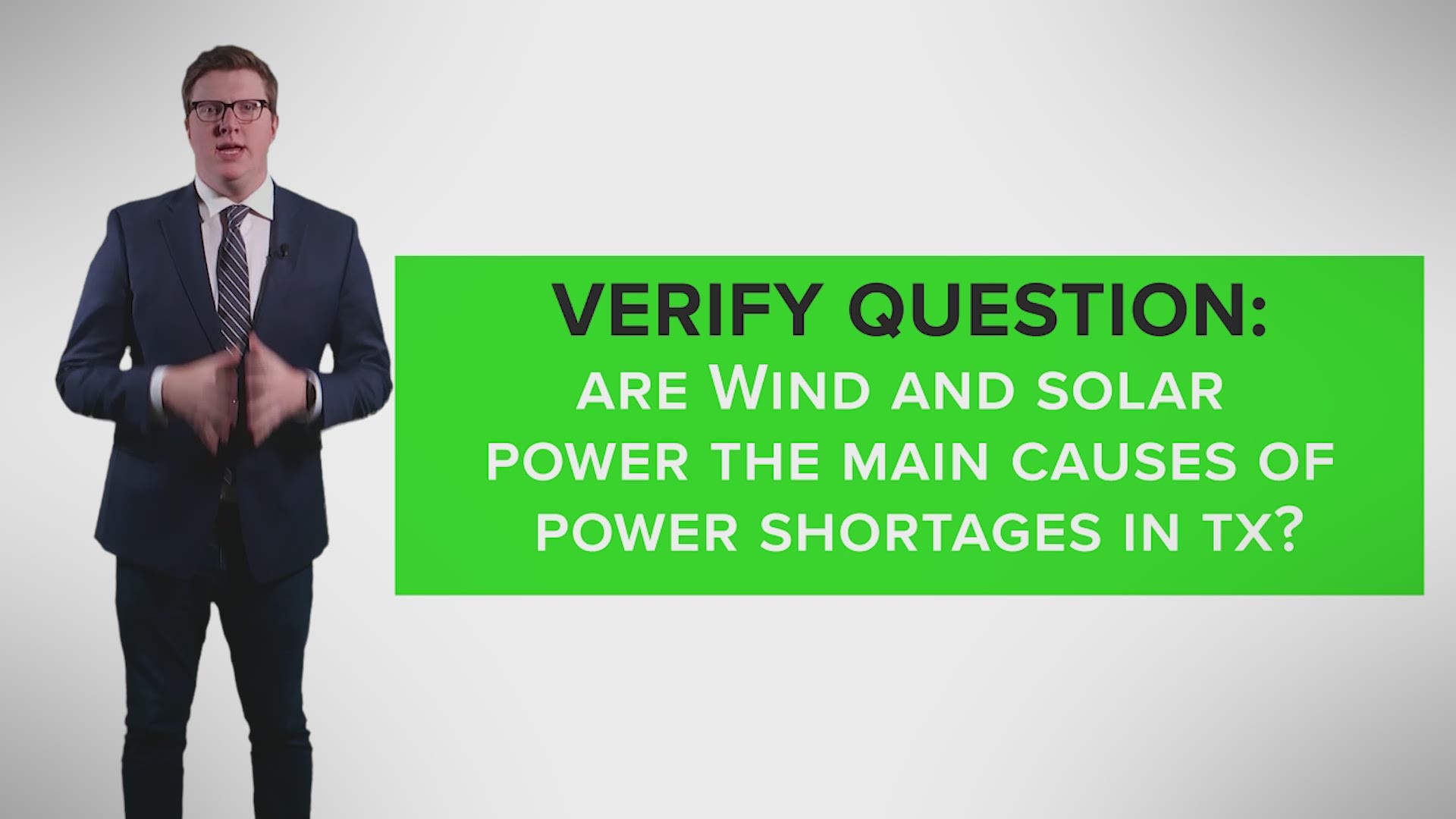 DALLAS — CLAIM: Are frozen wind turbines the main cause of Texas’s power outages?

This claim is false.

In an interview with Fox News’s Sean Hannity on Tuesday, Texas Governor Greg Abbott criticized calls for a Green New Deal climate change policy saying wind turbines and solar power “thrust Texas into a situation where it was lacking power in a statewide basis.”

Texas Gov. Abbott blames solar and wind for the blackouts in his state and says "this shows how the Green New Deal would be a deadly deal for the United States of America" pic.twitter.com/YfVwa3YRZQ

However, in an interview with WFAA prior to his appearance on Fox News, Gov. Abbott explained a significant reason why the state isn’t generating enough power is due to natural gas.

On Monday, Gov. Abbott tweeted about the issue, as well, and did not mention wind power or solar power as significant causes of the lack of power generation.

The Texas power grid has not been compromised.

The ability of some companies that generate the power has been frozen.

They are working to get generation back on line.

“The ability of some companies that generate the power has been frozen. This includes the natural gas & coal generators,” his tweet read in part.

During a media call on Wednesday, ERCOT did not directly blame wind after Gov. @GregAbbott_TX made that claim last night.

"In different ways, the very cold weather has impacted every type of generator," said Dan Woodfin, a senior director at ERCOT.

During that news conference, Gov. Abbott was asked about his claim that wind and solar power generation "thrust" Texas into power outages.

"Over the past 24 to 48 hours, I've conducted about two dozen or more interviews. I have repeatedly talked about how every source of power the state of Texas has, has been compromised," Gov. Abbott said.

"What I made clear is that if we rely solely upon green energy, that would be a challenge. But, in Texas, we do not rely solely on green energy," Gov. Abbott said. He did not address why he blamed wind and solar generation as the main causes of the current power outages in his interview with Sean Hannity.

Earlier in the week, during a media call on Tuesday, ERCOT's Woodfin explained the main source of the power generation problem was due to natural gas.

“It appears that a lot of the generation that has gone offline today has been primarily due to the issues on the natural gas system.”

ERCOT CEO Bill Magness told WFAA’s Jason Whitely that the loss of power generation has been challenged in a variety of resource types.

“The supply side of the equation has been challenged, too, whether wind turbines froze or natural gas supplies that got tight or solar farms that really couldn’t produce because of the cloud cover and snow,” Magness said.

But, the amount of power generated by wind and solar in Texas is far less than what’s supplied by natural gas, coal, and some nuclear power.

In ERCOT’s annual forecast released in November, ERCOT said nearly 83,000 megawatts of capacity was expected to be available this winter, including 928 megawatts from winter-rated wind power and 35 megawatts from solar power.

In a separate Winter Summary published on December 16, 2020, ERCOT listed 6,204 megawatts of power capacity for combined wind sources. Total capacity for all sources was listed as 84,966 megawatts.

WFAA emailed Gov. Abbott’s office on Wednesday morning to ask why the Governor shared misinformation in his interview with Fox News. The Governor’s office has not responded to our email.