Yes, the lumber shortage is real

Videos shared on TikTok recently claim the lumber shortage was created to boost profits in the lumber industry. 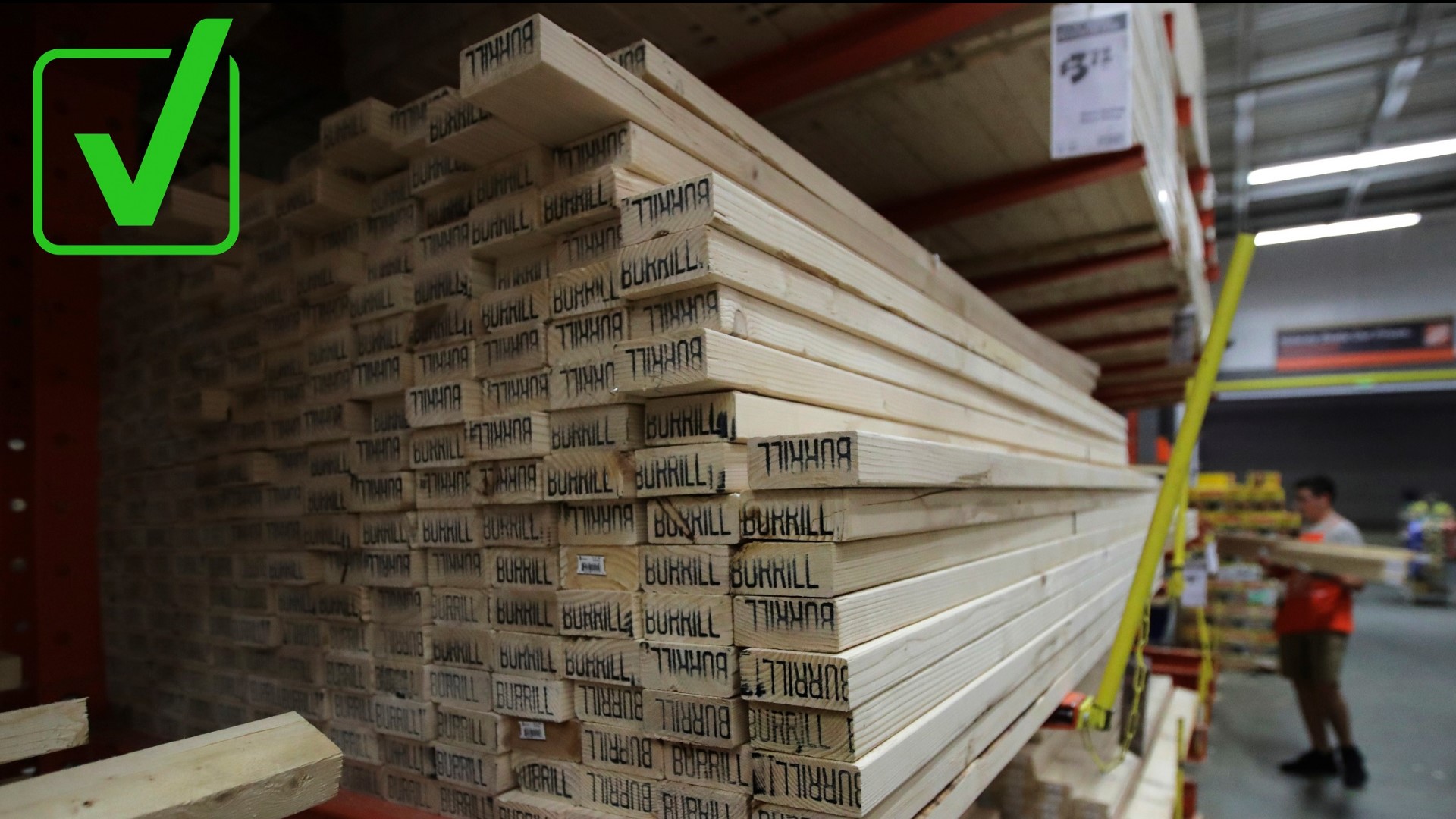 From toilet paper to flour, the COVID-19 pandemic has caused a number of product shortages in the United States since its onset in early 2020.

Recently, on TikTok, there have been a series of videos shared from people at lumber yards across the country claiming that the widely-reported lumber shortage is fake and was created to boost profits in the lumber industry.

Is the lumber shortage real?

Yes, the lumber shortage is real.

According to the National Association of Home Builders (NAHB), the lumber industry is experiencing a crisis due to the pandemic, which is causing a supply shortage and lumber prices to surge nationwide. On its website, the trade association says the “escalating lumber prices are largely due to insufficient domestic production and extremely large lumber mill curtailments that lasted well into the 2020 building season.”

Laura Raynor-Williams of Kluttz Lumber Company, a family-owned business that has served the Charlotte, North Carolina, area for over 85 years, told VERIFY that the pandemic has had a major impact on the lumber industry.

“When the pandemic started, we weren't prepared. No one was prepared. No one was out there shouting from the street corners, ‘Hey, there's a pandemic about to start! Buy your lumber now!’ And so, no one was ready. The infrastructure just was not there,” said Raynor-Williams. “We ran out of masks, we ran out of hand sanitizer, we ran out of lumber, because the production just wasn't ramped up to the level it needed to be for the amount of demand that there was, and so, since then, we've been playing catch up now or trying to play catch up for over a year now and we're still running into issues.”

Judd Johnson is an editor at Hardwood Market Report (HMR), a weekly publication that has delivered benchmark pricing and market commentary on North American hardwood lumber and the hardwood products industry since 1922. He told VERIFY by email, “It is our view from daily analysis that lumber supply shortages exist.”

Johnson says the public and many media outlets often refer to “softwood lumber” as simply “lumber,” however, he makes it clear that the term is not all-encompassing.

“The data we create and develop involve hardwoods and forces that influence business for hardwoods,” said Johnson. “All of that said, I do know there are shortages of softwood lumber, just as I know there are shortages of essentially all commodities. Part of this stems from the pandemic, but there were market forces preceding the pandemic that set back both hardwood and softwood lumber production capacity utilization and even production capacity.”

Raynor-Williams says the shortage is affecting multiple industries, including home improvement and homebuilding. Since April 2020, Gerald Howard, the chief executive officer of the NAHB, tells VERIFY the surge in lumber prices has added nearly $36,000 to the average price of building a new single-family home.

“What that means is for people at the high end of the market, the builders will put an escalator clause in the contract. In other words, saying, ‘I think your lumber is going to cost this, but it could cost that,’ and the higher end of the market, people can simply say ‘yes’ or ‘no.’ At the lower end of the market, it prices a lot of first-time homebuyers [and] first-generation buyers out of the market. So builders are not pre-selling housing anymore because they don't know when they're going to be able to make it work financially,” said Howard. “Builders are, in some instances, if they're building a spec house, they'll lay the foundation and then just not frame the house because they don't want to pay the prices for the lumber right now, in essence, they're using everything they can creative to address the problem. But in the end, as long as prices stay this high, the consumers are going to end up bearing the brunt of it.”

When asked about the TikTok videos claiming that the lumber shortage is fake and to boost profits for the lumber industry, Raynor-Williams says, “Just because you can see the lumber does not mean that there is not a shortage.”

“We're not trying to swindle anybody, the prices have gone up, and at this point, it's a waiting game to see when they're going to go back down again. But right now it's not looking like it's going to happen this year. So we're trying our hardest, and as soon as we can get those prices inched down, we're inching right down with them,” she continued. “We are definitely not overcharging for the sake of overcharging or trying to gouge the customers because we want you guys to be able to buy the materials and to use it and to have a good quality product and that's the most important thing to us, not necessarily the bottom line.”

According to Howard, Commerce Secretary Gina Raimondo acknowledged the issues surrounding lumber and promised to take action in a recent meeting with the NAHB.

"We're hoping that the administration is going to take action sooner rather than later," said Howard.

VERIFY
Our journalists work to separate fact from fiction so that you can understand what is true and false online. Please consider subscribing to our daily newsletter, text alerts and our YouTube channel.  You can also follow us on Snapchat, Twitter, Instagram or Facebook.