William McCall Calhoun Jr., was arrested Jan. 15 and charged with his participation in the riot. 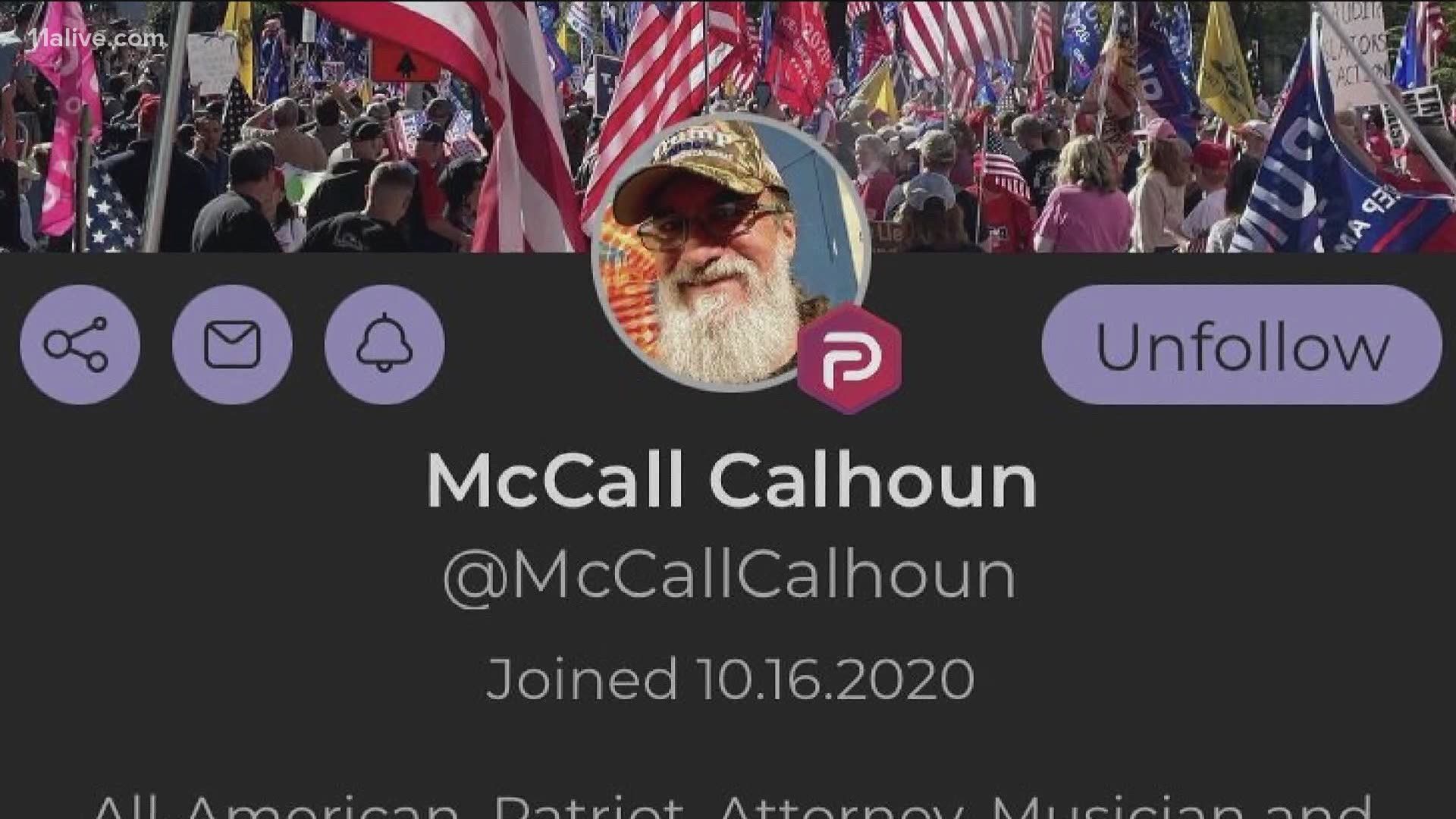 AMERICUS, Ga. — Court documents reveal more of what led to the arrest of an Americus, Ga. attorney following the riot at the U.S. Capitol earlier this month.

William McCall Calhoun Jr., was arrested Jan. 15 and charged with entering restricted Building or Grounds; Violent Entry or Disorderly Conduct; Tampering With a Witness, Victim, or an Informant.

Calhoun's use of social media is how the Federal Bureau of Investigation was alerted to him. According to an affidavit filed by the FBI agent assigned to the case, a concerned citizen called and was able to provide information he shared on Facebook, Twitter and Parler. They said he was an attorney in town.

The State Bar of Georgia has a record of someone with the same name in Americus who is an active member and practices criminal and insurance law.

The caller read some of the posts, which threatened the lives of Democrats "being shot on site" stating that they are "going to kill every last communist who stands in Trump's way," according to the documents.

(Story continues below copy of affidavit)

The FBI found, according to the affidavit, that Calhoun traveled to D.C. on Jan. 6 to protest what he believed to be fraud in the 2020 presidential election and planned to "storm" the Capitol. He announced his intent to be there in a post on Dec. 29 on Parler.

"We the people have no other realistic option to communicate our unwavering intent to demand fair elections now and forever – or else. I’ll see you there," the document states.

RELATED: Here's who has been federally charged in the US Capitol riots

On Jan. 5 he posted that he was heading to the Capitol, according to screen captures of the social media posts.

“Headed to D.C. to give the GOP some back bone – to let them know this is their last chance to Stop The Steal – or they are going to have bigger problems than these coddled Antifa burning down their safe spaces."

The next day, on Facebook, he shared a photo of the Capitol from the rally and said, "We're going to get inside the Capitol before this ends."

He provided an update to Facebook that they made it inside and they "physically owned the Capitol."

He bragged in the post that he was among the “the first of us who got upstairs kicked in Nancy Pelosi’s office door and pushed down the hall toward her inner sanctum” and that if the Speaker was around, she "probably would have been torn into little pieces."

He explains that they pushed through the police barricades, entered the building, began yelling names and "stormed upstairs ... looking for members of Congress."

In his next post, that same day, Calhoun wrote on Facebook that the "American People proved that we have the power."

"We physically took control of the Capitol Building in a hand to hand hostile takeover," he wrote. "We occupied the Capitol and shut down the Government – we shut down their stolen election shenanigans.”

This affidavit, signed on Jan. 12, led to arrest warrants for Calhoun. He was taken into custody on the 15th. According to WALB, he had his first appearance in court that same day. They said Calhoun will remain in custody and is currently scheduled to have his detention and preliminary hearing this week.