We are reflecting on the day that changed our community forever. 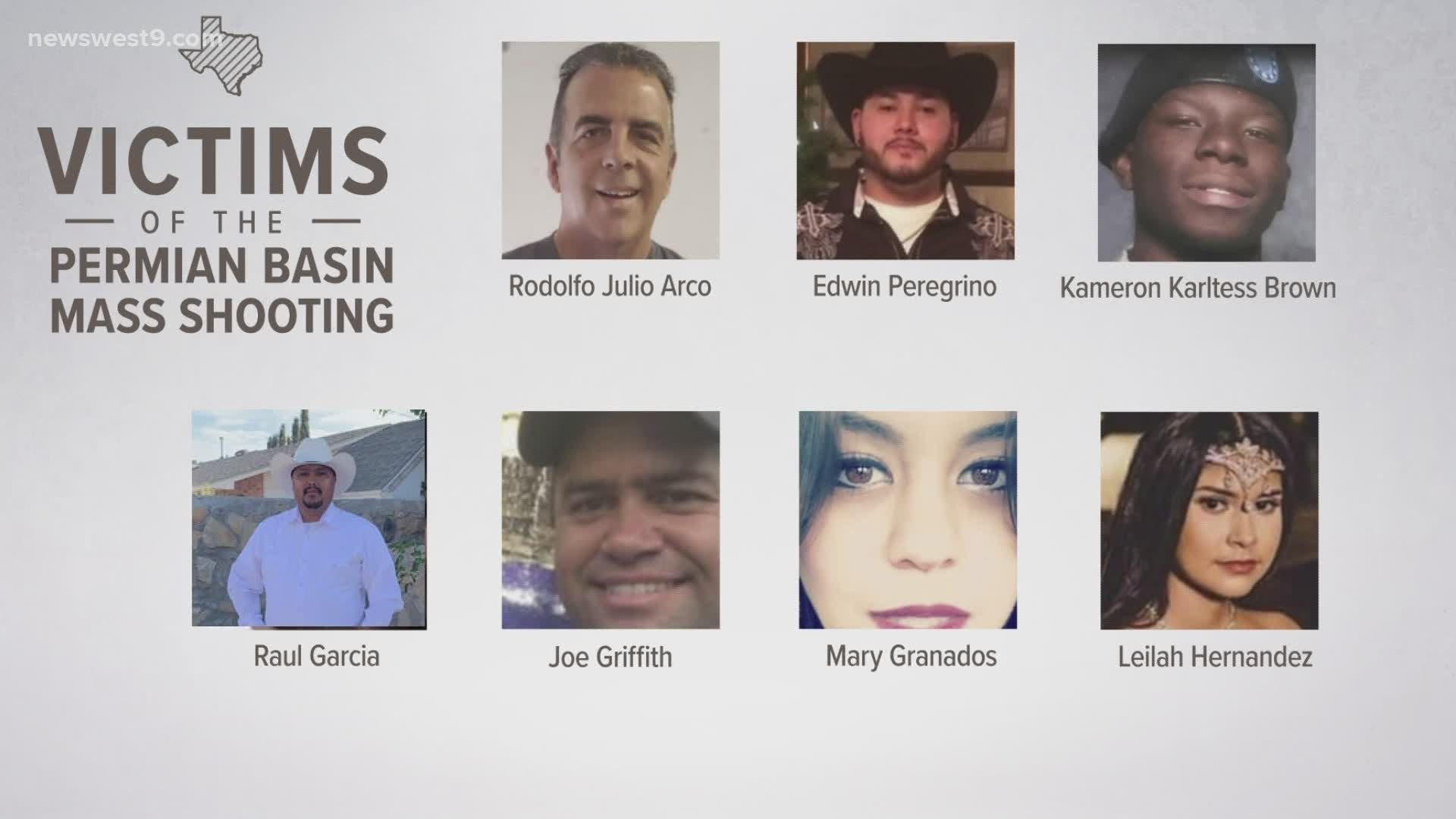 ODESSA, Texas — It's been one year since the mobile mass shooting that shocked the Permian Basin during Labor Day weekend.

The destruction is cleared out and the injured have recovered, but the families of those lost on August 31, 2019, are forever changed.

Here is a look at the victims and the lives they lived before that day.

Mary Granados, 29, was delivering mail on her United States Postal Service route when she was killed.

Born in Mexico, Granados’ family moved to the U.S. when she was 14. She had attended Permian High School with her twin sister Rosie Granados.

Doorbell camera footage shows Granados smiling as she delivered the mail on August 31. Granados was on the phone with Rosie when she died.

Leslie Aide, a family friend, created a GoFundMe page on behalf of the family. She described Granados as “beautiful inside and out, with a great heart and always ready to be a friend, always had a smile on her face.”

In December 2019, Jesse Castaneda created an ornament prayer-wall for the Odessa community. Castaneda, who is also a postal worker in Odessa, put the first ornament on the wall honoring Granados.

He asked the person who trained Granados at USPS to write the prayer.

"Father we pray for Mary Granados. For eternal rest, may her soul through the mercy of God rest in peace. We pray for her family. Cover them with your wings of love and rest their weary hearts. Let their minds sound sleep. We ask all this in your precious name, in the name of Jesus amen," said Castaneda.

Leilah Eliana Hernandez, 15, was the youngest victim killed in the shooting.

She was exiting a car dealership with her brother, Nathan, who had just purchased a new vehicle when she was shot and her brother injured.

Hernandez was born in Fort Stockton and lived in Odessa with her mother, step-father and three brothers, according to her obituary.

She was a sophomore at Odessa High School and had just celebrated her quinceañera in May. She played basketball and volleyball and was devoted to St. Mary’s Catholic Church, her obituary states.

Yasmine Natera, Hernandez’s best friend, said at the funeral that she will miss Hernandez’s kindness.

Cross Adams, a Compass Academy Charter School art teacher, had taught Hernandez. He described her as a “sweet girl” who was artistic, creative and very polite.

Adams honored Hernandez by creating a portrait for her family.

Kameron Brown, 30, was found shot in his pickup truck near Ratliff Stadium in Odessa. His brother Carlton Brown said he was on his way to work.

Brown played football and ran track at Coleman High School. He joined the Army right after high school and was sent to Afghanistan where Carlton told the Odessa American Brown “saw a lot of people die.”

Brown suffered with Post Traumatic Stress Disorder when he left the Army. When he got to a good place with his mental health, Brown’s brother suggested he get a job in the oilfield.

Brown landed a job at Standard Safety and Supply and worked there for over a year.

In his obituary, his family described Brown as “one of God’s brightest lights that had ever shined in this world.”

“He was full of life and very confident in who he was as a person. He brought joy and laughter to all that knew him, and who were graced to be in his presence. His light will forever shine on in our hearts and minds,” the obituary said.

Brown’s co-workers, family and friends created a memorial for Brown placed just outside the stadium.

“To my brother Kameron, I love you, I’ll always miss you, I know you’ll always be with me. You’re the reason why I am as strong as I am today. I believe that this didn’t happen in vain. I think you’re the thing that changed the world. Everybody that this happened to, y’all are all something special and all something that changed this world, and I’m grateful for that," said Carlton Brown.

Edwin Peregrino, 25, had just moved to San Antonio from Odessa two weeks before August 31, but came back to visit family for the Labor Day weekend.

Bianca Peregrino, Peregrino’s sister-in-law, created a GoFundMe on behalf of the family.

“Edwin … was so full of life! Every room he walked in he always had that room lit up with a smile and laugh. He made a difference in every soul he met, he made a mark,” said Bianca in the GoFundMe page.

Rodolfo Julio Arco, 57, was killed on his way home from work in August 31.

Arco’s sister, Maria, told USAToday that he had moved to Odessa from Las Vegas after the 2017 mass shooting at a music festival. She said that Arco believed it would be safer in West Texas.

The family moved to the United States from Cuba in 1969, Maria said.

His sister described Acro as loving and joyous. “He enjoyed life,” she told USAToday.

Arco was a father and owned a trucking business in Odessa.

Credit: Ana Garcia
Raul Garcia is one of the seven victims killed in the Odessa mobile mass shooting on Aug. 31, 2019.

Raul Garcia, 35, of El Paso, was driving from the East Coast to San Diego when he decided to take a detour through the Permian Basin to pick up his sons to join him, according to the El Paso Times.

He was killed while driving through Midland-Odessa on August 31.

Garcia had grown up traveling with his truck-driver father during the summer and would often take his sons on trips too.

Monica Romero, Garcia’s friend, told the El Paso Times that he loved traveling and exploring. “ his kids and his truck meant everything to him,” Romero said.

Garcia leaves behind a wife and four kids.

“Raul, was a truck driver and that was his life, he had a big heart always reaching out and helping whoever needed it all the time,” stated a Facebook fundraiser created for Garcia’s family.

Joseph “Joe” Griffith, 40, was killed while sitting at a traffic light with his wife and kids, his sister Carla Byrne told the Washington Post.

Byrne remembers her brother for his sense of humor, his uncanny ability to impersonate anyone and his devotion to his wife Becky, his junior high crush.

Griffith was born and raised in Odessa. He graduated from Odessa High School in 1997 and then from the University of Texas Permian Basin in 2001, according to his obituary.

“Joe was incredibly gifted and talented. He believed every part of his life and abilities were given by God to be used for His glory. And Joe was faithful to do just that,” the obituary said.

His obituary also describes Griffith as loyal, protective and loving. He leaves behind two children.

“They weren't able to stop the bad guy with a gun this time until he murdered my brother and I don't want this to happen again, please do not let him die in vain," said Askins. 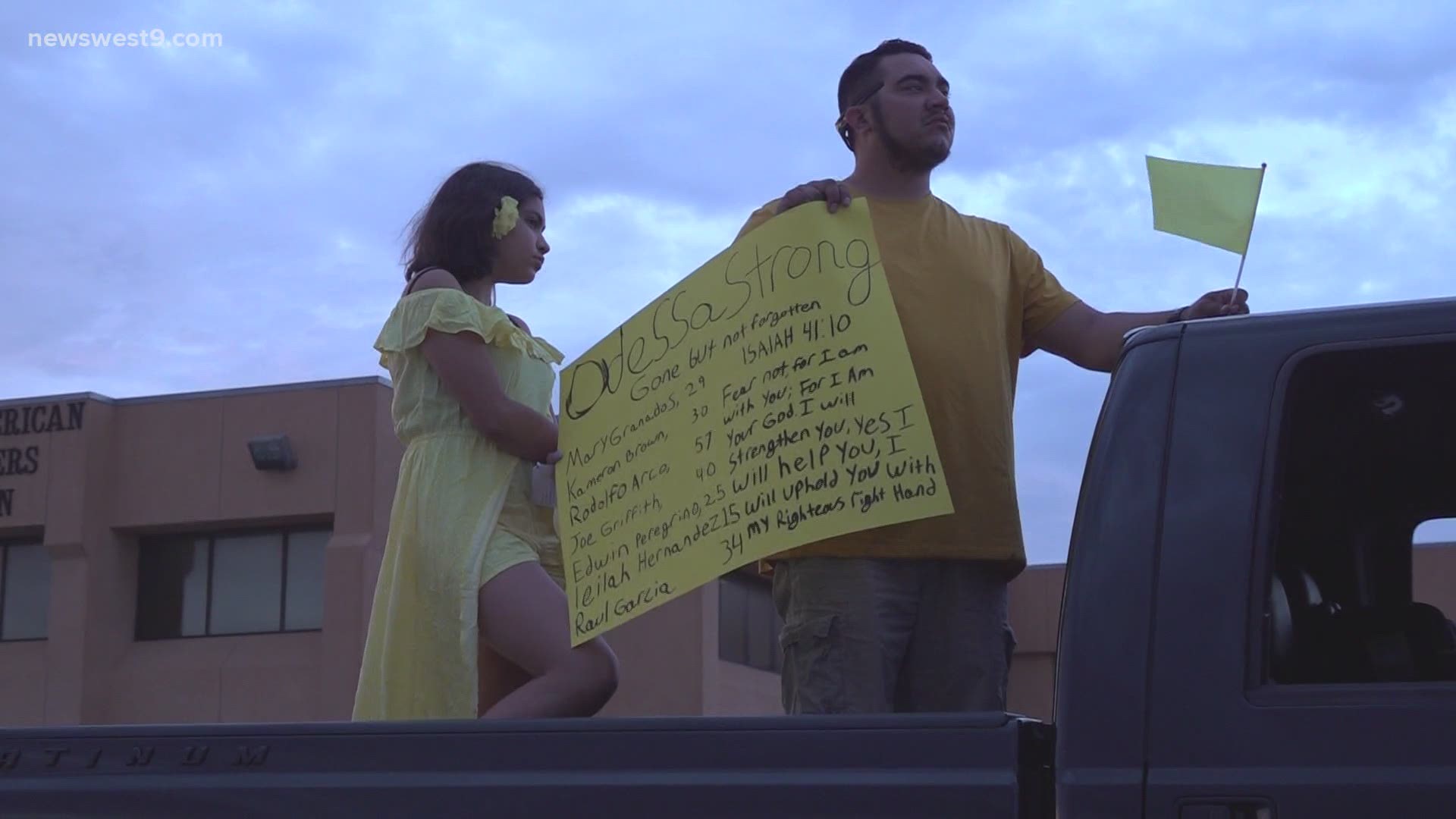 Prayer service held for victims of mass shooting on anniversary