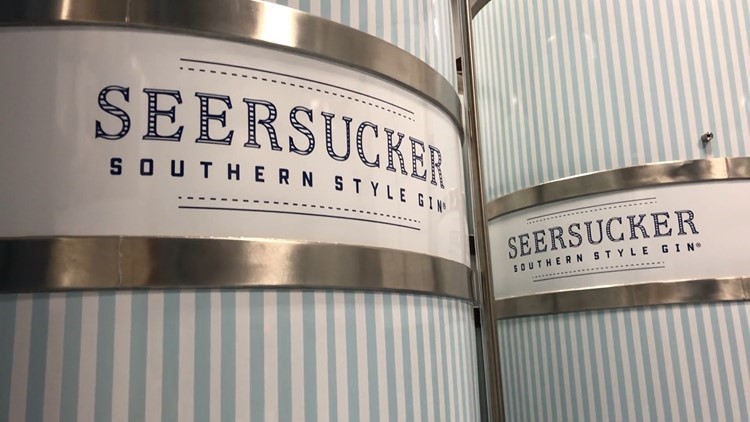 KENS 5 first stopped by the distillery during San Antonio Fashion Week. The gin distillery served as a venue for an exclusive SAFW event and rightfully so.

Driving up to the distillery, you are immediately transported away from San Antonio and immersed into a country chic atmosphere.

The venue, with its large building adorned in robin egg blue and white, screams “Welcome In!” From the patio chairs out front and a green field complete with cornhole games and a bocce ball set, guests feel as though they are visiting a family friend rather than an industrial gin distillery.

And that’s exactly how Trey and Kim Azar, the founders of Azar Family Brands, want you to feel.

“There’s nothing better than the idea of southern hospitality. And so, with Seersucker you have the whole history of garden parties and back porch swings, [and] lake life.” Trey explains.

The Seersucker Gin Distillery is split between an indoor space that includes a gift shop with a sign that reads “Seersucker- Welcome Home” and a full bar that offers a 360-degree view of the place where all the magic happens—the distillery.

“We built this distillery in 2010. We started making Cinco Vodka in 2011. We’ve been making it here since then. And then we launched our second brand—Seersucker Southern Style Gin in 2017.”

Following the launch of Seersucker, which gained instant popularity (the brand is now available in 13 states), the Azars decided to remodel the facility, originally built for manufacturing.

“We wanted to give them an experience to come out to the distillery… have a really good Seersucker cocktail.”

Anyone who talks with the Azars can tell that they take a lot of pride in their work.

Trey, the founder and Master Distiller at Seersucker, grew up in the alcohol industry. His grandfather was a Coors Beer distributor (the first in Texas after World War II) as was his son, Trey’s father.

After college, Trey decided to jump straight into the industry, working for a wine and spirits distributor as a fine wine salesperson.

And while he enjoyed the experience, he yearned for more.

“I always knew that I wanted to create my own spirit brands and come up with my own recipes and push them out into the world.”

The Azars’ first brand is named after Trey and Kim’s children.

The endeavor began with the goal to “make a really nice slow copper pot distilled vodka that just had a better taste profile and was cleaner than other vodkas in the market.”

After experiencing success with Cinco, the Azars decided to expand to gin. While they were working with a different liquor, the focus was the same: create a better taste profile for consumers.

“Seersucker was an opportunity in the gin category to make gin that was more appealing to younger people with a different taste profile than other gins.”

Trey refers to Seersucker as a “southern style gin” complete with its own unique taste that has flavors of citrus, honey, and mint rather than the classic “pine or Christmas tree” taste.

In addition to churning out the Seersucker gin itself, Trey went a step further by creating flavors that meld the southern style gin with real juice.

The goal, Trey shared, is to give customers “a shortcut to a cocktail in a bottle.”

“All you have to do is take the Seersucker flavors, some ice in a cup, pour it in a glass, put a splash of Topo Chico or club soda on it and you’ve got a cocktail that’s absolutely ready to go and delicious, with real ingredients.”

The Azars hope that Seersucker will appeal to a younger demographic, particularly women, who Trey feels “somewhat intimidated by the gin category.”

“We wanted to make gin more friendly, and appealing and inviting to the consumer.”

From the enthusiastic looks of the crowd sipping on their Seersucker flavored cocktails at the SAFW event, that’s exactly what the Azars are doing.

As for what’s next for the brand?

“Our intention is to grow the Seersucker brand into all 50 states in the U.S and ultimately, take the brand international.”

Additionally, a new Seersucker flavor will be launched in 2020 or 2021.