One major missing link in the supply chain: Workers

One expert said the U.S. government and American businesses need to start re-thinking how our supply chain is set-up in the first place. 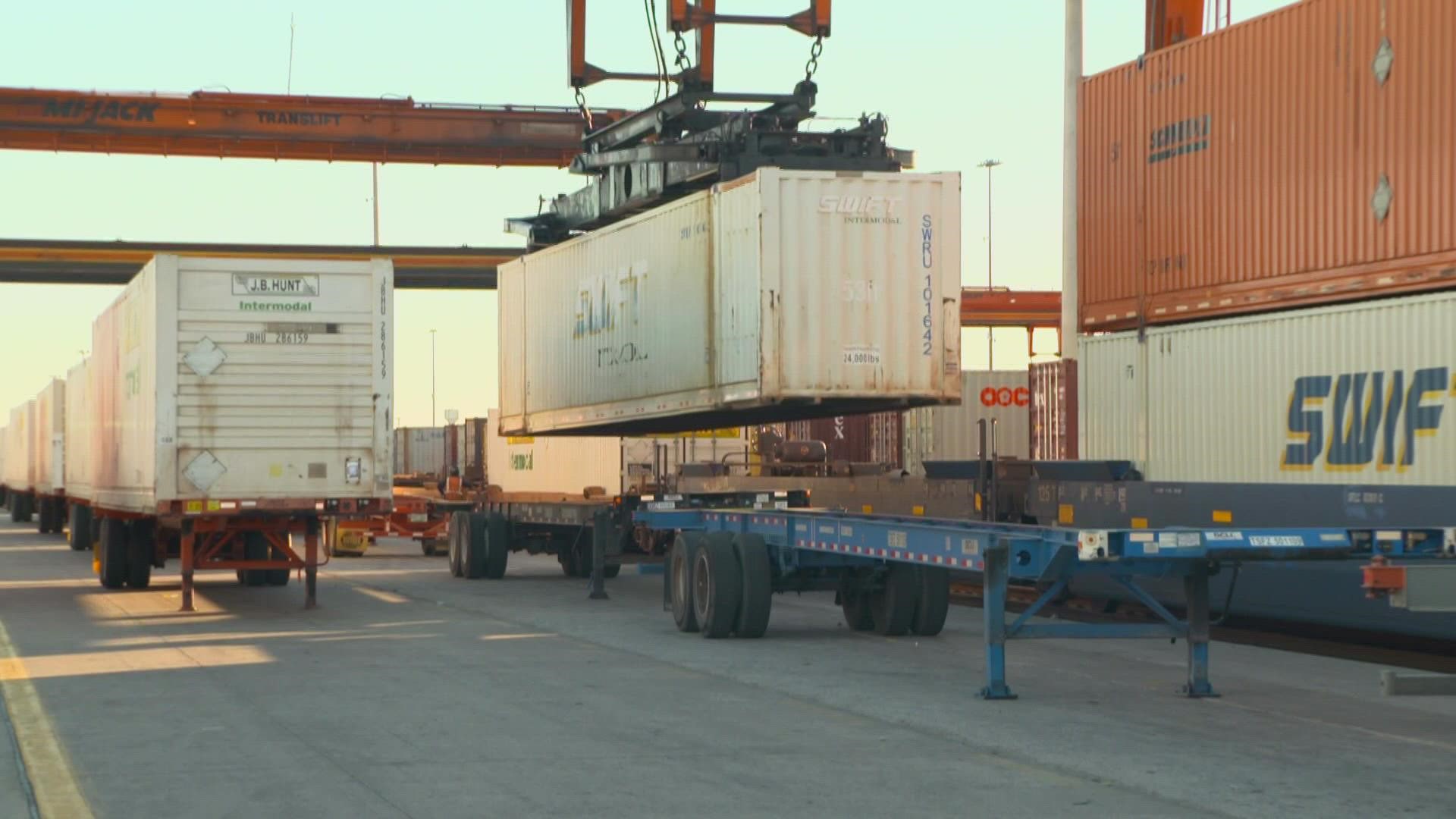 DALLAS — If you’re waiting for the supply chain to return to normal, stop holding your breath. This is the new abnormal in Texas, and if you think the holidays are bad this year, the problems could persist through next Christmas.

“I think the reality of the situation is that it's going to take another 12 to 18 months for our economy and the global economy to approach a new normal,” Professor Margaret Kidd said on the latest episode of Y’all-itics.

Kidd is an expert on supply chain and logistics technology and teaches the subject at the University of Houston. She said part of the problem is… us. Consumers are contributing to the supply chain crunch because they’re spending so much money.

“We have consumers spending record amounts of money on e-commerce and at the mall, and, you know, that was made available from savings, surplus savings, folks working at home, not commuting, not going on vacations,” Kidd said. “We've been on a shopping holiday for almost two years.”

Aaron Armistead is a regional Vice President for NFI, which provides supply chain and logistical support for businesses of all types and sizes. He said that pent-up demand still has businesses behind, even though they’ve been trying to fix their inventories for about a year, when much of America started slowly trying to re-open.

“There was a need to restock inventories, and the retailers have never been able to catch up from that pandemic reopening, and now you've got a strong, rebounding economy,” Armistead explained. “There's just been no ability to catch up. And that goes from the container lines bringing the containers over, to the ports, to the railroad, to the trucking too.”

Listen to the latest episode of the podcast below:

Professor Kidd provided some numbers to put the sizzling hot market into perspective.

She said American consumers spent $638 billion in October, a significant increase year-over-year and also up from September. And Kidd said if you go back two years prior to the pandemic, e-commerce made up around 10% of all retail sales. That number has since jumped above 15% at times, a dramatic increase in a short period of time.

“So, with any kind of business, imagine your sales going up 57% and then, do you have the infrastructure to support those sales? And so, that's been part of the problem,” Kidd explained. “There is just an increased amount of spending, an enormous amount going into e-commerce.”

Kidd did not think the spending rate is sustainable and she said she thinks spending levels will return to a more normal level over the next six months.

In the meantime, if you’ve had trouble finding a specific product, it could be closer to you than you think. That’s because, in many cases, it’s not that goods aren’t available - it’s that there aren’t enough workers to move them.

“It could be on a ship parked off of the port of LA/Long Beach. It could be in a container stacked at a port location off of a ship. Or it could be in a warehouse,” Armistead listed. “One of our one of our industry partners, real estate industry partners, shared with us last week that there were 15 markets under 3% vacancy. And that the top two or three big ones were under 1% vacancy. So, there's just no place left to put anything.”

And on top of everything else right now, Texans are also suffering through red hot inflation. Professor Kidd said it’s the highest we’ve seen in more than 30 years as the Consumer Price Index (CPI) increased 0.9% in October after rising 0.4% in September. The U.S. Bureau of Labor Statistics said over the last year, the CPI is up 6.2%. That means consumers are paying more for everything, from food to vehicles. Kidd said don’t expect inflation to magically disappear anytime soon, either.

“I would look for prices decreasing over the next six to twelve months," she said. "Is it going to happen right away? No, absolutely not. But I think in the intermediate and long term, we're in much better shape than we are currently."

And if you’re looking for signs the supply chain crunch might be improving, Professor Kidd said look for vaccination rates to improve. She said the spread of COVID has shuttered many a warehouse and manufacturing facility, and it has severely disrupted the labor supply.

Professor Kidd also said the U.S. government and American businesses need to start re-thinking how our supply chain is set-up in the first place.

For instance, she said 40% of all containers from Asia enter our country through the Ports of Los Angeles and Long Beach, making it a natural bottleneck. Kidd said over the last decade, we’ve started to see some of that trade slide east to the Gulf Coast, such as the Port of Houston and Southeast Atlantic ports, such as the Port of Charleston.

She also said we’ll see more “nearshoring” in the U.S. in the coming years, which essentially means moving your manufacturing close to your borders, such as in Mexico or Canada.  She even predicted manufacturing returning to the U.S. itself, if wages don’t continue to be hindrance.

Aaron Armistead said businesses will have to figure out ways to work better together in the future to keep pressure off the supply chain.

Take the decision to keep ports open 24-hours, for instance. Just because they’re open doesn’t mean there will be a driver available to move the goods. Or if a driver is available, it doesn’t mean there’s a place to store the goods. Armistead said those are the types of interconnected relationships that must be ironed out because it’s a time of major crisis for many businesses.

“It's one thing to pay more to transport and solve a supply chain problem. It's another thing if you miss the sale entirely because your product never arrived,” Armistead said. “The upward cost pressure, I think, from all of this - set aside the lost sales that have occurred and some of the missed opportunity and empty shelves - if you're not there now, will people remember your brand name in the future?”

How will the infrastructure bill help the supply chain crunch?  Listen to the latest episode of Y’all-itics to find out.  And both of our experts let you know how much of their Christmas shopping they’ve done already in order to get ahead of this problem.  Cheers!