Can anything stop the voting legislation during the special session in Texas?

“If Democrats in Washington don't pass pre-clearance, they are leaving Democrats in Texas to defend the Alamo. Good luck.” 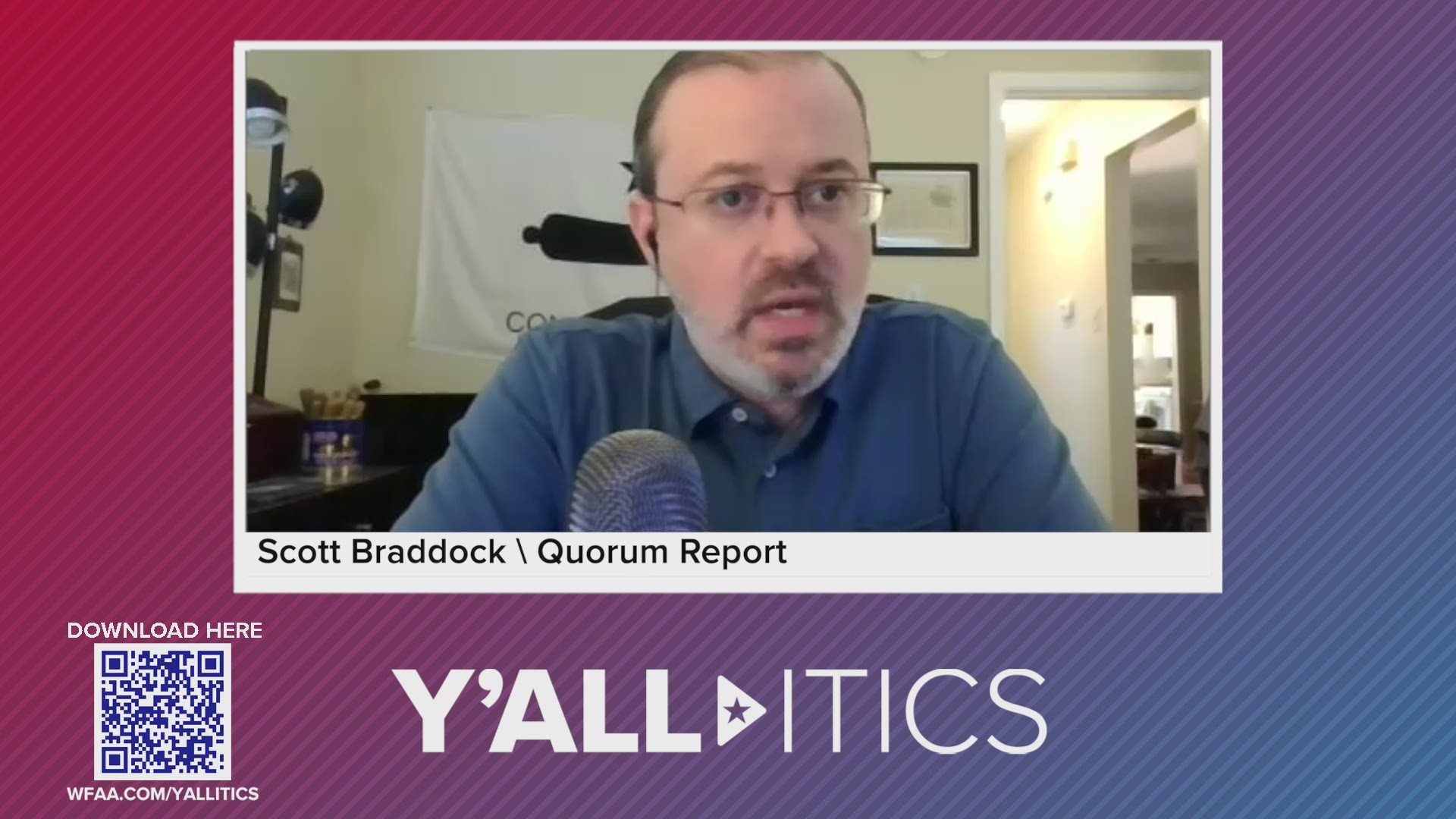 Texas lawmakers just learned what’s awaiting them in Austin when they return on July 8 for the 30-day special session.

While a GOP-backed voting bill is expected to be the primary issue, Gov. Greg Abbott shared a list of 11 priorities for lawmakers to focus on during the session.

Scott Braddock, the editor of The Quorum Report, said in a broader sense, you can expect one topic to be omnipresent.

Braddock is one of the most sourced reporters in the state capital. He said because of the potential for so many unresolved issues to be brought up, he thinks there could be as many as three or four special sessions this year. Republicans could take up anything and everything from banning the teaching of “Critical Race Theory” in classrooms to bail reform.

Lawmakers will also have to address the budget, since Abbott vetoed funding for the legislature as punishment after Democrats walked out of the House in the final hours of the regular session to kill the election bill.

Braddock said in some ways, Republicans may be getting in their own way because even they can’t agree on what some of the legislation should look like. And he said the governor learned his lesson after the last special session in 2017 and that will affect the look and feel of this special session.

To learn why the election bill lawmakers will consider during the 30-day special session likely won’t be as strict as the one that failed earlier this year, listen to the latest episode of Y’all-itics. Subscribe wherever you get your podcasts: Apple Podcasts | Spotify | Stitcher | Amazon Music

In terms of any voting legislation, Democrats have promised to keep all of their options on the table in an effort to defeat it once again.  But short of another walkout, do they have any leverage?  Braddock said it all depends on their counterparts in Washington, D.C.

“Big question: will the Democrats in Washington, where they have the majority, are they going to pass pre-clearance before any of those things happen in Texas, so that that process would be in place before any of these new election laws happen,” Braddock said.

Pre-clearance would require a state with a history of racial discrimination to gain pre-approval from the Justice Department before making any changes to its elections and voting laws. Texas was one such state. But the U.S. Supreme Court effectively ended pre-clearance in a 2013 ruling and that could have a big impact on Democrats in Texas.

“If Democrats in Washington don't pass pre-clearance, they are leaving Democrats in Texas to defend the Alamo. Good luck,” said Braddock.

CPAC is widely seen as the place for Republican candidates to introduce themselves to the conservative base. Abbott has been mentioned as a possible presidential candidate. Braddock said the timing of the special session and the “big stage” of CPAC is no coincidence.

“He can say (to the CPAC crowd) look, we're starting a special session that I myself called down in Austin and we're going to be doing some of the things that, you know, President Trump and his supporters would like us to do, like ban critical race theory, like go after transgender youth in sports and a few other of those, what a lot of folks would consider red meat for the Republican base," explained Braddock.