This is Hegar’s second bid for Congress in recent years, having run for U.S. House of Representatives - District 31 in 2018. 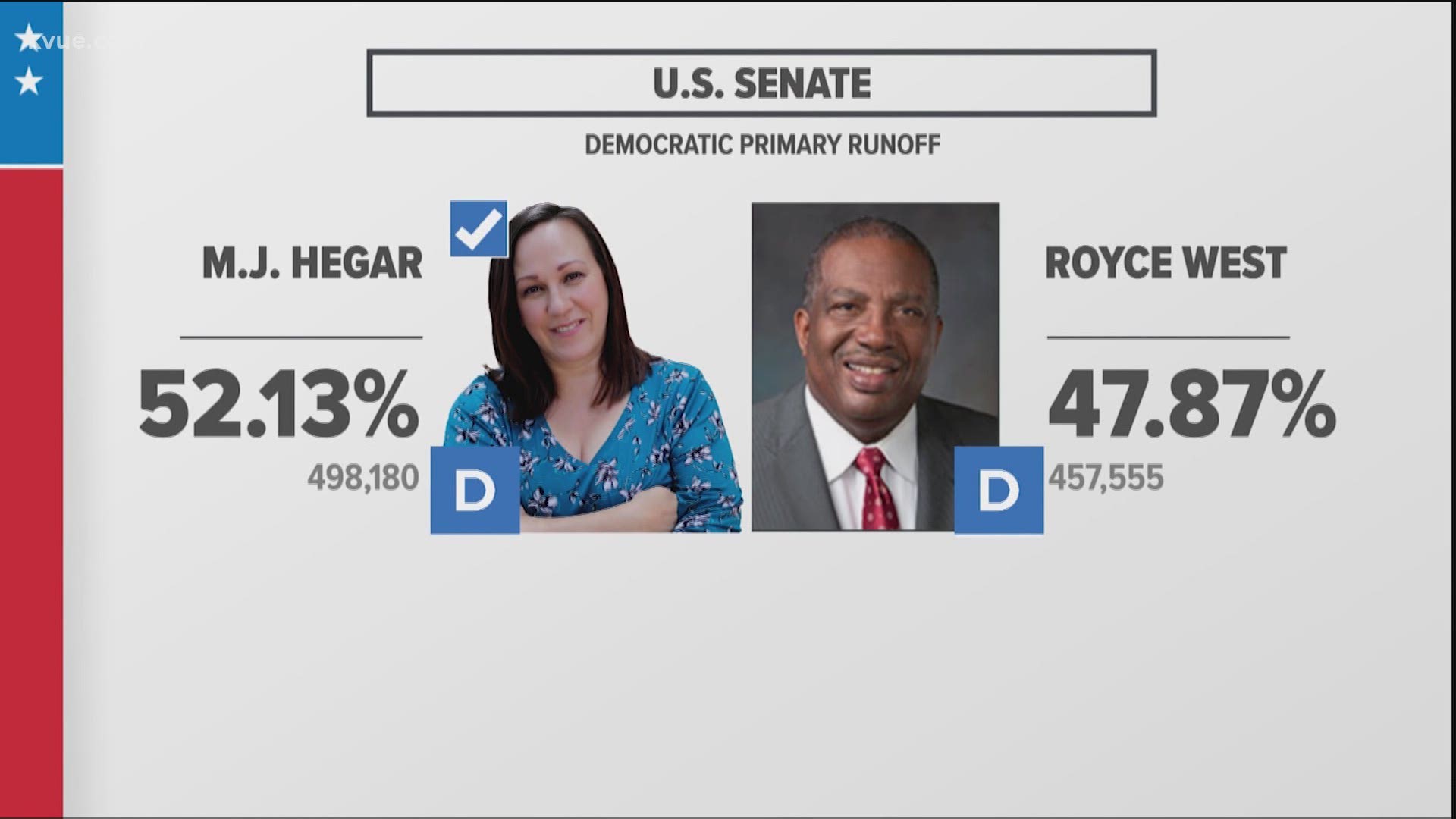 This is Hegar’s second bid for Congress in recent years. In 2018, she ran for the U.S. House of Representatives for Texas’ 31st Congressional District and won the Democratic nomination. But she was ultimately defeated by 3% in the general election by incumbent Republican John Carter.

After 11 p.m. on the night of the primary runoff election, Hegar claimed the victory, and West said a statement would come the following morning. The following day on July 15, West announced he conceded to Hegar, wished her luck and congratulated her.

“When I was born, my mother did not have the right to vote. She reminded me of this bracing fact this week. It brought home to me both how far African Americans have come as a people, and how much more work is to be done. I’m proud my mother was able to vote for me in this race, and I am re-energized today to continue my work as a state senator, addressing the needs of my constituents. We will keep working for justice in Texas,” West said in a statement.

RELATED: Race for the U.S. Senate: Get to know MJ Hegar

In the March primary, Hegar faced 11 opponents for the Democratic nomination for U.S. Senate and fell short of securing 50% of the vote. She then went head-to-head against West, competing against him in two June debates – including a heated one hosted by KVUE – before facing him on the ballot in July. Democratic voters chose her as their Senate nominee, and she will now face incumbent Republican Sen. John Cornyn in November.

Royce West and MJ Hegar call for criminal justice reform, save their attacks for John Cornyn in Senate runoff debate

Before entering politics, Hegar – a Leander native – served three tours in Afghanistan as a combat search-and-rescue and medevac pilot for the U.S. Air Force. During a rescue mission, she was injured by enemy gunfire and, for her injuries, she received the Purple Heart. She has also been awarded the Distinguished Flying Cross with Valor.

Hegar believes every Texas citizen should have access to Medicare. She supports universal background checks for gun ownership, a ban on the sale of assault weapons to the public and has called for an end to open carry. According to her official website, she is an advocate for reproductive rights, LGBTQ+ rights and veterans’ rights. She has also said that Americans “must set aggressive goals for the expansion of clean, renewable energy” and that “Texas has the opportunity to be America’s leader in wind and solar energy.” To read more on Hegar’s stances on a variety of political issues, visit her website.

“Whether it’s fighting for Hurricane Harvey relief, working to strengthen the criminal background check system to ensure convicted felons and domestic abusers cannot illegally purchase a firearm, or his dedication to providing much-needed resources to reduce the backlog of untested rape kits -- Senator John Cornyn has delivered for all Texans.

It took millions of dollars in outside money to help Hollywood Hegar clinch the Democratic nomination. In reality -- and without the special effects -- her candidacy isn’t very impressive. She was passed over for endorsement by grassroots leaders across the state and nearly every elected Texas Democrat. She would not have won the runoff in Texas were it not for the support of national Democrats like Elizabeth Warren and Chuck Schumer, to whom she is now indebted.

MJ Hegar supports a public option in health care as a ‘stepping stone’ toward Medicare for All and has called single-payer healthcare ‘the future of our healthcare system.’ Hegar would also be a disaster for Texas’ energy sector because she supports a carbon tax and cap-and-trade. We look forward to shining a spotlight on how ideologically out-of-touch Hollywood Hegar is with Texans and her inability to go off-script to have substantive policy discussions.”

On Tuesday, Nov. 3, Texas voters will choose either Hegar or Cornyn to be their senator.

Texas will extend time that schools will be allowed to stay online-only, Gov. Greg Abbott says

100 percent of regular ICU beds in Texas Medical Center occupied, but hospitals have space for surge