November's election will determine how many Democrats and Republicans are on each side of the aisle for the 87th Texas Legislative Session. 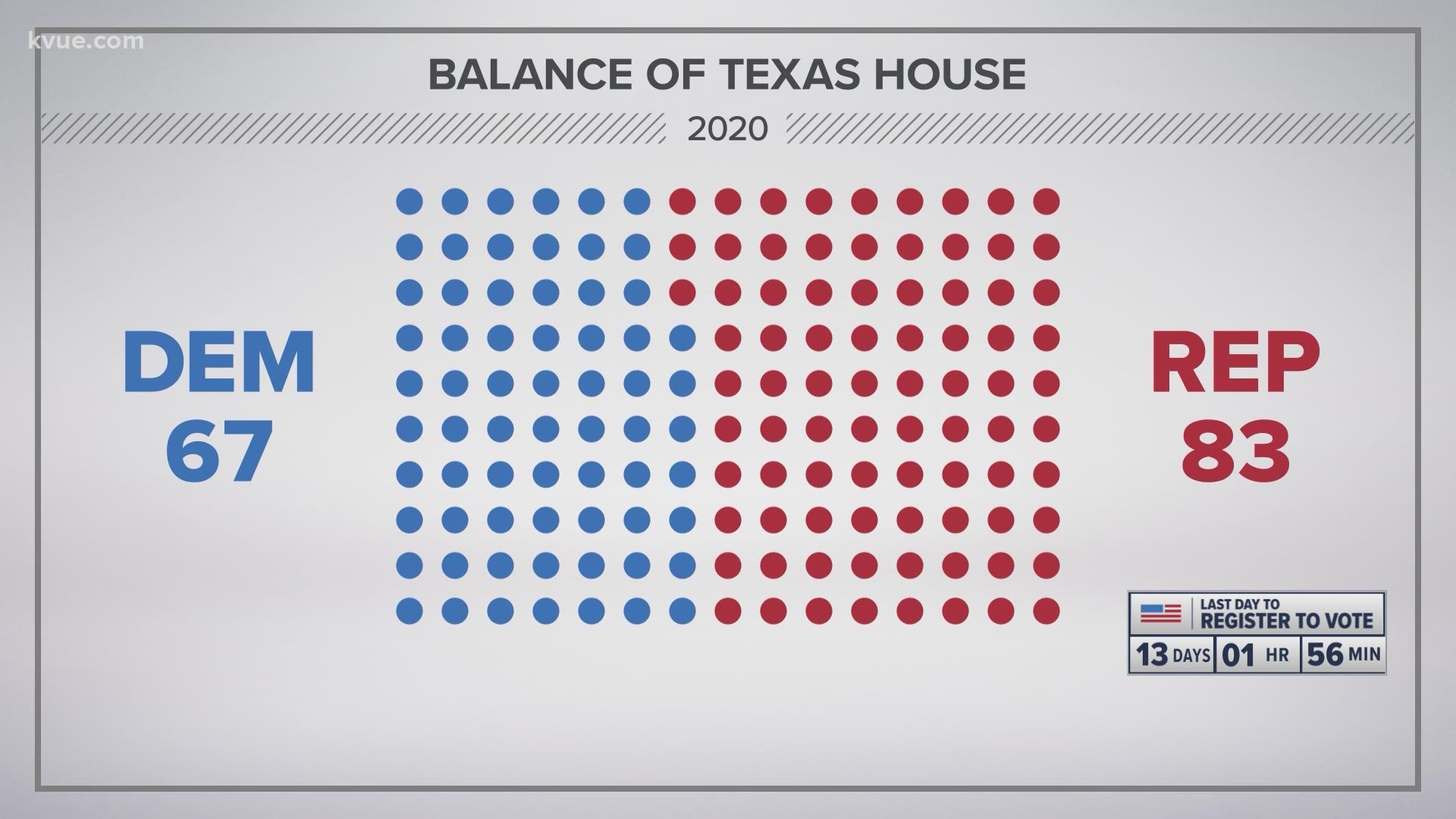 AUSTIN, Texas — While many voters' first thought about Election Day is who they'll vote for for president, knowing who is running for the Texas House of Representatives will also be key. The makeup of the Texas House could determine which bills pass or fail during the 87th Texas Legislative Session, scheduled to begin Jan. 12, 2021.

"The legislature is important because they figure out what's going to go on, you know, when you're addressing problems like the problems we have right now," Ross Ramsey, the executive editor of the Texas Tribune, told KVUE Tuesday. "All of those kinds of decisions, or a lot of those kinds of decisions, are made at the State level. And that starts with the Texas Legislature."

Democrats have not held a majority in the Texas House since 2001. Currently, there are 83 Republican seats and 67 Democrat seats, totaling 150. And experts say this coming election could tighten that gap.

"We expect it to be really close this upcoming session," said David Thomason, an assistant professor of political science at St. Edward's University. "We look at some estimates statewide and, if you look statewide, this election will come down to how well the Democrats can get into those suburban areas and how well the Republicans can maintain control of suburban areas."

One big impact of the election results this November will be how the Texas Legislature redistricts the Texas political map.

"In terms of what that means, redistricting for this upcoming session means that they will draw the boundaries for congressional districts, for the Texas Legislature, which includes the House and the Senate. And what that really boils down to is whichever party is in control will really be able to decide just what the state looks like in terms of its political boundaries for the next 10 years," Thomason said.

He added that it could determine the direction that the legislature moves on issues like funding public schools, transportation, criminal justice and more.

As for races in Central Texas, a few that experts say could yield significant results include:

"Of course, you want to know who the candidates are. You want to know what they stand for and what they're doing," Ramsey said. "To a great extent, voters vote party. And, you know, if you don't know the name of a candidate, a lot of times people vote party. We don't have straight tickets this time. So, it's going to be interesting to see how many people vote at the top of the ticket for president and make it all the way down to races like sheriff and county commissioner and things like that."

Below is a list of Texas House districts on the November ballot.

For more on which national, state and local races you may see on your ballot, check out the KVUE voter guide.

WATCH: How to register to vote in Texas

Man charged with capital murder in 2016 deaths of visiting friends