After securing Democratic nomination, MJ Hegar says she is 'on track' to defeat Sen. Cornyn this November

Hegar received 52% of the vote while Royce West followed close behind at 48%. 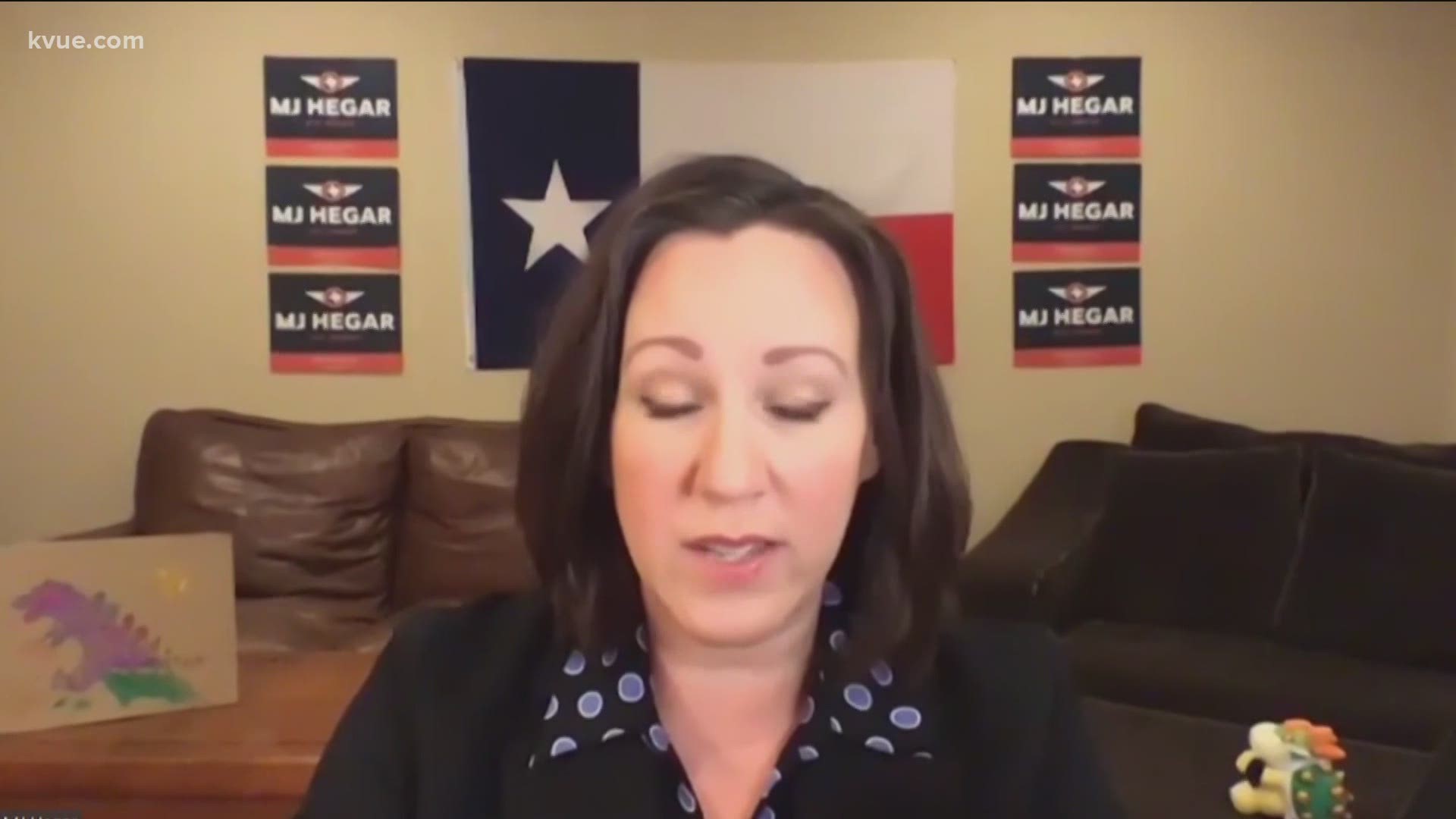 Goudeau: First and foremost, congratulations to you on your win from last night.

Hegar: Thank you so much, Ashley. We are really proud of the grassroots army and coalition that we built and so humbled by all the support we've gotten from across the state.

Goudeau: You know, it was a really close race, still a close race, as these results coming in about 52 to 48%. What do you think put you over the top?

Hegar: First, with just all of the, you know, we drove tens of thousands of miles across the state, went everywhere, went to every corner of the state, met with just tens of thousands of voters and community leaders. And I think that building those relationships over the year before COVID were not only critical in the primary but are going to be critical in the general as we're not only, you know, talking to regular, everyday Texans and building my policy platform on the solutions to the challenges that most of us may face. That's the difference between me and Cornyn, is that he's so kind of out of touch with regular Texans. So I think that not only the impact it had on building my policy positions and my ideas and other Texans ideas for solutions but also those relationships and showing people that they have an opportunity to have a senator that cares enough to come to their community and talk to them in person about that stuff. It's really critical.

Goudeau: Let me look at the attacks that are coming against you. Obviously, Sen. John Cornyn wasting no time launching some of those attacks, even heading just to add to this runoff election. Some of his criticisms are the same criticisms from some of the people in the Democratic Party who say, you know, you had the backing of Washington. You have some big names, big attention. They're trying to meddle in Texas elections. What do you say to that type of criticism?

Hegar: I think that the person who shouldn't be meddling in a Democratic primary is a Republican incumbent and that it's a really big red flag that he knows that he's in a lot of trouble. I don't know that in his, you know, nearly four decades in politics that he's ever had to meddle and actually spend money in a primary trying to, you know, stop himself from having to face me in the general. So, you know, I'm really proud. We've raised millions of dollars with an average online donation of only $23. And we've got donations and support. Well, we have donations from over three-quarters of the counties. But as you saw from the electoral map, we have support from nearly every county. And, you know, that's going to be difficult for him to overcome in the general. And he knows it. He's kind of off the rails. He's all over the place. I'm too far right. I'm too far left. And he can't decide how to attack me. So it's kind of thrown a bowl of spaghetti at the wall to see what's going to stick. And I think he's going be disappointed.

Hegar: It would be, I believe, that the value of being battle-tested and having to really dig in deep and be very thorough on your policy positions is an advantage for us. He's never had a rough race. He shows it now. It seems a lot of the moves that he and his team are making are very kind of amateurish things that you would see from a first- or second-time candidate. And so I'm actually really excited about meeting him in a debate, getting some thorough answers to some of the disinformation that he's been spreading. And, you know, I think that as Texans learn more and more about him and I, because he doesn't have a very high name ID for a three-term senator, especially as Texans learn more about both of us, they're going to see that they have an opportunity to vote for somebody who is more like them. I mean, this November, we're going to vote out anybody, any politician that is more D.C. than Texas. And I can't think of anyone that applies to more than John Cornyn.

Goudeau: Do you think you'll be able to catch up fundraising-wise?

Hegar: Yeah. You know, he's got some really rich, powerful people with a very profit-driven reason to keep him in office. He legislates in a way that maximizes the profit margins for the private detention centers and the gun lobby and big pharma. So there's no doubt we're facing some big guns. But when enough of us Texans stand together and say enough is enough and, you know, pitch in five bucks, you know, like I said, our average donation's 23 bucks, and we've still raised nearly $7 million that way. I'm confident, you know, Texans, Texans have a very sensitive "BS" meter and Texans can. But I do a lot from their representatives. One thing that they cannot abide is spinelessness and bootlicking. Those qualities are not something we associate with Texas. And I believe that we will have our voices heard in November when we're looking at the polls in the presidential race.

Goudeau: You have some polls that show former Vice President Joe Biden actually leading against President Donald Trump in the state of Texas. Some people now really starting to see Texas as a battleground state. How does that give you an advantage?

We in the military know that he's not going to deploy troops lightly. His son served in the military and died, a lot of people feel, from Gulf War syndrome. You know, we know that he is ... he takes very seriously the deployment of military troops. We know that he isn't going to rob our construction budget to build some, you know, monument to his ego. So, you know, I have high hopes that we're going to deliver 38 electoral votes for Vice President Biden because we're going to be running a solidly coordinated campaign. One of the things I learned in the military is that you can't accomplish a mission by yourself. So we're very excited about building a team that's going to deliver good results and good servant leaders who are actually going to work for regular working Texans instead of big, powerful special interests.

Goudeau: You know, even though despite kind of this momentum that the Democratic Party has right now in Texas and Cornyn's seat is still listed as likely red, when we look at some of the polling, does that discourage you at all?

Hegar: Well, we just moved to lean red, so that encourages me. And that happened earlier than what we expected. And we've already started tightening up the race. And it's still three-and-a-half months out. So I would say we're ahead of schedule and we are on track to beat him in November.

Goudeau: All right. Any final thoughts for our viewers?

Hegar: Yeah, you know, we've been a low voter turnout state for so long and because of that, our representatives do not reflect our values. Most Texans don't want voter suppression. They want vote by mail. They don't want gerrymandering. They don't want corporate money in politics.

This election is our moment to define who we are and to send that message to our allies and enemies around the world. And this is our only moment. It's our last chance to maintain the mantle of the leaders of the free world. And we have the chance to change the direction of our entire country from right here in Texas. We're going to flip the Senate and get Mitch McConnell's legislative graveyard to open up and start working for regular people again. And we are going to turn the White House from here in Texas. And frankly, that's exactly how it should because we're Texas.

“Whether it’s fighting for Hurricane Harvey relief, working to strengthen the criminal background check system to ensure convicted felons and domestic abusers cannot illegally purchase a firearm, or his dedication to providing much-needed resources to reduce the backlog of untested rape kits -- Senator John Cornyn has delivered for all Texans.

"It took millions of dollars in outside money to help Hollywood Hegar clinch the Democratic nomination. In reality – and without the special effects – her candidacy isn’t very impressive. She was passed over for endorsement by grassroots leaders across the state and nearly every elected Texas Democrat. She would not have won the runoff in Texas were it not for the support of national Democrats like Elizabeth Warren and Chuck Schumer, to whom she is now indebted.

"MJ Hegar supports a public option in health care as a ‘stepping stone’ toward Medicare for All and has called single-payer healthcare ‘the future of our healthcare system.’ Hegar would also be a disaster for Texas’ energy sector because she supports a carbon tax and cap-and-trade. We look forward to shining a spotlight on how ideologically out-of-touch Hollywood Hegar is with Texans and her inability to go off-script to have substantive policy discussions."