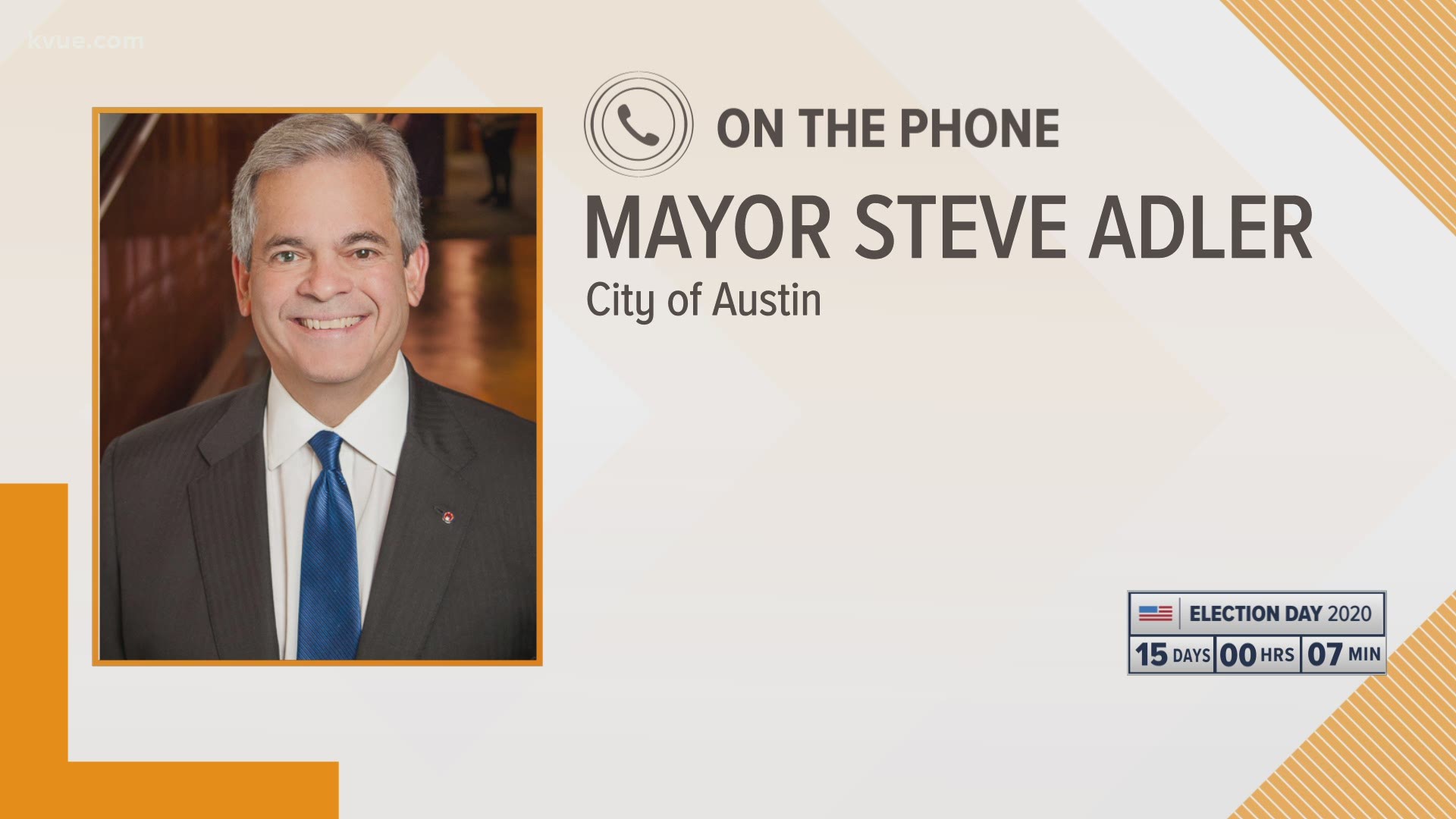 AUSTIN, Texas — Central Texas has seen a record turnout so far in this election period.

As of Saturday, nearly 184,000 people had voted in Travis County. At more than 850,000 registered voters, this year, a record number of people registered to vote in Travis County, which may account, in-part, for the larger voter turnout.

The mayor joined KVUE Daybreak Monday to talk about the 2020 November election. Here's what he told KVUE's Mike Rush in a Q&A.

Question: In Travis County, in particular, we've had some really good numbers of people turning out to the polls in the first few days of early voting. Why do you think there's such an interest in this election?

Adler: Well, I tell you, I think people have been waiting for years to be involved in this election. And, boy, there are a lot of close races. You know, for the first time in a long time, the presidential race is close. But we have House races, we have congressional races. We have a Proposition A for public transit. There's a lot on this ballot. I think a lot of people want to be heard and it's exciting to see.

Question: Let's talk about Proposition A because, as you said, this is a very big plan that is on the ballot for Austin voters, a multi-billion dollar transportation plan that is aimed at alleviating, helping fix the many traffic issues that Austin faces, the struggles that we have. Some say that their taxes will increase exponentially by 25%. These are business owners that have told us that. But you say they're wrong about that. Why are they wrong?

Adler: The property tax bill increase associated with this is about 4% for the median homeowner. It's about 78 cents a day. And I do hear those people suggesting tax bills will go up much higher than that. It's just not true. It's an objective fact. And I'm hoping that people will take a look at it. It's an important thing for us to do. The cost of not doing this is so much greater than that % margin. So, this is something I think the community's ready to do on so many levels.

Austin woman drives to San Antonio to take her family to the polls, support them during the voting process

Pride at the Polls: Voters vote alongside LGBTQ+ community Saturday

Question: OK. And I certainly don't want to this morning haggle over percentages, but KVUE has done an independent study that shows more than 20% of an increase, at least from the City portion of that property tax bill. So from a homeowners standard, median homeowners, that's about $300 or so a year. But putting the percentages aside, the businesses tell us that what they will be paying is much more in taxes. And they've consulted, they say, with their tax people to see. And so they are fearful of these increased taxes for this proposition. That is years down the line for being done, but they'll pay the taxes now. And they're doing it in the backdrop of a pandemic where they are already suffering. So, how do you respond to their very real concerns about being able to stay open with a pandemic and then with these additional taxes if Prop A were to pass?

Adler: Well, I think it's really important when we have a discussion like this that the facts are used in commercial property owners pay the same 4% increase in their total tax bill that everybody else does. It is a lot and I understand that. But the cost of not doing it is even greater. We've been talking about traffic to this community for decades. This is something big that will meaningfully do something. It's climate change. The most important thing we can do in as far as having an equitable city, one where there's mobility equity throughout our city. This is also a required thing to do. So I hear those folks, but a lot of the folks that are saying no are the same people that said no to the transit 20 years ago. I only wish we had done it then, but we have to do it now. And I hope the folks 20 years from now aren't looking back at us now and are saying where were those people and why didn't they move forward?