Andrae Blissett doesn't know why he was targeted in the Facebook post, which told people to 'be strapped' and looking for the men at an event in New Braunfels. 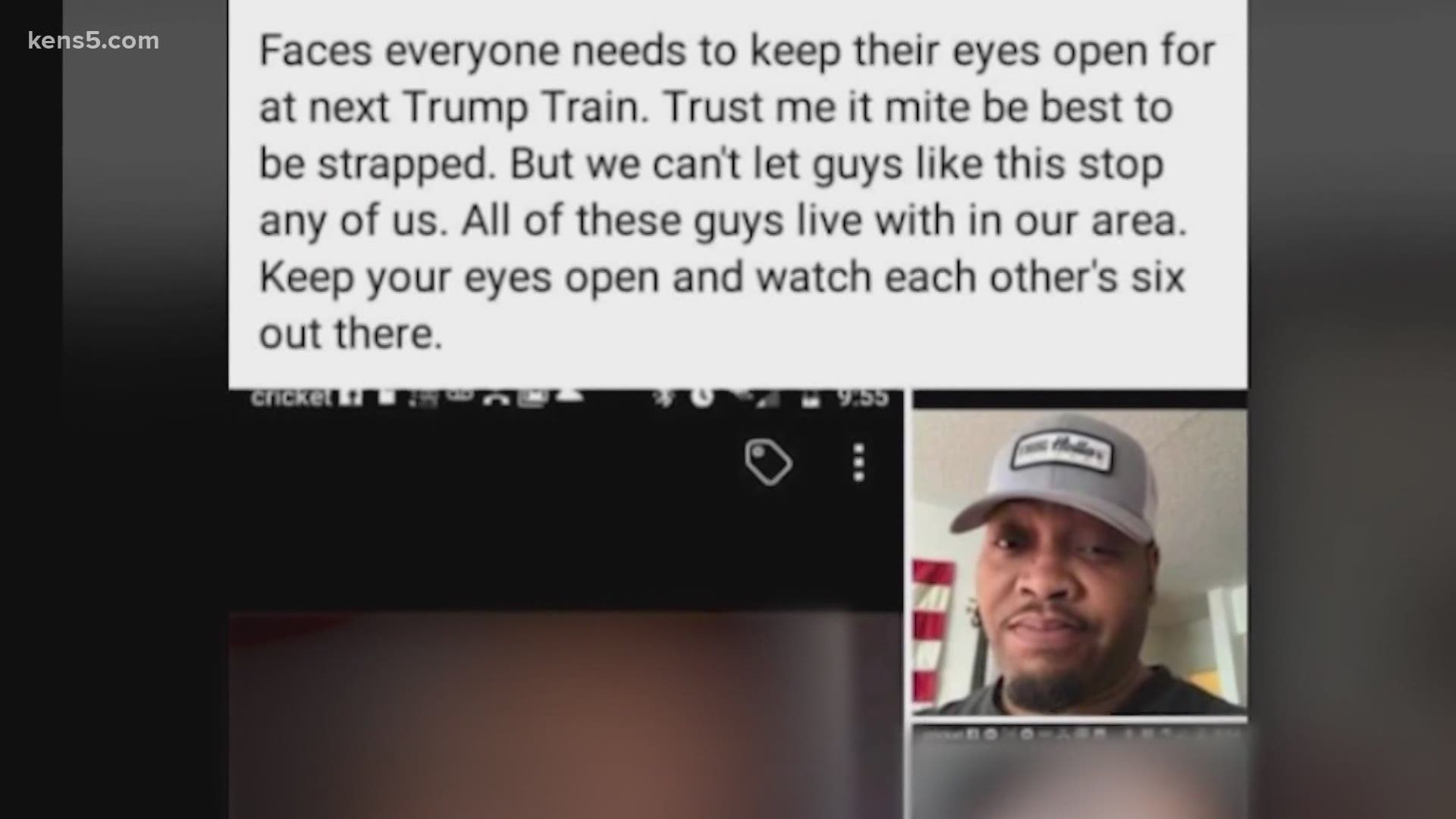 SAN ANTONIO — Some residents are concerned that hatred is spewing and escalating in New Braunfels. At issue are social media posts connected to an event supporting President Trump. One image shows a Black Lives Matter flag being drawn behind a truck. Another post singles out four black men, which some see as a death threat.

Air Force veteran Andrae Blissett is featured in the post. He said his life could be in danger.

"The intention is hurt," he said. "It is a threat. In my view this is the same as putting a bounty out on somebody."

A recent post on Facebook featured the full-time musician and three other black men. It has Blissett feeling on edge.

The post with pictures of the men said in part quote: "Faces everyone needs to keep their eyes open for at the next Trump Train. Trust me it might be best to be strapped. But, we can't let guys like this stop any of us."

"You should never put harm on anybody, because they don't believe in the same thing that you believe in," Blissett said.

The father said he doesn't understand why he was targeted, because he has no ties to the Trump Train event, which is a parade that supports President Trump. The New Braunfels event has grown in the last several weeks.

Blissett and his attorney have filed a police report with New Braunfels Police, which tells KENS 5 the post is under investigation. Below is a statement from the city manager.

"We are aware of recent social media posts regarding the New Braunfels Trump Train and the concerns that some of those posts have caused. A police report has been filed concerning the social media post in question and the matter is under investigation. The City of New Braunfels and New Braunfels Police Department unequivocally condemn any acts of racism or hatred and want all residents to feel safe in our community.  These matters are taken very seriously and if any of our citizens feel threatened, we ask that they contact the New Braunfels Police Department to file a police report, either online at www.nbtexas.org/police or by calling (830)-221-4100."

"In recent days, New Braunfels has experienced divisiveness. Some members of our community have felt attacked, demoralized, misunderstood, and concerned. This is not the New Braunfels that I know and love. Our community is known for its caring and supportive personality.

A group of residents have been holding a weekly event which organizers describe as a patriotic demonstration to spread the positive message about the current President. This event has grown significantly in recent weeks and attracted increased attention. Some images and social media posts associated with that demonstration have caused angst and uneasiness in our community.

The organizers of the Trump Train NB have assured me that the individuals in those photos and making those social media posts are not affiliated with their organization and that anyone who joins the organization with the purpose of spreading a message of hate is not welcome.

While all individuals and groups have the right to freedom of speech and to peaceably assemble, in New Braunfels, we expect that it is done in a lawful, safe, peaceful, and respectful manner. I do not condone any activity, symbolism, speech, or imagery with overt or implied racism or hatred. We take these matters very seriously and will not turn a blind eye to issues that make our residents feel threatened or afraid.

I have met with the organizers of the Trump Train NB and, along with other City leadership, am working with the MLK Jr. Association, non-profit organizations, and other community leaders to ensure our community continues to be inclusive, supportive and collaborative.

As with other demonstrations or protests, the New Braunfels Police Department will continue to provide a presence at these events to ensure safety and security for participants of the demonstrations, onlookers, and bystanders alike.

It has been my honor to work with citizens who are deeply committed to doing the right things to make New Braunfels a better place. We live here because this is the kind of community that we all want to live and raise our families in. I look forward to being part of the work that continues that legacy and helps all residents feel respected, cherished, and valued in our community."

Dr. Jessica Edwards is part of the city's diversity task force. She said it was important for her to get involved.

"When you have picture of black men circulating on the internet saying to 'be strapped' and look out for them, it almost seems like a lynch-mob connotation."

As mentioned above in his statement, the mayor said the Trump Train organizers told him the individuals making those social media posts are not affiliated with the organization. Edwards just met with organizers of the Trump Train group and said the meeting went well.

"How do we move forward," she said. "How do we make sure that everyone is safe. And finally making sure we are not infringing on anyone's right to free speech."

As for Blissett, he said he wishes no ill will towards the man who made the post.

"The only way we can move forward is unite, to come together and to love each other.  Because, we all stand under this flag. We are all American."

Blissett and his attorney said they have also filed a report with the FBI in San Antonio. It has yet to be determined if charges will be filed.

The FBI couldn't confirm to KENS 5 if a report had been filled, but a spokesperson did say the FBI takes threats very seriously.

"We work very closely with our local and state law enforcement partners and mental health professionals to assess online threats to ensure the public's safety.  We encourage members of the public to report threats of violence to law enforcement. We warn individuals who post online threats, as a joke, or to attract attention, that they can face serious consequences," said Special Agent Michelle Lee.

KENS 5 reached out to the organizers of the event, as well as the man accused of publishing the post. As of Wednesday night, KENS 5 is still waiting on a response.

RELATED: Public vs. private: A timeline of President Trump's comments on coronavirus

RELATED: 'I wanted to always play it down,' Trump says of coronavirus in journalist's book