After serving in the U.S. House of Representatives for 22 years, former Congressman Pete Sessions is hoping to now represent the people of Waco. 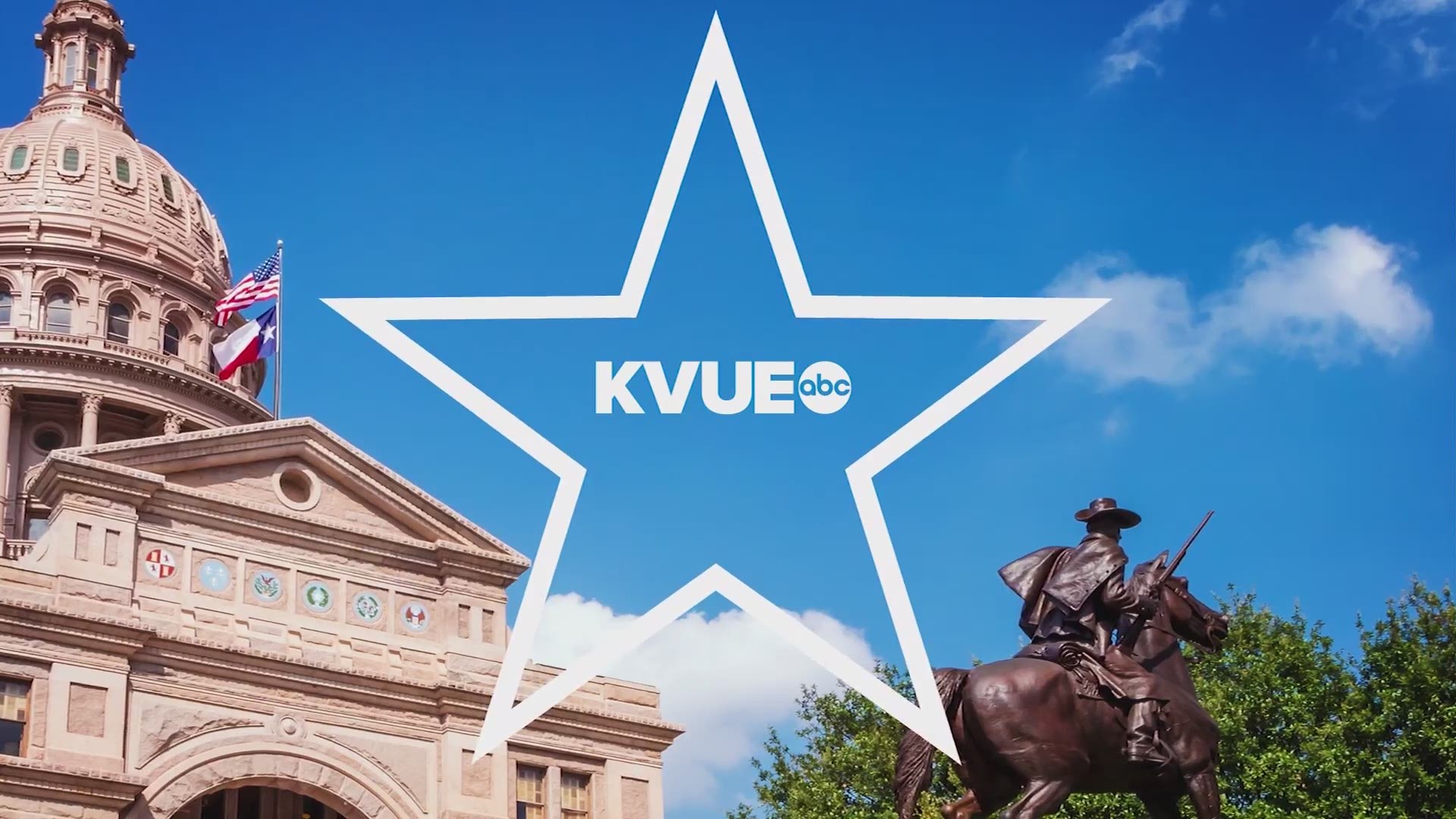 AUSTIN, Texas — Texas has a new State senator and another could be leaving the upper chamber. And former Congressman Pete Sessions joined KVUE Political Anchor Ashley Goudeau to discuss his campaign to get back into the U.S. House of Representatives.

Former Travis County judge Sarah Eckhardt was sworn in as the new State senator for Austin and Bastrop on Wednesday. Lt. Gov. Dan Patrick issued the oath of office during a private ceremony at the Texas Capitol.

Meanwhile, North Texas State Sen. Pat Fallon could be leaving the pink dome. The Texas GOP selected the Prosper, Texas, Republican to replace former U.S. Rep. John Ratcliffe on the November ballot. Ratcliffe was confirmed as the U.S. Director of National Intelligence back in May.

In an interview with KVUE, Gov. Greg Abbott said a COVID-19 vaccine could be available as soon as this year. He also said therapeutic drugs to treat patients with the virus could hit the market as soon as next month.

The biggest political news of the week came from Democratic presidential candidate Joe Biden, with a historic VP pick announcement. The former vice president named California Sen. Kamala Harris as his running mate. Harris is the first Black and Indian American woman to run for vice president on the Democratic or Republican ticket.

RELATED: Biden and Harris appear together for first time as running mates

Central Texans will have a lot of decisions to make at the polls this November, and some will elect new members of Congress. That's the case in U.S. Congressional District 17, which stretches from Travis, Bastrop and Lee counties all the way to Waco and Bryan-College Station.

Republican Rep. Bill Flores flipped that seat from blue to red in the 2010 election. But after five terms, he's not seeking re-election. The Democrat Flores faced in 2018, Rick Kennedy, is back for another run. This time, he'll face former Dallas-area Congressman Pete Sessions, who now lives in Waco.

Sessions spoke with KVUE's Ashley Goudeau about his campaign.

Ashley Goudeau: For our viewers who may not be familiar with you, tell them a little bit about yourself and why you're running for Congress.

Pete Sessions: "Thank you very much. I grew up in Waco, went to high school in San Antonio, attended Southwestern University in Georgetown and for the last 12 years, I sat on their board of trustees. Southwestern and Georgetown has a good presence in this market and is a great school. I represented the 5th District of Texas for eight years, which is about 40% of the current Texas 17 District, years ago. And then I represented Texas 32, which was primarily in Dallas, for some 15 years. So, [I] had a 22-year career in Congress. I've got two beautiful boys and live here in Waco and a wife. And I'm running in Texas 17. I was asked to do this by county chairmen who wanted to make sure that the Republican Party had a person who not only understood the district but was able to be a conservative with ideas to solve [the] problems of our country. And so, they sought me out. I moved back home, and I'm very happy."

Goudeau:  Your opponent, Rick Kennedy, and others have expressed some skepticism about your candidacy. They've been saying that, you know, after losing that North Texas seat in 2018, you moved to Waco just so that you could run for Congress again. What's your response to this criticism?

Sessions: "Well, I don't – I think it's an observation, not criticism. You know, I was asked by three Republican county chairmen, including the dominant county, which is McLennan County, that chairman. I have the experience, the know-how and the desire to help our Republican Party to come with an experienced understanding of not only what needs to be done, but how to do it. And I represented about 40% of this district before. And then, when you combine where I grew up and live – Waco, Texas – it's been a good attribute for me, understanding not just the needs of the district, but the desires that they have about the future. And I think we will do quite well. I think we'll win this race. But the opportunity to represent a far-flung district is difficult. [District 17] goes from Waco down to Bryan-College Station and then west to Austin, Pflugerville. And so, it's hard to have any one person that [has] necessarily lived everywhere.

But I feel very comfortable in representing people and have been through a year-long process, including a Republican primary and then a runoff that was extended for months. So, I think I'm well-positioned to not only understand the needs but also my voting record is supportive of that. As Rick knows, I have a 100% voting record with the Texas Farm Bureau and 100% record of voting to make sure that the people who live in this district have a growing economy. And that is what the needs of this district are."

Goudeau: If you are elected to Congress, what will be your top priority?

Sessions:  "Well the top – the top priority without any question is to bring the stability in Washington where we can work together. And Mrs. [Nancy] Pelosi has decided that that is not something that she would wish or choose to do. They're for fighting. Some of her newest members are there simply to turn America into a socialist nation. And that is not positive. We are a free enterprise system. We want and need people to make their own decisions. And we must understand that we cannot allow – we cannot allow this to happen. And so, winning the majority is everything to the – to the nation. And that's what I will help not only represent but bring about."

Goudeau: What's one piece of legislation, you know, day one, you want to work to get passed?

Sessions: "Well, it's really a process and it is us working together to make sure that what we're doing is not placing our country into further debt. As you know, we've run a $2 trillion deficit this year alone. The previous record had been $800 billion. So, we are many times above that. So, what we need to do is decide how to fund the government, how to make sure Social Security and Medicare and Medicaid are properly taking care of, but not indebt the nation to where we lose our ability to be the greatest nation on the face of this earth.

So, it's really a process that I was a huge part of during the six years that I was chairman of the House Rules Committee. For eight years, we held government spending flat. That included the military, that included other government spending. And during that period of time, the free enterprise system grew and [the] government then had to make tough decisions about the use of money. They didn't have enough to spill on the floor. And it made us more powerful because we're spending entirely too much money rather than looking at this as an asset for our children and grandchildren."

Goudeau: You know, we can't ignore the fact that we are in the middle of a pandemic. And so, as a Republican, I'm interested to know one thing that you think President Donald Trump has not done well in his response to COVID-19.

Sessions: "Well, I think that my perspective is I've always, Ashley, been a part of supporting a team. And it's hard when you get political science and sound, medical science together. Political science is the politics. Medical science is that attribute that sometimes, while it can be sound, it takes a while. And the president wanted to make sure, on behalf of the American people, that we did not surrender our economy because we became struggling with this COVID virus. And I think the president became frustrated with it. [Dr.] Tony Fauci is a very dear friend of mine. Francis Collins, who's the chairman of the NIH [National Institutes of Health], I know very well. And these people have a process that's in the best interest of the American people, but it takes a long, long time and it's a long process.  And I think the president became frustrated. And sometimes things that are seen by the president, he wants them quicker or more quickly accomplished than science was a part of. And if you're involved in science, if you're involved in research and development, it's worth doing right. And so, I would say the president, in my opinion, I wish he had not become necessarily as frustrated as he did, but actually worked through the sound science work with Dr. Fauci and given the American people a complete seamless understanding about where we are, what was next and why we needed to wear our masks, but also why this could not be, the virus should not be, bigger than we are."

Goudeau: Share final thoughts with our viewers about why you think they should cast their ballots for you this November.

Sessions: "Ashley, thank you very much. I'm very excited about running again and being in the fight for our country. I think that now more than ever, that the differences in our party have distinguished themselves, not just in Minneapolis and in Oregon and in Washington, but really in Chicago, as we speak. And that is that there are certain elements of the Democratic Party that have turned out that they would find that that's the right way to approach the future: to attack law enforcement, to attack the military, to defund our police, to tear down police stations. In fact, we need the rule of law. People who are men and women, children, we need law enforcement there. Criminal behavior and activity is not going away. And if you do not have that strong line of the blue defense of the police department backed up by mayors and city council, people with the consent of people, then we're in trouble. And I am very concerned that this defunding of the police, the defunding of the law enforcement and [in] particular federal law enforcement, which is the angle that a member of Congress would take. [It] would be very, very detrimental to our future of this country and the success.

And so, I would like to ask for people to vote for me because I am a conservative Republican that reaches for results and that is a better economy that takes our roads and bridges and makes sure they are properly funded. But also, I have a 100% lifetime record with the Texas Farm Bureau to make sure that our communities that are rural, our farmers and ranchers and food security is effectively important and grow our economy. And I'd like to ask for their vote and anybody that's within our voice should be. We'd like to ask them to be a part of the Republican Party that would make this state sound and better and prepare a future better for our children and grandchildren. Thank you."

Earlier this month, Sessions' opponent, Rick Kennedy, spoke with Goudeau about his campaign.