The bill would allow eligible Texans to carry handguns openly or concealed without a license. 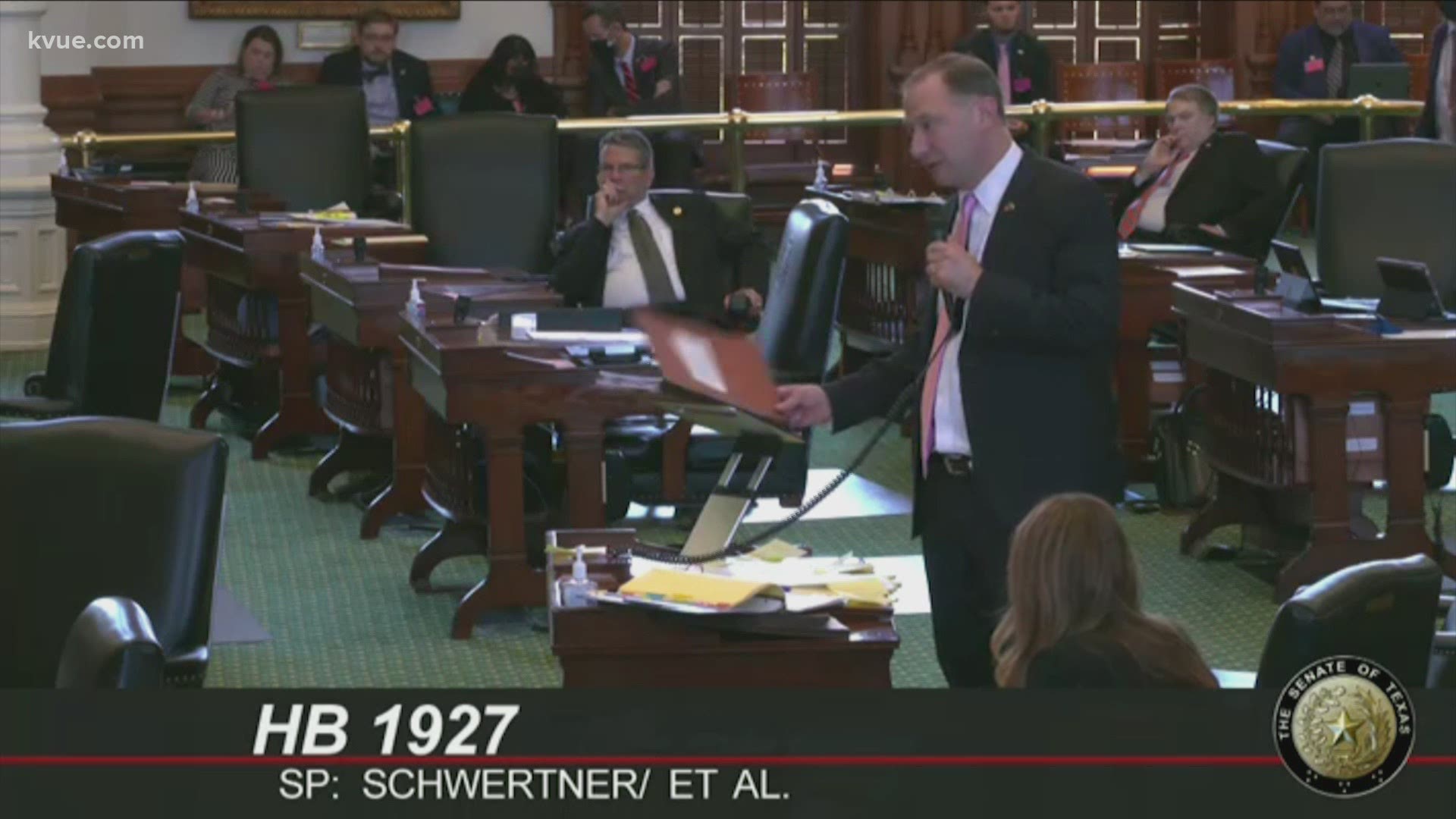 AUSTIN, Texas — After hours of debate on Wednesday, the Texas Senate voted 18-13 to pass House Bill 1927 (HB 1927). The bill would allow Texans 21 and older who are eligible to purchase a handgun to carry a handgun openly or concealed without a license.

With less than one month left in the session, time is of the essence, so since there was not enough support to suspend the Senate's rules and take a final vote on the bill on one day, the Senate adjourned for about one minute then started a new legislative day to move the legislation forward.

The bill will now go back to the House, where lawmakers can accept the Senate's amendments or request a conference committee, where appointees will resolve the differences in the chamber's versions.

Gov. Greg Abbott has previously stated that he would sign the bill into law.

"I support it, and I believe it should reach my desk, and we should have 'constitutional carry' in Texas," Abbott told North Texas radio host Rick Roberts earlier this year.

The Texas House of Representatives passed the bill in mid-April. It was written by Rep. Matt Schaefer (R-Tyler)

Currently, Texans must obtain a license to carry. To obtain one, individuals must participate in a training class, pass a written exam and shooting test, and submit fingerprints.

Supporters of the bill say it will help eliminate barriers, such as time and money, in getting a license. Meanwhile, opponents believe removing the required training on gun safety and handling is dangerous to the public.

Austin Police Department Interim Chief Joe Chacon is one of them, who has stated that training for handgun carriers is crucial for public safety. He held a press conference on April 29 to announce his opposition to the bill.

"It’s reasonable and important to ask that someone carrying a firearm in public know how to safely handle and store a gun and have a basic awareness of the laws related to weapons and the use of deadly force," Chacon said. "Stripping away those safeguards will make our streets less safe and they will make law enforcement’s jobs harder."

“I am proud that the Texas Senate passed House Bill 1927 today, the Constitutional Carry bill, which affirms every Texan's right to self-defense and our state’s strong support for our Second Amendment right to bear arms. In the Lone Star State, the Constitution is our permit to carry. I congratulate Sen. Charles Schwertner for his leadership on this important issue and for the thoughtful and respectful debate in the Texas Senate today. We have moved quickly on this legislation and I want to thank all those involved who helped gather the votes needed to pass this historic bill.”

"I used to prosecute domestic violence cases. The suffering I saw and my often failed attempts to alleviate it and prevent it in the future haunt me to this day. HB 1927 will make it easier for criminal, violent, distraught or mentally unstable abusers – like the ones I used to prosecute – to carry weapons with them nearly everywhere they go. It removes one of the few remaining filters law enforcement has to remove deadly weapons from the hands of deadly people."

PEOPLE ARE ARE ALSO READING:

'The best 23 minutes I've had as a firefighter': Healthy newborn surrendered to Safe Haven baby box