“I just think there’s a big chunk ofTexans and Americans – they want somebody to do the damn job,” said Bill King, founding chairman. 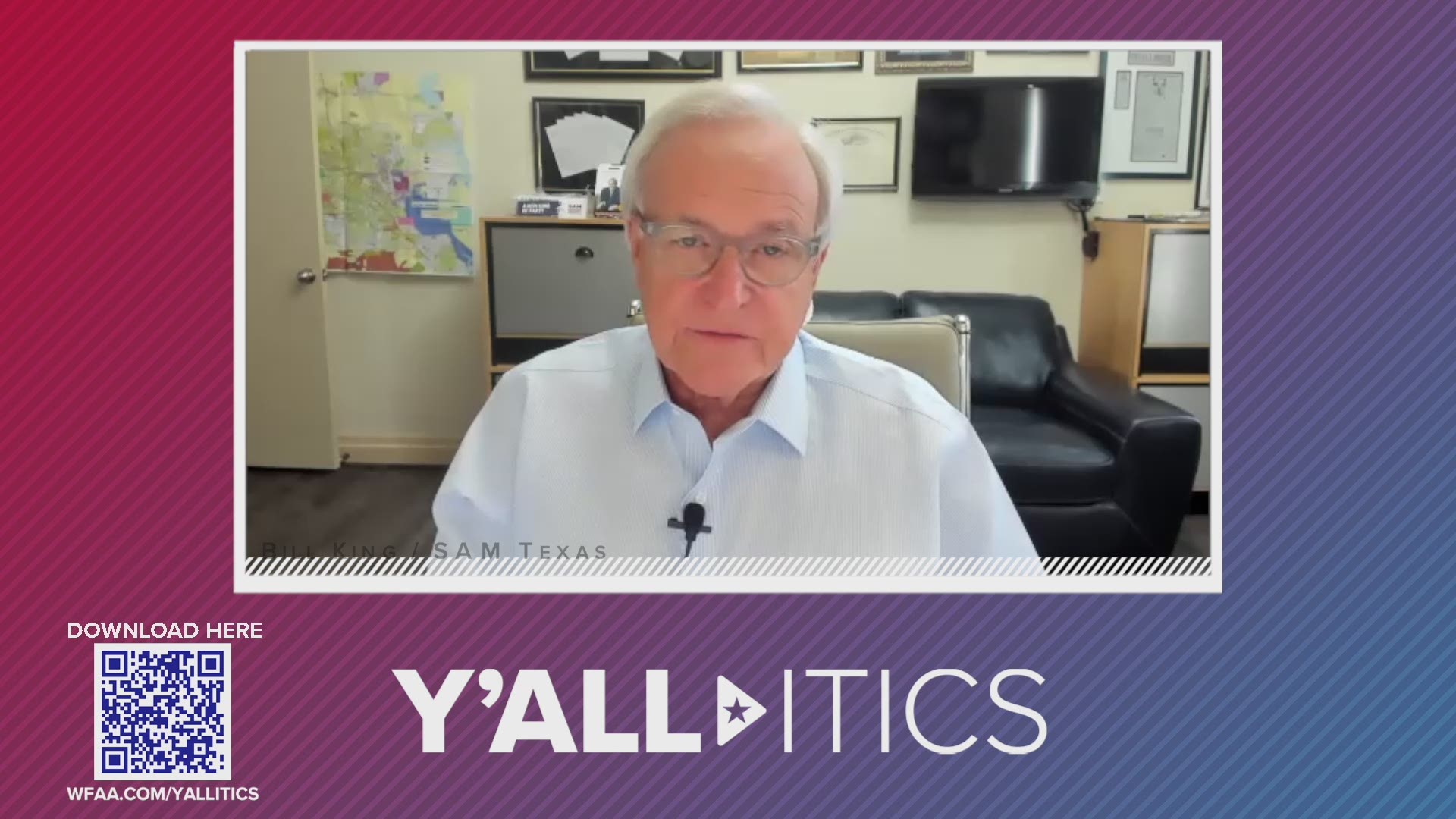 DALLAS — If this were an old western, imagine the outlaw Cowboy kicking in the saloon door and making a grand entrance, forcing everyone to take notice.

That's exactly what a new political party in Texas is doing.

“I just think there’s a big chunk of Texans and Americans, they want somebody to do the damn job,” Bill King said on Y’all-itics.

Bill King is the founding chairman of Serve America Movement (SAM) in Texas. He’s also the former Mayor of Kemah and a former candidate for Houston Mayor (he lost a close runoff election to current Houston Mayor Sylvester Turner in 2016).

King said the folks who started SAM about three or four years ago were in the middle of the political spectrum and frustrated by the fact that both parties kept “careening off the edges.”

“It originally started out as sort of a good government movement, kind of like no labels or some of those,” King said. “But they quickly determined that the only way you can really do that is to organize a political party to exercise raw political power.”

King said there are two main factors that makes him think the state and the country are ready for a political alternative. The first, he said, is that dissatisfaction with the two major parties has never been higher. He said that's partially because voters are only hearing from the extreme voices in both parties.

“It’s ended up with this very toxic environment where you basically have about 10 or 15% on either side of the political spectrum driving the agenda, driving the debate, driving the conversation because that’s what gets the eyeballs for social media and for the cable news networks,” King said.

To hear the full conversation with Bill King, subscribe to Y'all-itics wherever you get your podcasts: Apple Podcasts | Spotify | Stitcher | Amazon Music

The second factor, King said, is that other alternative political parties tend to be viewed as even more politically extreme than the two existing parties. King and SAM supporters say voters are ready for a party that’s in the middle, offering what they call a common sense approach to governing.

That means the two independents grabbed a combined 30% of the vote. King said Texans have generally always shown an independent streak.

SAM claims to have created the only political platform not based on rigid ideology or pre-determined policy positions. Instead, the party said its candidates will rely on the party’s process to inform decisions.

Ultimately, though, King said the party knows it will be defined by the candidates it puts on the ballot. He said there's already high interest from “recognizable” politicians.

“I recently had a meeting with seven elected officials currently in office and you know, I don’t have permission to tell you who they are, what their names are, but I will tell you there were three Republicans and four Democrats, and all of them said I’m either going to run as an independent or I’m going to associate with a new party or I’m going to quit,” King said.

King said they’ve even reached out to actor Matthew McConaughey, who’s reportedly been mulling a run for governor, but they haven’t heard anything back.

Now that SAM has filed the paperwork and is an official party in Texas, its next goal is to gain access to the ballot, which King said requires around 80,000 people joining the party by signing a petition. Once SAM is on the ballot, King said if any statewide candidate gets 2% of the vote, the party qualifies for the ballot for the next 10 years. They will try to run some candidates as early as the 2022 primary season.

Along with Texas, SAM now has an official party in New York, Connecticut and Pennsylvania, and expects Florida and California to join very soon. King said he was talking to folks from Kansas recently as well.

“I think by the end of the year we’ll have 10 or 12 state party organizations in place.”

But Texas could be the linchpin of SAM’s overall success as King said folks in other parts of the country are already paying attention to see if the party has a fighting chance in a deep red state.

The party’s next step in Texas is building out the basic infrastructure of a political party. That includes finding precinct chairs, county chairs, screening committees and, of course, candidates.

King said SAM is already putting its money where its mouth is, as he said the chapters in New York and Connecticut have endorsed Democrats and Republicans, because the party’s focus is on better governance.

“If they had somebody in one of those races they thought represented their values, then they would go endorse that person instead of running a candidate," he said. "Neither one of the existing parties would even dream of doing something like that.”