Democrats running for the U.S. Senate nomination in Texas staked out positions on issues 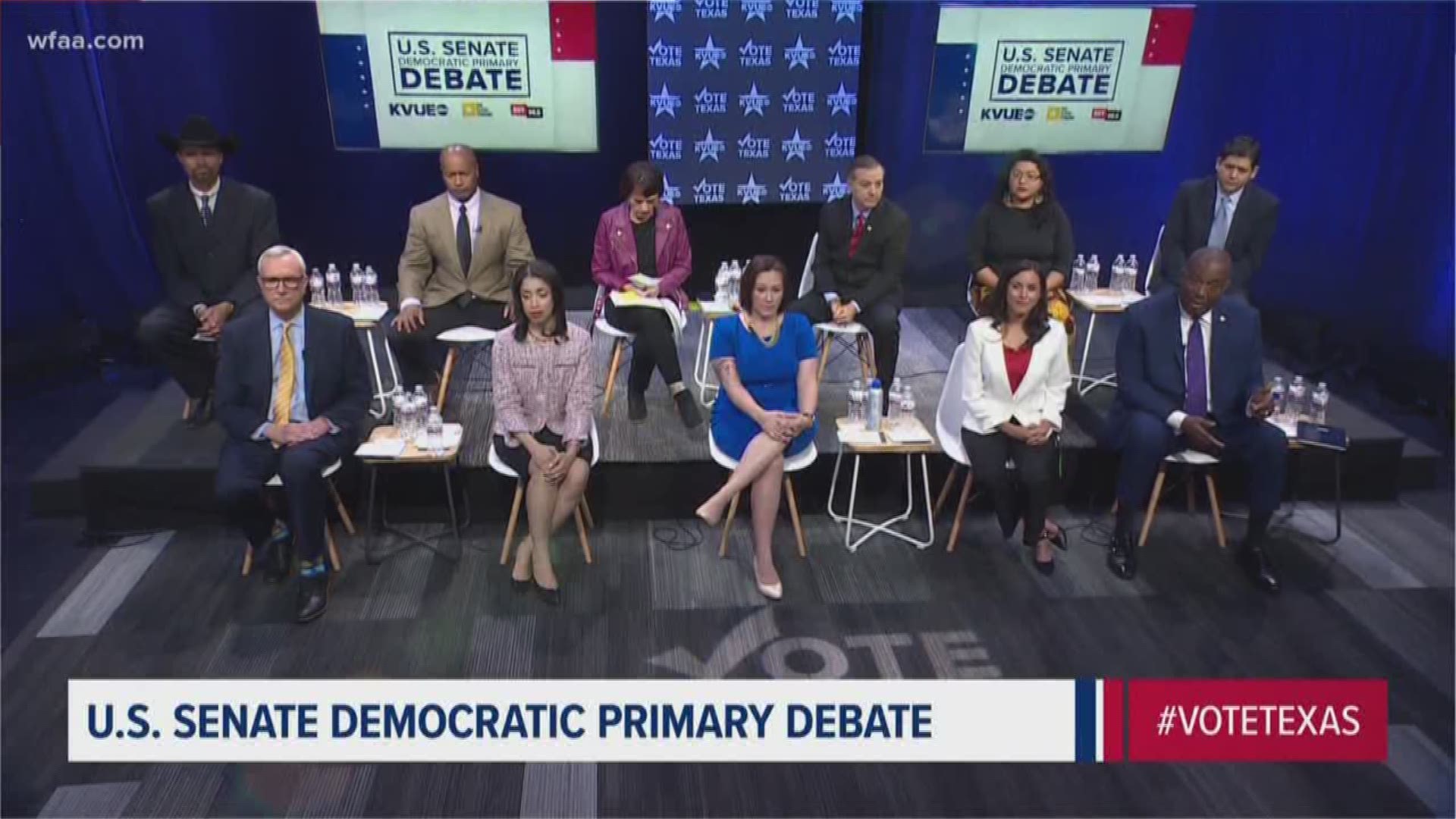 AUSTIN, Texas — Democrats running for the U.S. Senate nomination in Texas staked out positions on issues and made subtle attacks on each other in their last major debate before Super Tuesday.

M.J. Hegar walked in as the front-runner to this event. On Monday, a poll conducted by the UT Politics Project and the Texas Tribune showed Hegar clearly out front with 22% of support. Her next closest competitor, Cristina Tzintzun Ramirez, has 9% support.

In the opening minutes, when moderators asked whether the Democratic National Campaign Committee was meddling in state politics by endorsing M.J. Hegar in the primary, attorney and candidate Annie ‘Mama’ Garcia addressed Hegar directly: “You did not beat John Carter and we are not going to beat John Cornyn by playing politics as usual.”

In 2018, Hegar ran unsuccessfully for Congress.

"We narrowly lost that race, and outperformed all the statewide candidates, including Beto," Hegar responded.

She played it safe most of the night and rarely dished out attacks on her competitors.

The 90-minute debate at KVUE in Austin came as early voting began across Texas. Super Tuesday is two weeks away.

RELATED: Here's where you can vote early in the March 3 primary elections

Moderators asked state Sen. Royce West, D-Dallas, whether he’s viewed as a career politician at a time when Democrats are looking for new voices.

“The experience I have will experience this party,” West said. “If you look at Dallas County, I helped turn Dallas County blue. With me at the helm and the support, we will be able to get this done.”

“I think people across Texas are looking for fresh faces and voices,” Hegar said in a subtle shot at West.

Chris Bell defended his unsuccessful political campaigns and noted he is the only one in the race who has served in Congress before.

“I respect Senator West’s experience, but the Texas legislature is not the U.S. Congress," Bell said.

Cristina Tzintzun Ramirez was questioned whether she is too progressive at a time when Texas remains a conservative state.

“Texas voters want someone who is honest with them,” Tzintzun Ramirez said.

But West said, “No Democrat can win by being far left. It’s not going to happen.”

Almost every candidate on stage supported full legalization of marijuana.

“It’s not a high priority on my list, but I’ll look at it," Adrian Ocegueda said.

Sema Hernandez said, “Let’s free the weed,” and added that she is “the only one up here who has ever smoked marijuana.”

More than half of the candidates said they do not support U.S. Senator Bernie Sanders’ Medicare-For-All bill.

But after an hour and a half, Hegar came out unscathed. In her closing statement, Hegar said, “To John Cornyn, because I know you are watching, I’m here to say pack it up buttercup.”

"In a race that's been called 'sleepy,' 'boring' and a 'six-car pileup,' it’s no wonder Texas Democrats are tuned out. With 'Undecided' as their leading candidate, we'll be ready for whichever Bernie Sanders clone limps out of the primary on Memorial Day."

It’s uncertain if any of the other candidates will move in the poll rankings either after this debate.

With so many candidates in the race for this nomination, a runoff is all but guaranteed.

Watch the full debate below to see what candidates said about each of the issues: