'If you see throngs of people who are of color marching on the Capitol, you get a different response,' Rep. Al Green says

The Houston congressman said the response from law enforcement on Wednesday in D.C. – or lack thereof – was the direct result of white privilege. 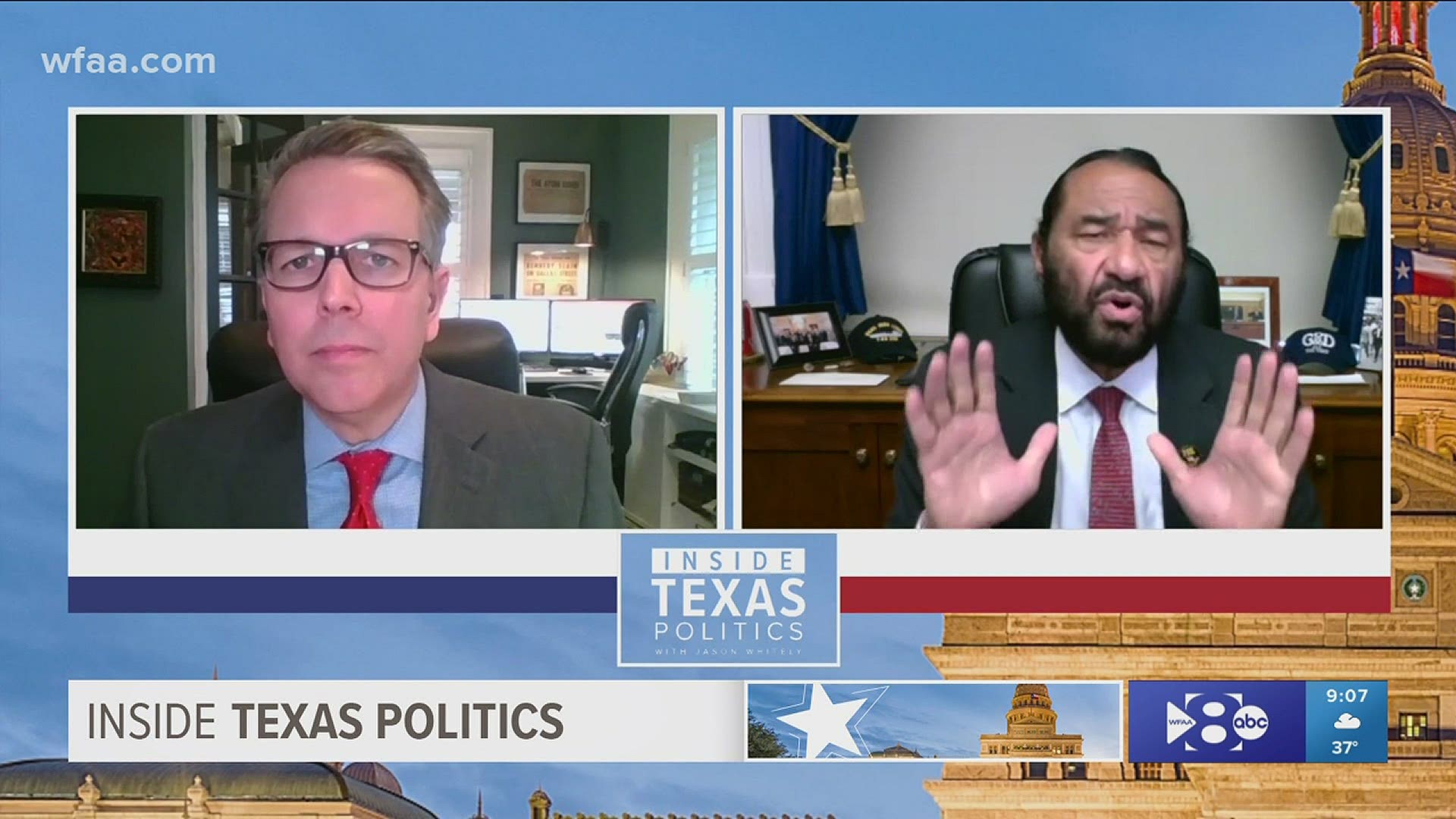 Houston Congressman Al Green says the insurrection at the Capitol, when a mob overtook the building to protest election results, isn’t quite in our rearview mirror just yet.

The Democrat said we can’t lose sight of the upcoming inauguration of President-elect Joe Biden on Jan. 20.

Green also said the response from law enforcement on Wednesday in D.C. – or lack thereof – was the direct result of white privilege.

“I think that we have to confess something to ourselves,” the congressman said on Inside Texas Politics. “If we had had throngs of people of color marching on the Capitol, climbing up the walls, breaking windows and storming the building, I think that we would have seen a response that would have been much more forceful.”

The Democrat serves on the Committee of Homeland Security, so he’ll be involved in hearings to investigate what went wrong.

But Green didn't hesitate when asked who he thinks was responsible for the insurrection.

“I hold the chief executive officer of the United States of America responsible.  I believe that the president is the source of what we saw in this sense,” he said.

After the inauguration, Biden will be in the White House and Democrats will have the majority in both Houses.

And Green said they’ll be ready to get to work.

“Here’s what I’d like to see: a piece of legislation that will engender collegiality. I’d like to see a transportation, infrastructure bill," said Green. "When we’ve done these bills in the past, everybody had something in their districts that could benefit from what we would do.”

Should there be less executive power during a crisis?

Newly elected state Sen. Drew Springer has a priority in the upcoming legislative session: making sure lawmakers are more involved during the next disaster.

The District 30 Republican has long argued the governor wielded too much power during the pandemic and he thinks it’s time to reevaluate 1975 legislation.

“Nobody ever thought a disaster would go on for months and months and maybe even as long as a year without the legislature coming back in,” Springer said on Inside Texas Politics.

The Republican has filed a bill that would mandate a special session after a certain period of time has passed if a disaster continues.

Lawmakers will determine that length of time during the session.

COVID-19 will be top of mind for lawmakers and any members of the public who are thinking about visiting the state Capitol.

Among the many safety protocols in place, anyone wishing to testify on legislation will have to take a test before the hearing.

And for the first 60 days, hearings might only take place a couple of days a week.

“We’re under a constitution. We’ve got 140 days. Come May 31st, we end," said Springer. "We need to make sure all the legislators stay well and are on the floor there to vote. But at the same time, the public has to be involved. They have to be able to petition their government to make sure we’re there for them.”

Springer anticipates lawmakers will discuss how to improve the flailing vaccine rollout in Texas.

As for other priorities during the session, Springer does not expect any movement on marijuana legalization or casinos, even though the state’s budget has been battered by the pandemic.

And while he doesn’t think the state will expand Medicaid, he does think it will be discussed.

Fort Worth’s longest serving mayor recently announced she would not be seeking a 6th term.

First elected in 2011, Betsy Price says her family started asking how long she was planning on serving after she ran for her 5th term two years ago.

More family time can be quite alluring to many a politician.

“We just finally came to the decision over the holidays that the timing was right. I told people I wasn’t looking for this job. I felt like it was a calling," said Price. "And it’s kind of the same thing. I wasn’t really looking to leave. But the timing just popped up to be good.”

And she says she’s had plenty of proud moments over the last decade.

“I’d like to be remembered for being in this community.  For being out among the people.  Maybe, somebody yesterday said the people’s mayor.”

RELATED: Fort Worth Mayor Betsy Price will not seek re-election