Inside Texas Politics: Harris County judge says 'We can't give up early again' on COVID-19 precautions

When asked if she was expecting another surge of cases to come in around school reopenings amidst Labor Day, the judge said "absolutely." 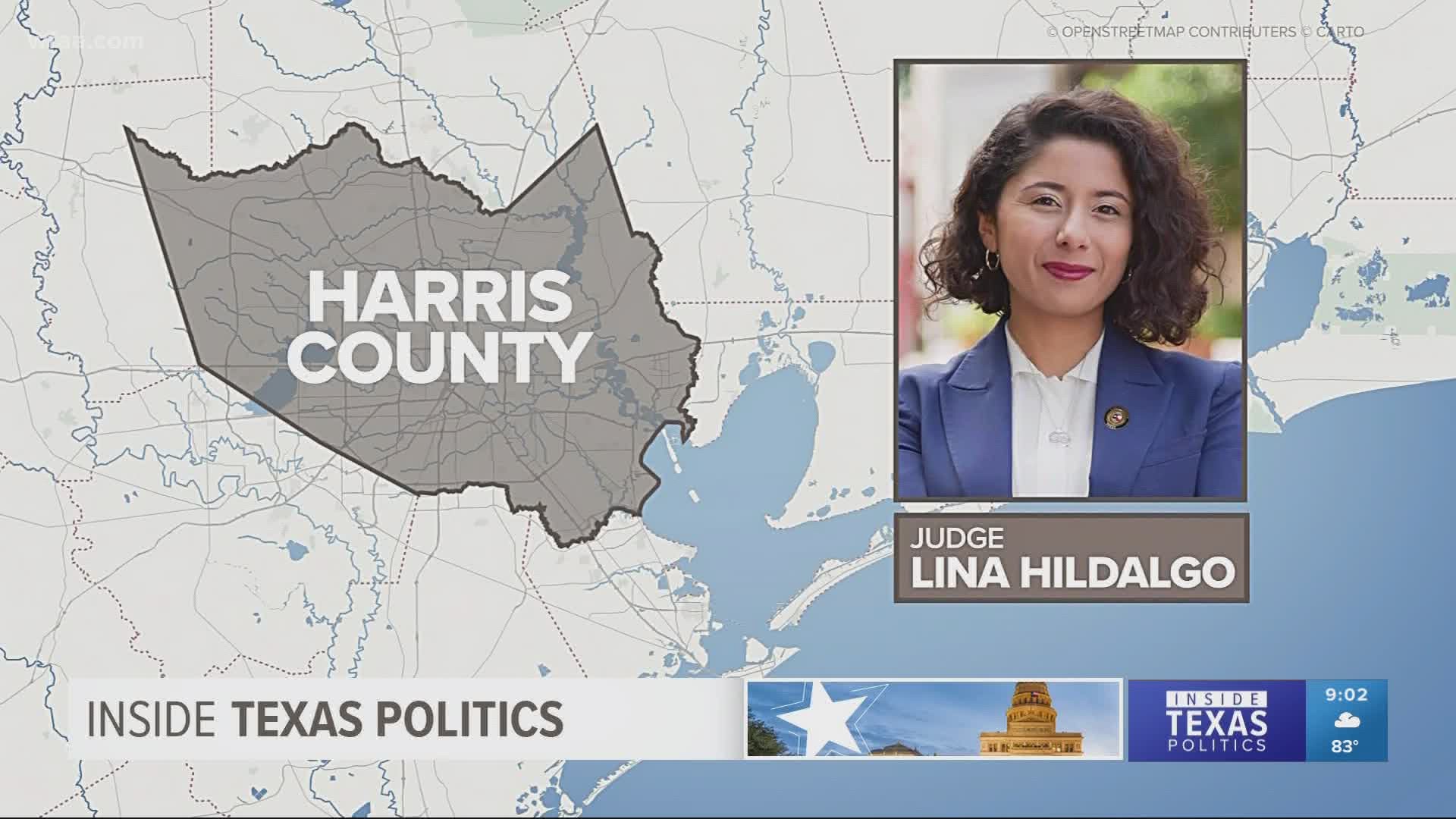 DALLAS — It’s hard to read lips through masks, but Harris County Judge Lina Hidalgo made one thing clear on Inside Texas Politics: there will be no tax increase this year.

“Right now, people need us more than ever. It’s not a time where we can raise taxes,” Hidalgo said.

She said because of that, state and local governments need federal budget support.

While a tax increase is off the table, layoffs aren’t. Hidalgo said they’ll have a much better idea of what might be needed in September.

“If 2008 is any indication—  the recession—  then it’s certainly a possibility. And it’s something we’re bracing for," she said. "We’re bracing for very tough times next year.”

The judge says they’re still helping residents. This week, for example, they announced a $32 million program to buy computers and hot-spots for students during the pandemic. And the county released a road map to reopening schools safely.

When asked if she was expecting another surge of cases to come in around school reopenings amidst Labor Day, the judge said "absolutely" and warned Texans not to "give up early again."

"We have to make sure that before we proclaim victory and start reopening things, that that hospitalization curve comes way down to 10, 20% of peak, that those cases come way down... that positivity rate [comes down]," Hidalgo said. "Right now, things are looking a little bit better, but I can tell you at least here, our cases are still very concerning, our deaths still very concerning, and the hospitalization rates, while lower, are still incredibly high."

The state director for Joe Biden's presidential campaign is confident the party can turn out tens of thousands of new voters on Election Day.

The presumptive Democratic nominee announced this past week he was selecting Sen. Kamala Harris of California as his running mate.

New voters are essential for Biden to become the first Democrat to take Texas since 1976.

“This is the largest presidential investment a campaign has made in Texas in modern history,” Rebecca Acuna said. 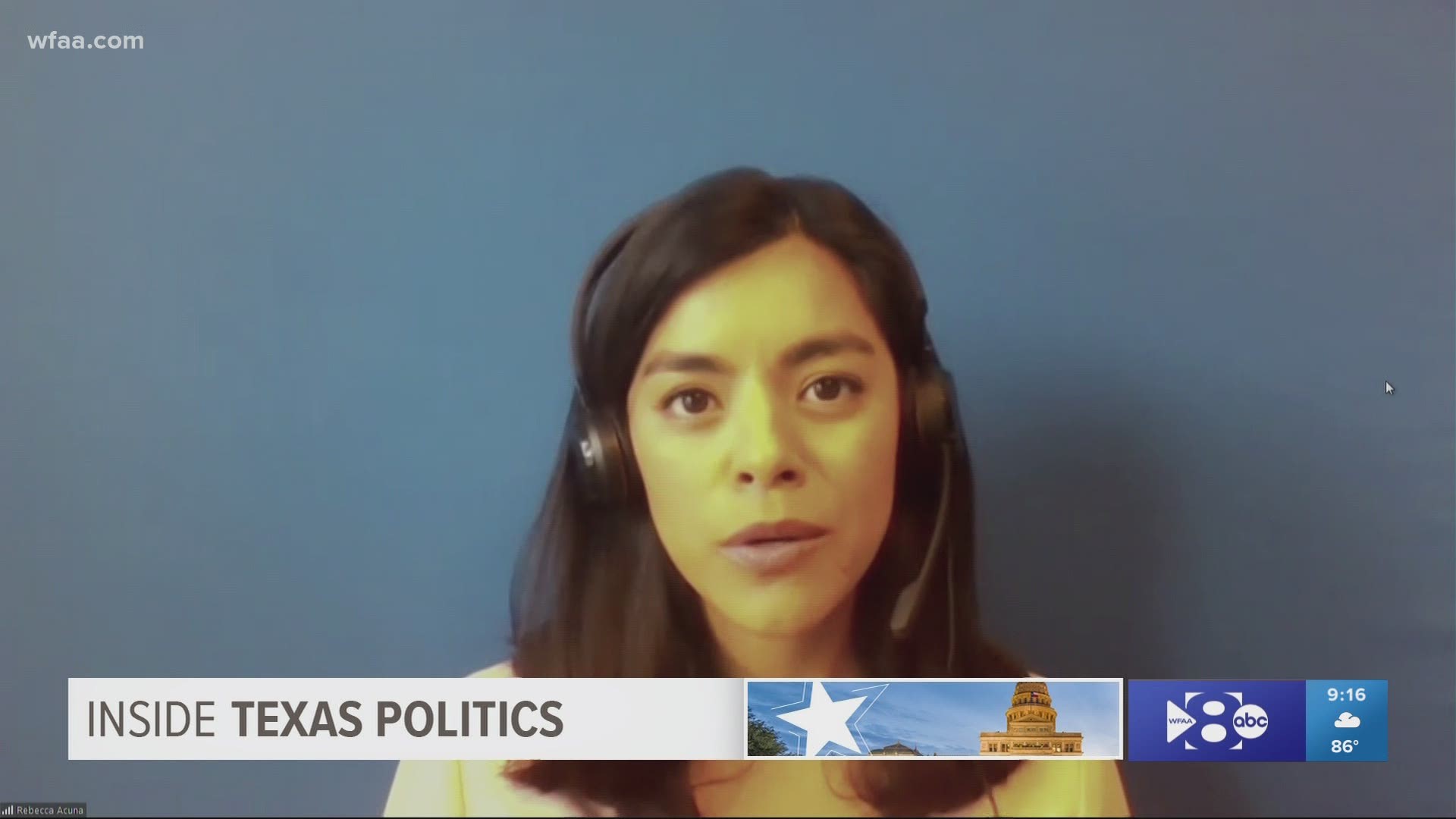 Acuna said she’s hired a senior staff of Texas natives who have worked inside campaigns and government for years here.

Texas is one of 15 states where the campaign plans to spend a total of $280 million on television and digital advertising.

One important focus for the campaign’s voter outreach will be the red, rural counties across the state. Acuna said the campaign and its partners reached two million voters over two days last weekend.

“We’re not taking any votes for granted. We are reaching out to voters all across the state,” Acuna said. “What is happening is that because Texans finally believe that we can make a difference, that their votes matter, we’re seeing volunteers from every single part of Texas."

She said volunteers were reaching out to voters across the state, including in rural communities.

When asked for his reaction to the Austin City Council’s decision to dramatically cut the police budget, the Travis County GOP chairman did not hesitate.

“Outrage, honestly,” Matt Mackowiak said. “I don’t know if I can remember a more irresponsible decision being made by our city government in my lifetime.”

The Austin City Council voted unanimously to cut the police budget by $150 million. That’s about a third of the overall police budget.

Mackowiak says the party fully supports discussion about police reform. While he says the killing of George Floyd certainly makes that a worthwhile debate, he believes a cut this drastic is anything but thoughtful reform.

“If they want to argue they’re trying to reduce crime by addressing the symptoms or causes of crime, that’s one thing," he said. "We need to ask why social programs haven’t worked up to this point and why more money is the answer. But you don’t reduce crime by cutting the police budget by a third.”

Gov. Greg Abbott also reacted to the cuts, saying lawmakers would take this up during the next legislative session in January.

“You’ve seen them use preemption on a couple other issues like fracking bans and the Uber/Lyft ban that was occurring in Austin and some other cities. You could see a preemption approach,” Mackowiak said. “You could, perhaps, see the state try to take the police power away from the city and have it be a state function, given it’s the state Capitol.”