Mayor Turner has also been added to Bloomberg's campaign team. 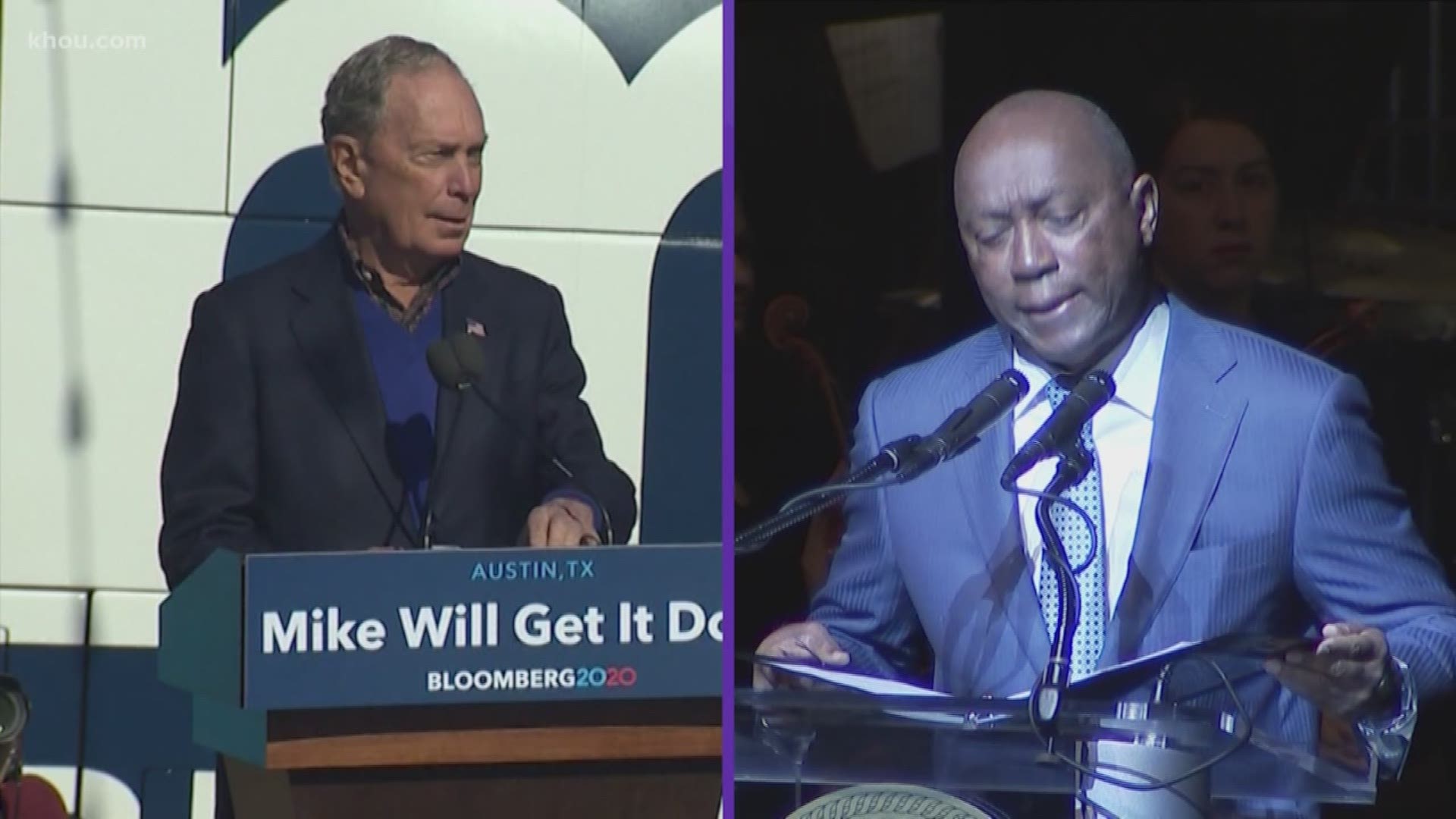 HOUSTON — As we close in on Super Tuesday, Houston Mayor Sylvester Turner is putting his support behind Democratic presidential candidate Michael Bloomberg for the president.

The announcement came early this morning.  Bloomberg, a 77-year-old billionaire and former New York City mayor, is in town for a campaign event as he continues his  push throughout Texas leading up to the state’s primary on March 3.

The campaign also announced that Mayor Turner will become national co-chair for Bloomberg's Infrastructure Council.  In that role, Turner will advise on strategy and policy.

“As Mayor, I know that cities are ultimately made up of two things – people and places – and to be a truly successful city, we need to invest in both. And not just some people and some places, but all people and all places. We cannot allow American cities to be divided into cities of haves and have nots. That means creating economic opportunity in neighborhoods that have historically been overlooked, and it means doing the hard work of overhauling our infrastructure so that citizens can go about their lives more efficiently and safely,” said Mayor Turner in a release sent out by the Bloomberg campaign. “A key to that effort is finding partners who are willing to work hard alongside us, and I’ve found that partner in Mike Bloomberg. Mike’s been a mayor himself, so he knows that we need more federal dollars for local projects, and that cities can go farther when they have leaders in Washington who are responsive to their concerns. As mayor, Mike embraced New York’s diversity and made smart investments that brought better infrastructure and greater opportunity to all five boroughs. We need a president who knows how cities run. It’s why I’m proud to endorse Mike for president, and I look forward to sending him to Washington in November.”

Since entering the presidential race last November, Bloomberg has focused a lot of attention on the Lone Star State. He’s hired a state director, added nearly 20 field offices, and has spent more than millions on advertising throughout the state.

He’s also taken a bit of an unconventional approach in skipping other state’s primaries and caucuses—Iowa, New Hampshire—and instead focused his attention on Super Tuesday, a day when 14 states, including Texas, will hold their primaries.

The Democratic presidential candidates will be vying for 228 delegates in Texas, the second most of any state behind California.

Turner isn’t the first Texas politician to support Bloomberg—or the first Houston mayor, for that matter.

Former Mayor Bill White said Bloomberg “is the kind of leader our nation needs right now. He knows how to get things done and will focus on issues that matter to most Texans: good jobs, accessible health care, and practical steps to mitigate climate change.”

According to the Texas Tribune, his other Texas endorsements include state reps. Julie Johnson and Joe Deshotel; and John Cook, the former mayor of El Paso.

Bloomberg, a native of Medford, Mass., made a fortune after founding Bloomberg, L.P., a financial and data news company in 1981. A lifelong Democrat, he got his start in politics when he was elected New York City mayor as a Republican in 2002, shortly after the Sept. 11 terrorist attacks. He held that office until 2013.

During rallies for his presidential campaign, Bloomberg has cited his time as mayor that helped lead to creating nearly 500,000 jobs, expanding health care to some 700,000 New Yorkers, and cutting the city’s incarceration rate almost 40 percent.

Editor's note: A previous version of this story mentioned in error that Bloomberg had been endorsed by Beto O'Rourke and Julian Castro.  We regret the mistake and have corrected.

RELATED: Who is running for president in 2020?