“The Constitution does not provide the right to riot, to rob, to loot, to set fires, to physically harm anyone or anything,” the governor said Thursday. 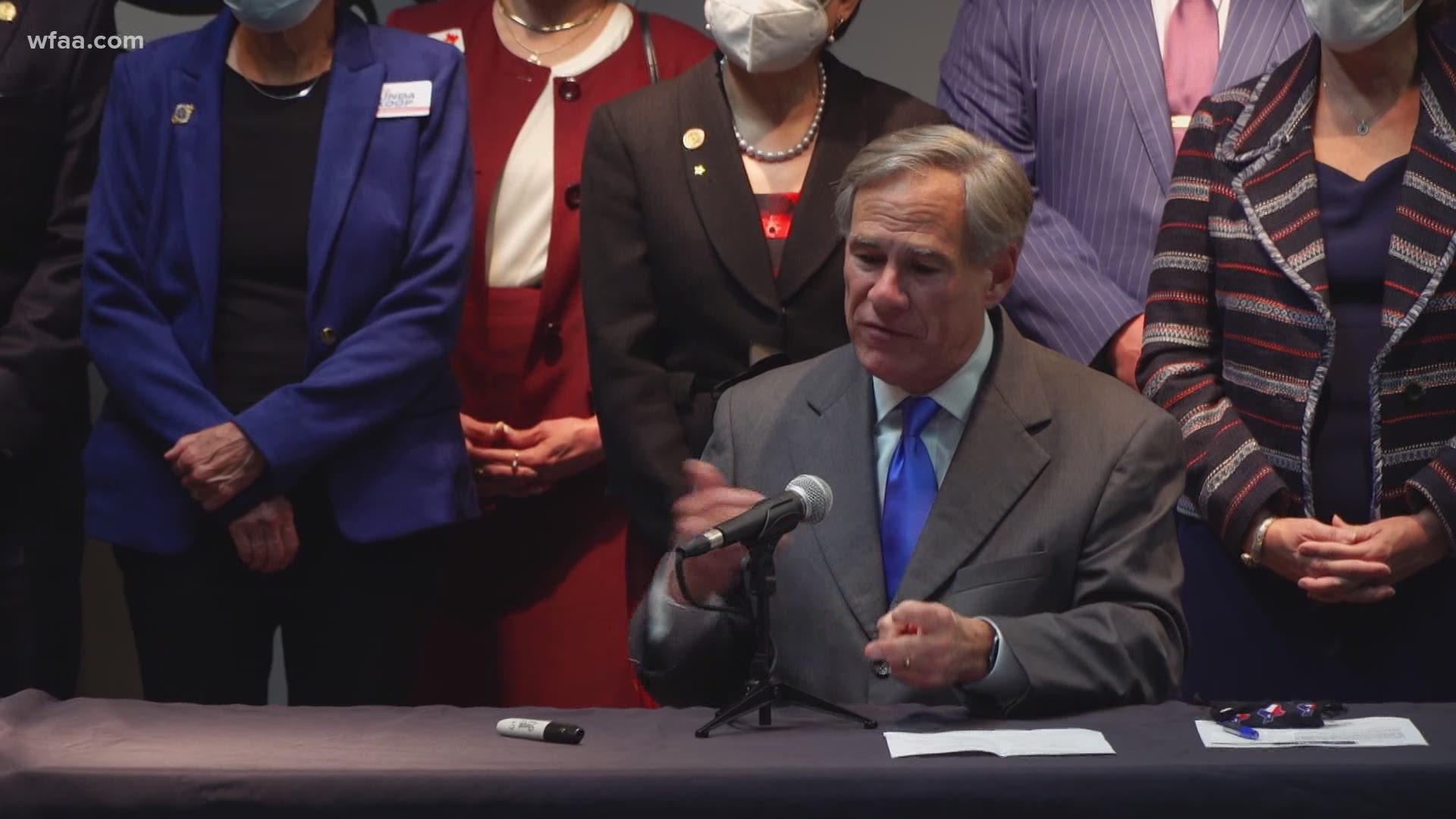 Gov. Greg Abbott proposed legislation Thursday that, if approved, could make certain actions during protests a felony, including destroying property and aiding or abetting an organization that takes part in a riot.

Abbott made the proposals after a volatile summer in many cities across the country and in Texas which led to major demonstrations and destruction of businesses, including in Downtown Dallas, following the death of George Floyd.

“The Constitution does not provide the right to riot, to rob, to loot, to set fires, to physically harm anyone or anything,” Abbott said at a noon news conference in Dallas.

Protestors or rioters who block hospital entrances could face a felony and mandatory jail time. That hasn’t happened in Texas, but in California, a handful of protesters were blocking emergency entrances and exits to a hospital last week where two sheriff's deputies were wounded, according to the Associated Press.

Abbott said striking a law enforcement officer during a riot, including throwing bottles, bricks or other projectiles, would lead to a mandatory jail sentence of at least six months. Assault on a public servant is already a felony.

The governor's visit to Dallas was announced by Texans for Greg Abbott, a political organization.

Texas Democrats responded to the new proposals, saying it was a distraction from the governor's "coronavirus failures" and said he is out of touch with real issues.

"Instead of talking about the issues that matter most to Texans -- ending the coronavirus crisis, protecting and expanding healthcare coverage, and building our economy back better -- Abbott chose to introduce nonsensical proposals that will not hold up in court," said Texas Democratic Party Chair Gilberto Hinojosa in a statement.

The American Civil Liberties Union reacted to Abbott's comments, saying that he is on the wrong side of history and that he is villanizing those who wish to assert their constitutional rights, rather than heed calls for reform.

"Feeding into what are simply trumped up conspiracy theories about outside agitators, it appears now that Abbott seeks to trample over the Constitution by threatening to criminalize organizations who assist and mobilize individuals to exercise these rights," said Andre Segura, legal director fir the ACLU of Texas. "We have not seen the language, but the Governor’s words matter, and as described, the Governor’s proposal should raise alarms for every American."

The governor also proposed that the use of fireworks at a riot would be a criminal offense. Using lasers to target officers and causing injury or destroying property in a riot would be felony offenses. All would have mandatory jail time and must remain in jail until their first court appearance.

He said some people in Dallas who were arrested and taken to jail during the summer protests were back on the streets "30 minutes later."

Tuegel represents some of the protesters who say they were injured by Dallas Police during the demonstrations in May and June.

"My question for the governor - and I know what my clients who’ve been peaceful protesters want to know - is where is the justice for them and the accountability for them? What about the officers who injured them when they were protesting peacefully?" she asked, pointing out that the Dallas County District Attorney is investigating how some officers treated demonstrators.

The DA's office also dismissed charges against several of Tuegel's clients who were taken into custody.

Abbott used the event on Thursday to urge politicians and all Texans to sign the Back the Blue pledge, which discourages efforts to defund police departments in Texas.

Dallas Police Association President Michael Mata said police departments don’t need to be defunded and cities should use other money to directly affect those causes.

He said the department is already understaffed by 600 officers.

"Everyone in this room at some point will have to call 911. We are the ones who are gonna come," he said.

The Dallas City Council on Wednesday night approved a $1.4 billion general revenue budget for the 2021 fiscal year on a divided 9-6 vote.

The vote came after a more than 12-hour meeting and amid public calls for reduced funding for the Dallas Police Department. The budget will increase spending for police by nearly $8 million.

Abbott first proposed legislative changes after the Austin City Council cut its police budget. The council voted to move $150 million from the city's police department budget to other services.

In a video posted on Abbott's YouTube channel Sept. 9, the governor said budget cuts invite "crime into our communities and it threatens the safety of all Texans, including our law enforcement officers and their families."

At a news conference in August, Abbott announced a legislative proposal that freezes property tax revenue for cities that vote to defund police departments.

Following George Floyd's in-custody death in May, people across the country have called for defunding police departments.

Teresa Woodard contributed to this report.