As of Tuesday night, the Democratic presidential primary was too close to call in Texas, but Sen. Bernie Sanders had the lead. 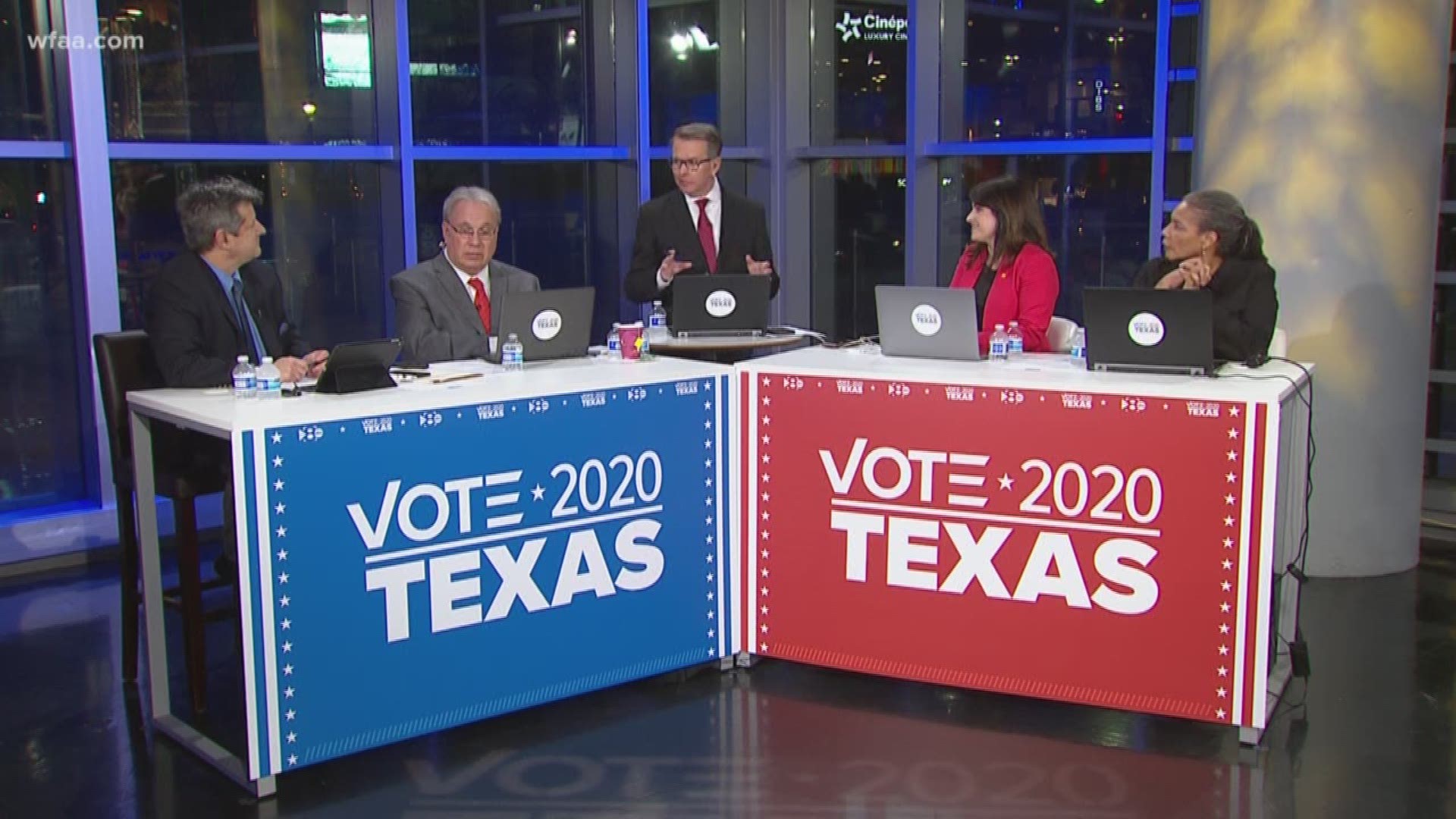 Updated with results at the end of Tuesday.

Election results Tuesday will determine who will face off during the presidential, U.S. Senate and House races in the general election in November.

Polls closed at 7 p.m. The latest election results are here.

Five Democrats now remain in the race for that party's presidential nomination after Sen. Amy Klobuchar, former Mayor Pete Buttigieg and Tom Steyer all dropped out in the days leading up to Super Tuesday.

Shortly after midnight on Wednesday, the AP announced former Vice President Joe Biden was projected to win the Democratic race in Texas. Biden started off the night down to Sen. Bernie Sanders in early results, but made up ground over the course of the night to take the lead permanently.

RELATED: Who is running for president in 2020?

Whoever wins the Democratic nomination will then compete with President Donald Trump in November for the presidency.

Election results in the presidential Republican and Democratic primaries:

Texas had 12 Democrats running to represent the party in the race for U.S. Senate against Republican Sen. John Cornyn in November.

Cornyn was quickly named the projected winner on Tuesday, easily advancing to the general election in November. One of the challengers facing Cornyn in the Republican primary was Dallas investor Mark Yancey, the former owner of the WNBA team the Dallas Wings.

The big question is whether he can once again win in November. He was first elected in 2002, winning his second term in 2008 and third in 2014.

RELATED: Meet the Texas Democrats running for US Senate

Democratic Senate candidate MJ Hegar has advanced to a runoff election in Texas after falling short of capturing the nomination outright.

Election results in the U.S. Senate race in Texas:

Hegar raised more than $3 million during the primary campaign, more than any of her rivals. She says she wanted to be a military pilot when she was young but was told that wasn’t an option for a little girl.

After graduating from the University of Texas at Austin, she became a commissioned officer in the Air Force and served three tours in Afghanistan as a combat search and rescue pilot. She was shot down during one of her missions and received a purple heart for injuries she sustained.

Hegar entered politics in 2018, running for a seat in Congress to represent an area north of Austin that includes Fort Hood, but she narrowly lost to incumbent U.S. Rep. John Carter.

North Texan West has been in public service for nearly 30 years. Many politicians and supporters across Texas describe him as a fighter for change. Now, West wants to take the fight to Washington, D.C.

During his tenure as an elected official, he has been an advocate for education, criminal justice reform, fair wages, expanding healthcare opportunities, defending women’s rights to choose, immigration reform and common-sense gun legislation among other issues.

There may not be a more wide-open race in the U.S Congress than in Texas’s 24th Congressional district.

Marchant won the seat by just 3 percentage points in 2018, meaning the seat is up for grabs for either party in November.

And it’s a crowded primary field on both sides.

Five candidates are running for the Republican nomination, while Democrats have six trying to become the nominee for the fall.

Democrats include Kim Olson, who ran for Texas Agriculture Commissioner and narrowly lost in the statewide race in 2018. Jan McDowell has run for the 24th Congressional seat twice and was defeated by Marchant both times, coming within 3 percentage points in 2018.

Other Democrats include Candace Valenzuela, a Carrollton Farmers Branch ISD trustee since 2017, John Biggan, who ran for Congress in 2018, Sam Vega, and Richard Fleming.

As of late Tuesday, Van Duyne had a commanding lead, while the Democratic race was closer, with Olson leading Valenzuela.

With crowded fields on both sides, it’s possible the primary will end up in a runoff for the top two vote-getters before one from each party advances to November. 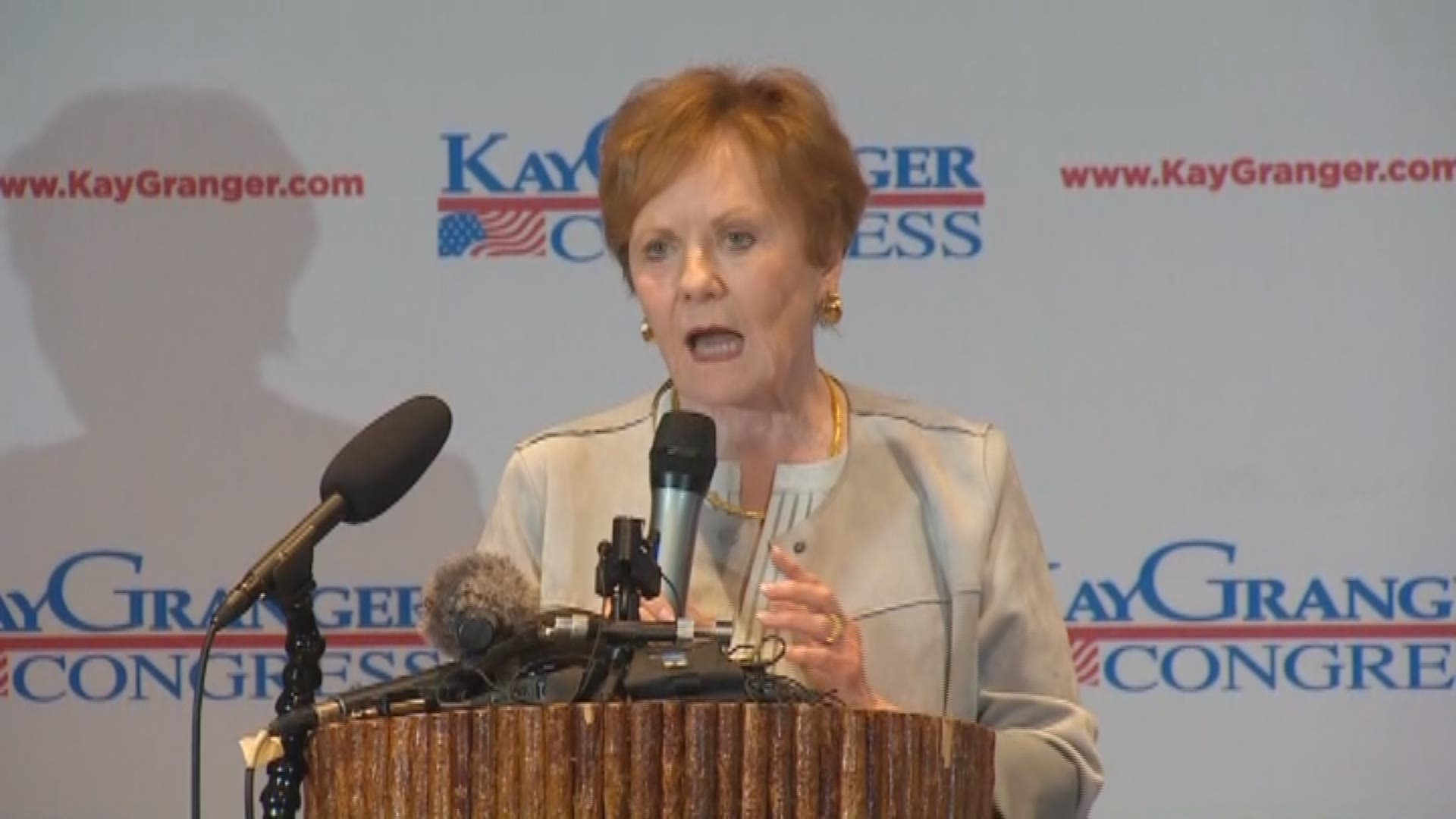 U.S. Rep. Kay Granger, R-Fort Worth, faced a tough primary on Tuesday as well, thanks to a challenge from former Colleyville City Councilman Chris Putnam for the District 12 seat. But Putnam conceded the race late Tuesday, allowing Granger to move forward.

Incumbent Democrat Colin Allred, a first-termer in Dallas, is in a swing district. He defeated Pete Sessions in 2018. He is running unopposed in the primary.

Collins and McLendon are considered the frontrunners in the race, and were in the lead as of the end of Tuesday.