A big concern surrounding Georgia’s “heartbeat” law is whether a woman could be prosecuted for terminating a pregnancy. 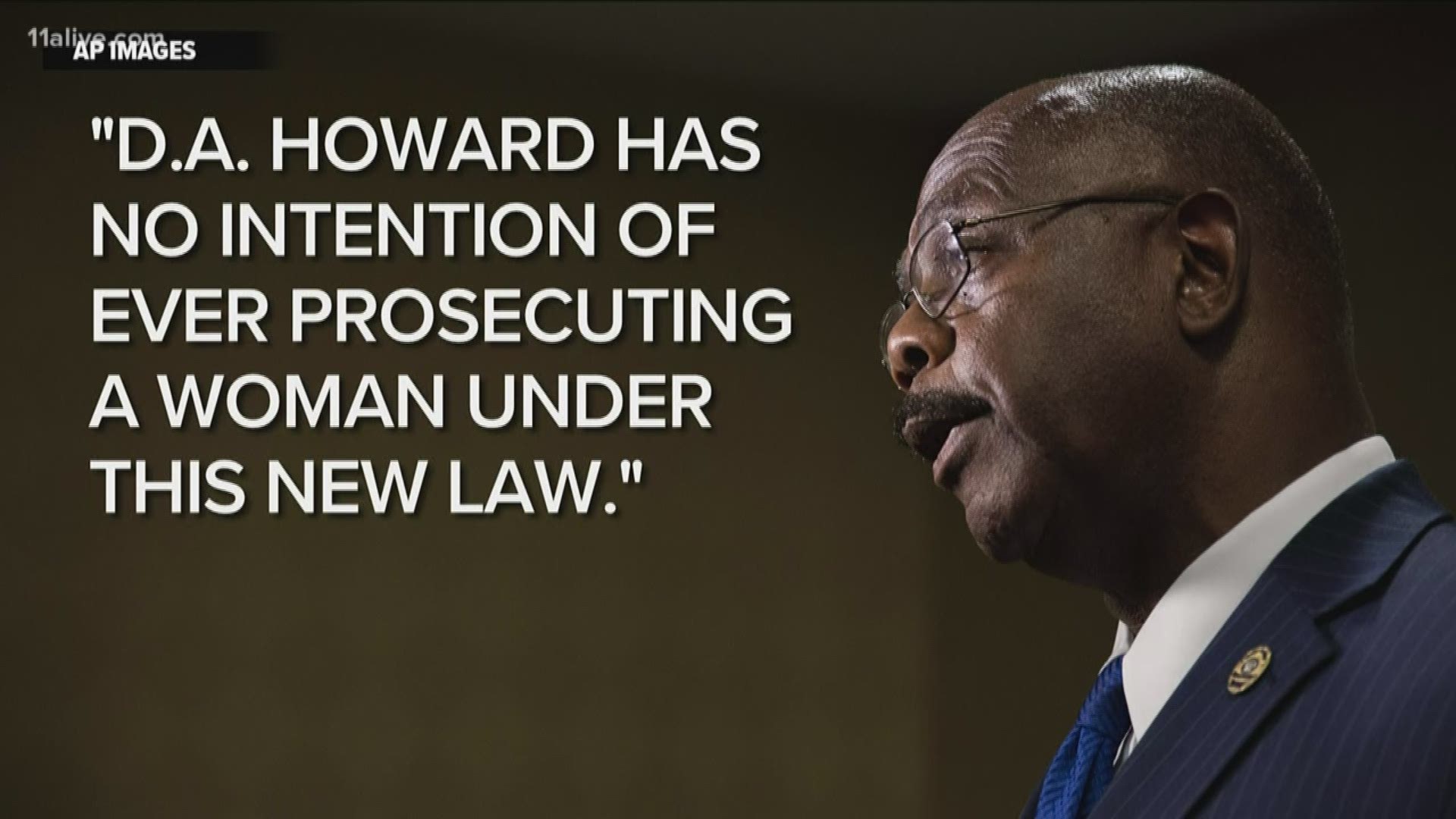 District attorneys across metro Atlanta have said they would not prosecute a woman for seeking out an abortion in Georgia under the new “heartbeat” law, which would criminalize abortion after six weeks – when a fetal pulse is detected.

Questions about the legality of the bill have been swift from the medical and legal community about how the law would be enforced. The law makes certain exceptions for cases of rape or incest and if the woman’s life is endangered by the pregnancy.

The Fulton County District Attorney's Office said it has no plans to prosecute women under the new law. That extends to doctors, nurses and other healthcare providers as well. He intends to follow the Roe v. Wade decision.

“DA Howard has no intention of ever prosecuting a woman under this new law,” said Chris Hopper, director of public affairs for the Fulton County District Attorney’s Office.

OTHER NEWS: How a Georgia mother allowed her boyfriend to impregnate her 10-year-old

The same is true in Gwinnett County.

“In terms of the what seem to be the most pressing questions, I believe that under the current law it is not possible to prosecute a woman who has an abortion even if it is self-induced for either Murder or Unlawful Abortion. Therefore as a matter of law (as opposed to politics) this office will not be prosecuting any women under the new law as long as I’m District Attorney. As far as abortion providers, There is a very clear statute in existence which is unmodified by HB 481 which describes the circumstances which would lead to prosecution. I started here in 1981 and we have never had such a case in Gwinnett County.

RELATED: What to know about new abortion law: Law professor weighs in

“As District Attorney, I took an oath to uphold both the U.S. and GA Constitutions. And our U.S. Supreme Court, in deciding Roe v. Wade, determined that every woman has a fundamental right to privacy which protects their right to choose. I have reviewed HB 481, the related statutes, and case law, and have spoken with members of the Georgia State Legislature. As a result, I have grave concerns about HB 481, its constitutionality, and what it seeks to accomplish. This law obviously sets out to criminalize abortion in the State of Georgia. The question is – who will be held criminally responsible? The law, as written, is either silent or ambiguous, at best, on this question.

"Doctors, nurses, anesthetists, health care providers, office receptionists- virtually anyone who either performs or assists in performing or arranging what is currently a legal medical procedure- could potentially be charged under this statute. Arguably, under such legal theories as Party to a Crime, Conspiracy and/or Solicitation to Commit a Crime, even a friend or ride share driver, if he or she knowingly and voluntarily transported a woman to a hospital or doctor’s office for an illegal abortion under this law, could face prosecution.

"Further, the bill does not specifically exclude the woman receiving an abortion from criminal liability. This could have been easily accomplished by inserting a sentence in this law or by amending other statutes, such as Murder, O.C.G.A. sec. 16-5-1, to address HB 481. While analysis of case law and other statutes, such as Feticide, O.C.G.A. sec. 16-5-80, seems to make clear that a woman cannot be prosecuted for obtaining an abortion, this new law muddies the water and may open the door for this type of prosecution.

"There is no language outlined in HB 481 explicitly prohibiting a District Attorney from bringing criminal charges against anyone and everyone involved in obtaining and performing what is otherwise currently a legal medical procedure as decided by United States Supreme Court opinion and precedent.

"As District Attorney with charging discretion, I will not prosecute individuals pursuant to HB 481 given its ambiguity and constitutional concerns. As a woman and mother, I am concerned about the passage and attempted passage of laws such as this one in Georgia, Alabama, and other states. I believe it is a woman’s right to make decisions regarding her own body and medical care, including, but not limited to, seeking an abortion, as upheld by the United States Supreme Court."

In Cobb County, District Attorney John Melvin said he would "absolutely not" prosecute a woman for seeking out an abortion -- but he didn't say that he wouldn't pursue cases against those held liable under law -- including doctors, nurses and pharmacists.

"All prosecutors take an oath to enforce the law of the state of Georgia. We certainly have discretion within each law ... but to whole say 'I'm not going to prosecute a law,' that would be unethical for any prosecutor to take that position," Melvin said. "So yes, we will take a look at any criminal law violation in Cobb County ... but to start saying women could be prosecuted for murder is far from the scope of reality."

"HB 481 is unconstitutional because it is contrary to the U.S. Supreme Court decision in Roe v. Wade, which is presently the law of the land. This office will not prosecute any woman for decisions regarding her own personal health, nor any physician or other healthcare professional, under HB 481," Pattillo said in a statement to 11Alive.